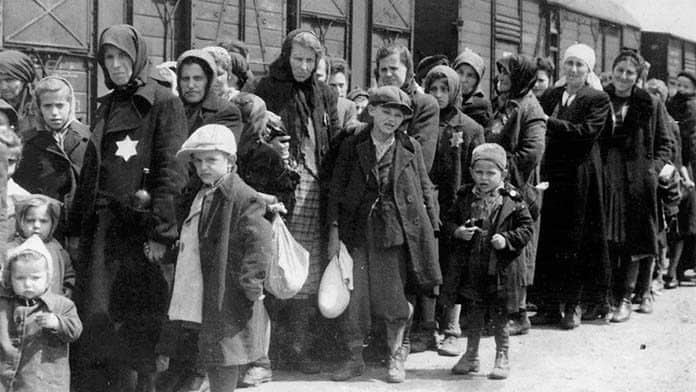 On the 75th anniversary of the liberation of the Auschwitz death camp, David Glanz looks at the causes of the Holocaust and how it emerged from Hitler’s fascist ideology

We were taken by train to Auschwitz. I remember the masses of people, the SS soldiers with high boots and big barking dogs. Everyone had to get undressed. I had to put on a striped dress and wooden clogs, no socks, nothing else. They cut off my beautiful plaits and threw them into a pile and then shaved me bald. I was given a tattoo, No 26877, on my left arm. I discovered later we were the first transport in which people were not automatically sent to the gas chambers.

Seventy-five years ago, in early 1945, first Russian and then British and US troops liberated Nazi concentration camps across occupied Poland and Germany. What they found shocked the world.

Dr Douglas Kelling, a medical officer who helped liberate Dachau, recalled: “When we got there, the furnaces were still warm, the odour of burning flesh was still strong … Naked bodies numbering 100 were piled like cordwood outside the furnace area. Outside, 3000 bodies were piled in boxcars. They had been just thrown in, with legs and arms hanging out doors.”

The camps were killing factories, designed to massacre thousands of victims daily. In total, the Nazis murdered six million Jews in an attempt to “solve the Jewish problem” through genocide.

Jews were not the only victims. The Nazis also killed 500,000 Roma and Sinta (Gypsies) and millions of some of the Slavic peoples they despised as sub-humans (especially Poles and Russians).

The first inmates of the camps after the Nazis came to power in 1933 were communists, socialists, union militants, Jehovah’s Witnesses and LGBTI+ people. The first to be slaughtered in mass numbers were people with disabilities.

After 1945, the world seemed united in its determination to declare “Never again”.

But today we are witnessing a resurgence of the far right, from the rise of Alternative for Germany, to the Christchurch massacre to the fascist attacks on refugees in Greece.

Mass revulsion at the horrors of the Holocaust means most of the far right talk in code rather than display their anti-semitism openly.

As Australian Nazi Neil Erikson wrote to fellow Nazi Blair Cottrell: “Stick to the Muslim shit and Cultural Marxism for max support … do Jews later you don’t need to show your full hand,” to which Cottrell replied: “It will take years to prepare for the Jewish problem. If any of us come out with that now we would be slaughtered by public opinion.”

Others are not so coy. The US far right marching in Charlottesville in 2017 chanted, “The Jews will not replace us.” And a report published by the Executive Council of Australian Jewry in November recorded 368 anti-semitic incidents over the previous year, a 30 per cent increase.

So understanding the Holocaust is not a historical question. It goes to the heart of resisting the rise of the far right today.

There are two common theories that attempt to explain the Holocaust. The first, widely popularised by author Daniel Goldhagen, is that German identity was grounded in a profound anti-semitism and that ordinary Germans became Hitler’s “willing executioners”.

Goldhagen’s argument runs counter to a number of factors. The Nazis never won majority electoral support, with the overwhelming bulk of the German working class remaining loyal to the socialists and communists until their parties were smashed in 1933.

Even under the Nazi dictatorship, resistance continued. In June, July and August 1935, for example, the Gestapo recorded 13 industrial disputes and 39 acts of sabotage. At an Opel factory, hoses were turned on machinery overnight, wrecking 200 motors destined for the army.

The exiled socialist party reported, “Ninety per cent of the workers beyond all doubt are convinced anti-Nazis” even while noting that the potential for collective resistance was extremely limited.

As soon as the war ended, German workers established more than 500 Anti-Fascist Committees to purge all Nazi influence. In Leipzig, 100,000 marched on May Day 1945, the day after Hitler’s suicide—one fifth of the population.

Goldhagen’s thesis has a more fundamental problem. Explaining the Holocaust as a uniquely German phenomenon risks disarming us in the face of the rise of the far right globally.

As the head of ASIO reported last month: “In Australia, the extreme right-wing threat is real and it is growing. In suburbs around Australia, small cells regularly meet to salute Nazi flags, inspect weapons, train in combat and share their hateful ideology.”

The other common way of understanding the Holocaust is simply as the most extreme case of the general evils of modern capitalist society.

This, too, is inadequate. The Holocaust was certainly a product of capitalism—it required railway systems, the manufacture of poison gas and munitions, and a massive industrialised military and bureaucratic machine.

But capitalism has brought us many other horrors, from the attempted genocide of Aboriginal people to the dropping of atomic bombs on Hiroshima and Nagasaki, and the racist policies that led to mass starvation in Ireland in the 19th century and in Bengal in the 20th.

To make sense of what made the Holocaust unique as an act of deliberate, industrialised mass murder, we need to understand Nazism.

Germany after World War One was a society in turmoil, with revolutionary upheavals in 1918-19 and 1923 followed by the onset of the Great Depression in 1929.

Hitler build the Nazi Party and its mass paramilitary forces out of the ranks of the middle classes—the shopkeepers, farmers and small business people who felt trapped between the power of big business and the power of the working class and who were driven to desperation by the Great Depression.

He bound together his supporters with a blend of anti-semitism and fake anti-capitalist rhetoric.

As British Marxist Alex Callinicos writes: “Nazi ideology was anti-capitalist in the restricted sense of holding ‘Jewish finance capital’ responsible for all the ills of German society. Counterposed to Weimar realities was the Utopia of the Volksgemeinschaft—of a racially pure national community where German capital and labour were reconciled and the small producer finally in the saddle.

“Here we see the centrality of racism to National Socialism. Their supposedly common biological ‘race’ united Germans of all classes against the alien Jews and against other inferior races, especially the Slavs, with whom, according to Hitler’s Social Darwinism, Germans were in competition for territory and resources in the East.”

In Hitler’s world, the Jews were responsible for communism and hence for the revolution of workers, soldiers and sailors that ended World War One, contributing to Germany’s defeat. Never again, he pledged, would Jews be allowed to deliver such a stab in the back.

Speaking in January 1939 he declared: “If the international Jewish financiers in and outside Europe should succeed in plunging the nations once more into a world war, then the result will not be the Bolshevising of the earth, and thus the victory of Jewry, but the annihilation of the Jewish race in Europe!”

While some of Hitler’s big business sponsors found his anti-semitism distasteful, and worried about whether Hitler could hold his mass movement in check, they all welcomed his anti-communism, bringing him to power so that his 400,000-strong street army could crush the left and the workers’ movement.

Once Chancellor, Hitler wiped out those supporters who took his anti-capitalist language too seriously. Having reassured his millionaire backers, he used the power of the state to establish a Nazi dictatorship that, while defending German capitalism, had its own ideological agenda.

Hitler’s primary aim was to attack Poland and then the Soviet Union—simultaneously striking a blow at communism, gaining land for German expansion and settlement to the east, and attacking the mass Jewish populations of Poland, Russia and the other eastern states.

From the start the Nazi leadership made it clear that this was not just going to be just another war but a war of extermination, waged against inferior races—the subhuman Slavs and their “Jewish-Bolshevik” masters—to win living space for the German folk.

Mass murder was built into the operation from the start. As the German army drove eastward, the violence against non-combatants escalated—first against communist commissars, then against Jewish communities.

Initially, the massacres were carried out by shooting but the Nazis became frustrated at the slow pace and worried about the impact on their soldiers.

SS officer Herbert Langer pioneered the first death camp in Chelmno in central Poland in 1941. The murder operation consisted of three trucks where opponents were gassed with carbon monoxide.

As the war began to go badly, the Nazis intensified anti-semitism to try to hold together their support. They became desperate to complete their mission of wiping out the Jews.

At the Wannsee Conference in Berlin on 20 January 1942, SS chief Reinhard Heydrich and various officials planned the so-called Final Solution.

A few months later, a consignment of Jews arrived at the Auschwitz death camp, the first of a million to be sent to the gas chambers there.

Modern capitalism made such slaughter possible, but Jews were not murdered for profit. If anything, the Holocaust diverted resources that could have been used to fight the war.

Nazism represented the coming together of industrial capitalism and a bestial anti-semitism—a mass movement of racist counter-revolution.

It is vital that we learn from the horrors of the Holocaust. Nazis may use democratic channels to build their support but their aim is the eradication of all working class organisation and the mass murder of those they deem sub-human.

We must respond with unrelenting determination to block them at every turn and to build a socialist society in which anti-semitism and all forms of racism are consigned to the history books.

Brazil has a far right president after Jair Bolsonaro won 55 per cent in the final run-off election. His surge in support is a product of Brazil’s economic collapse and disillusionment with the Workers’ Party.