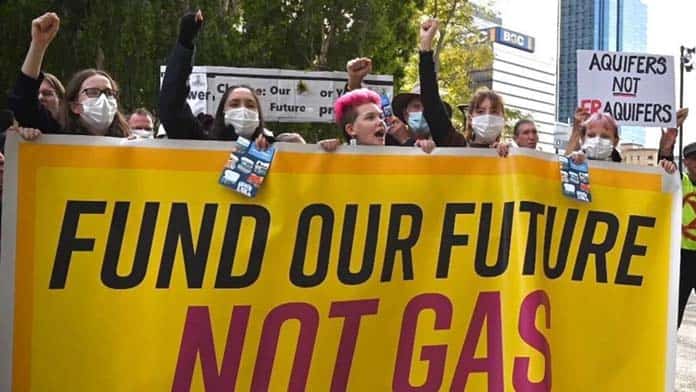 Santos’ plans for 850 gas wells in the Pilliga forest and surrounds would set off a carbon bomb in the middle of a climate emergency. It would also have a devastating impact on fragile ecosystems, desecrate Gamilaraay lands and threaten the precious water in the Great Artesian Basin.

Aboriginal activists from Gamilaraay Next Generation, and many supporters, rallied in Narrabri on 5 February during a “festival of Rugby” sponsored by Santos, while trade unionists from Workers for Climate Action in Sydney and Pasifika activists from 350.org in Brisbane led solidarity protests.

The Narrabri gas project is the tip of the ice-berg for a gas industry vision that would open up CSG fields the size of Tasmania, stretching from the Queensland border down into the Hunter.

These plans are being fueled by the Morrison government’s disastrous “gas-fired recovery” policy, which offers gas companies easier approval processes and public subsidies.

Santos’ Narrabri project was placed on a list of priority projects and quickly waived through the Commonwealth approval process in November.

A coalition of farmers are challenging this approval in court, arguing that it failed to consider the climate implications of the project, or the environmental impacts of associated pipeline infrastructure.

Morrison promotes gas as a “low emissions technology” and a “transition fuel” to meet the challenges of the climate crisis.

Expanding gas is seen by the Liberals as a way of managing the shift of Australian capitalism away from ageing coal-fired electricity, while consolidating the power of the resources industry and leaving fossil fuels at the heart of the system.

There are currently plans for up to $56 billion of new gas pipeline infrastructure in Australia. A recent report by the Global Energy Monitor found that this would allow pumping of greenhouse gases equivalent to thirty-three 1000MW coal-fired power stations.

The Narrabri project is an important piece in a jigsaw of gas infrastructure planned in NSW, which includes two major new gas pipelines and five gas-fired power stations.

Morrison has declared this investment necessary due to gaps looming in power generation capacity in NSW, as the ageing Liddell coal-fired plant reaches the end of its life. He has given until 30 April for AGL and other private companies with planned gas power stations to commit to these investments, otherwise $610 million of public funding will be used to build the Kurri Kurri plant.

The NSW Coalition Government passed a new energy policy in December, designed to encourage renewable energy development. This has already led to some substantial commitments of private investment.

Leaving the renewables transition to the private market, however, will not drive the reductions in carbon emissions we urgently need, or provide any justice for workers and communities currently reliant on fossil fuels.

Despite posing as climate champions, the NSW Government has done everything it can to encourage Santos’ Narrabri project. And despite the recent announcement of private investment in a major 1200MW battery complex, also at Kurri Kurri, driven by their new renewable energy framework, the NSW government is firmly backing Morrison’s Kurri Kurri gas power station.

In December the project was granted “Critical State Significant Infrastructure” status in NSW, removing barriers to development. Then in January a new industrial zone was declared in Kurri Kurri to host the gas power station.

Georgina Woods from Lock the Gate condemned this announcement, arguing, “this gas plant seems geared to inflate gas demand so Santos can open up the northwest of NSW”.

The exploitative, precarious nature of work on private renewable projects was highlighted on 11 February, when 230 electricians and mechanical fitters working on a solar farm owned by private company Sterling & Wilson were sacked by text message.

The struggle to defend Gamilaraay lands and keep the gas in the ground in Narrabri and surrounds is a crucial struggle. We need to build support in our unions, linking this to a fight for large-scale public investment in renewable energy and other low-carbon industries that can drive a just transition.