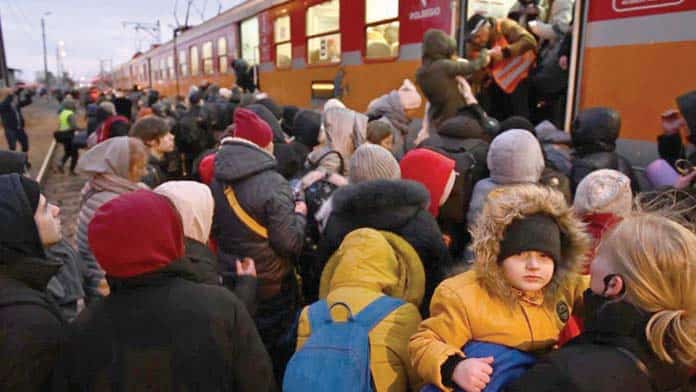 For the second time in nine months the world has been confronted by horrific scenes of refugees fleeing war. The first was Afghanistan in August 2021, the second in Ukraine, this year, with over three million people fleeing across the Ukrainian border following Russia’s invasion.

As Morrison moved to send military aid to Ukraine, he announced that Ukrainian visa applications to enter Australia would go “to the top of the pile…as a matter of priority”.

Since the fall of Kabul on 15 August 2021, more than 150,000 Afghan nationals have applied for refugee and humanitarian visas in Australia. There were widespread calls for at least 20,000 visas to be granted to Afghans separate from (and in addition to) the annual humanitarian intake.

Morrison’s response to the Afghan crisis was a paltry 15,000 visas over four years, all within the annual intake. The Afghan refugees in Australia on temporary protection visas are excluded from permanent residency and denied family reunion.

There are 7000 Afghan refugees in Indonesia, who also cannot go back to Afghanistan, yet the Liberals banned Australia resettling any UNHCR refugees from Indonesia in 2014.

The Tamils who fled civil war and persecution faced their boats being intercepted and turned around by the Australian navy.

The difference between the Ukrainians and others is that they are fleeing Russian bombs, and it suits Australia’s war-mongering narrative to put out a welcome mat.

But the refugees created in Afghanistan and Iraq by bombs dropped by the US or Australia were detained and denied visas.

Instead of Tamil boats being welcomed, successive Australian governments were more interested in maintaining links with the war criminals running Sri Lanka than standing up for human rights.

Since the start of the war, around two million Ukrainian refugees have been welcomed into Poland. But it was a different story in January when Middle Eastern refugees (mostly Iraqis) tried to enter Poland from Belarus. Poland sent the army to build razor wire fences and approved a new law to force the refugees back.

In January this year, Poland started building a fence five and a half metres high and 186 kilometres long to stop refugees entering from Belarus.

In early March there were reports of Black refugees who were Ukrainian residents being blocked at the Polish border, and Indian students in Ukraine being prevented from getting on trains leaving Kiev. The Ukraine refugees are being selectively welcomed; the underlying racism of Fortress Europe remains in place.

In Australia, the Coalition’s hypocrisy was fully on display when the Western Queensland Alliance of local councils announced their willingness to welcome Ukrainian refugees. Agricultural Minister David Littleproud assured the councillors that the federal government also supported the relocation of refugees to Australia, including to his electorate of Maranoa.

“We are obviously going to open our doors up to them,” Littleproud said. Yet the government has spent millions to prevent one Tamil family from returning to Biloela in Central Queensland. The door is not open to them.

The door is not open to the 51 Medevac refugees still in the Park hotel-prison and other detention centres. Nor is the door open to the around 200 still detained in PNG and Nauru. The welcome mat for Ukrainians can’t hide the ugly discrimination that characterises Fortress Australia. The navy still patrols the seas between Australia and Indonesia to intercept asylum boats.