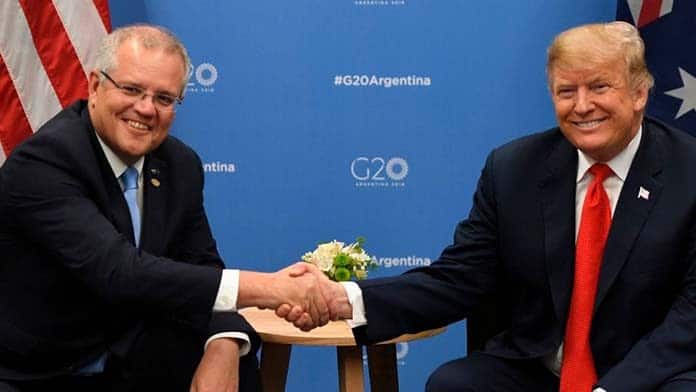 Scott Morrison has joined Donald Trump in fuelling anti-Chinese racism, with escalating attacks on China over the COVID-19 outbreak.

Donald Trump has consistently referred to COVID-19 as the “Chinese virus.” Then Trump lashed out at the World Health Organisation (WHO), threatening to cut its funding because it wasn’t critical enough of China.

Trump’s suggestion that the US would demand billions of dollars in reparations from China is just the latest in his desperate attempts to deflect attention from his own failures and the terrible toll of the virus in the US.  For over a month, Trump downplayed the threat, even against advice from his own health experts, and did nothing to prepare the US health system for the pandemic. Now there are over one million infected Americans and nearly 60,000 dead.

While Morrison did not go along with the attack on the WHO, he was quick to support Peter Dutton’s anti-Chinese rhetoric when he joined calls for China to be “transparent” about the origins and spread of the virus.

Now, Foreign Minister Marise Payne has called for a global inquiry into the outbreak of the coronavirus, targeting its emergence in China. In response, China’s ambassador to Australia, Cheng Jingye, has threatened a boycott of Australian tourism, education and exports.

Meanwhile, racist graffiti and attacks on Chinese have dramatically increased in the last few weeks. The Human Rights Commission reports that a quarter of racial discrimination complaints lodged in the past two months have been related to COVID-19.

One community group, the Asian Australia Alliance, has received 12 reports a day since 2 April, ranging from racial slurs to physical assault.

As the website Being Asian Australian comments, “People are now emboldened to act out their hate due to how Government ministers and tabloid media have given the green light to do so.”

All this comes in the context of growing imperialist rivalry, as the US tries to hold back China from challenging its position of global dominance. Trump has escalated tensions through a trade war designed to boost the US economy.

China and the pandemic

With Trump’s response to the pandemic proving so disastrous, China is attempting to occupy the global leadership position previously filled by powers like the US and EU.

China’s response to the virus is nothing to celebrate. When it emerged in early December, state authorities tried to cover up the outbreak by gagging whistle-blowers like the Wuhan doctor, Li Wenliang, who later died from the disease. China eventually managed to contain the virus through brutal lockdowns and stringent testing. But thousands died in Wuhan as inadequate health services collapsed under the strain.

But with such disasters in Italy, Spain, the UK and the US, the Chinese government has moved to promote its own response as a success story and to assist other countries struggling with the pandemic, in an attempt to prove itself as a good global citizen and project soft power.

It sent ventilators, test kits, masks and health professionals to Italy, as other EU nations were refusing to help. In early April the Chinese government even donated 1000 ventilators to New York.

Australia’s alliance with the United States has driven Australian politicians to join the attacks on China. After a phone call with Trump, Morrison described the two countries as “the best of mates.”

Labor has echoed this, with health spokesperson Chris Bowen supporting the government’s call for an international inquiry targeting China’s handling of the outbreak.

From the start, the Morrison government has responded to COVID-19 with measures that deflect blame onto foreigners.

The government’s first act in response to the pandemic was to introduce a discriminatory travel ban on any non-residents from China.

Since strict lockdowns have been introduced Morrison has doubled down on the nationalist response, framing the fight against the pandemic as a matter of “defending and protecting Australia’s national sovereignty.”

Migrants on temporary work visas have been excluded from both income support and the JobKeeper wage subsidy introduced to cushion the blow of mass unemployment. Morrison told migrants who couldn’t support themselves (or couldn’t rely on family support) to “go home.”

To their credit, the ACTU and the United Workers Union in particular have been campaigning for the rights of migrant workers to income support. Labor has also called for the JobKeeper payment to be expanded to all temporary visa holders.

The emergence of a new pandemic has been anticipated by health experts for years–with numerous close calls including from coronaviruses SARS in 2002 and MERS in 2012 to flu viruses including swine flu in 2009 and avian influenza from 1997.  But research was abandoned when pharmaceutical companies could not turn a profit, and government cuts left populations vulnerable as they ran down public health systems.

COVID-19 has precipitated a health and economic crisis unprecedented in living memory. Our leaders are scapegoating China in order to defend their system. We need to fight this growing racism, and the system that fosters racism and pandemics.

COVID has hit lower-paid workers hardest, according to new research. Solidarity spoke to lead researcher Dr Tom Barnes from the Institute for Humanities and Social Sciences at the Australian Catholic University.