Liberals’ plan for NDIS cuts stalled—now stop them for good 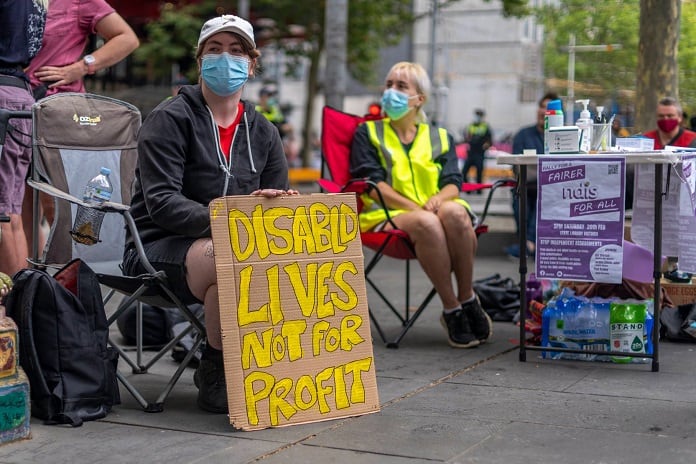 This is a win against the Liberals’ plan for cuts. The government is completely isolated in its push to introduce these degrading assessments. But it has only delayed their introduction until after further consultations and the second round of trials, not scrapped them completely.

IAs would see NDIS applicants’ needs determined by a government contracted assessor, instead of doctors or therapists of their choosing.

It is not clear how the IAs would work. Critics warn that they could be conducted in just three hours and that results will be standardised check box assessments, with little regard for people’s individual circumstances.

Instead of their personalised budget coming out of a consideration of the participant’s goals and aspirations, IAs will see it determined by a crude assessment of their “functional capacity.”

Currently NDIS participants can request a review of decisions made by NDIA staff (from the government department that runs the scheme). They can then appeal to the Administrative Appeals Tribunal (AAT), where the NDIA often loses.

But IA results will not be reviewable. Participants will still have the right to an AAT appeal to challenge NDIA decisions about their budget, but not the data that informs it. This makes winning a successful review harder.

When it was begun in 2013 the NDIS promised to expand funding to meet every reasonable need of people with disabilities. But IAs will be used to cut spending on NDIS participants.

Further draft changes to the NDIS Act leaked in late March revealed that the government considered excluding people with Foetal Alcohol Syndrome Disorder and Acquired Brain Injury from the scheme.

When former NDIS Minister Stuart Robert decried the funding of sexual supports, it was these kinds of supports that he really had in his sights. The government wants to change the NDIS Act so that the Minister decides what can and can’t be funded, rather than the courts.

The government defends IAs as a fairer and more accurate way to determine NDIS participants’ support needs. These changes proposed in the draft Act show that fairness couldn’t be further from their minds.

The stakes are high. Disability advocates have warned of devastating consequences if IAs result in budget cuts or NDIS participants being “exited” from the scheme.

In its submission to the parliamentary Joint Standing Committee, VALID, an advocacy organisation for people with an intellectual disability, explained that, “this will mean people returning to prison, people evicted into hospitals, more children in out-of-home care, homelessness and even preventable death.”

Opponents of independent assessments need to press the advantage and take on the broader cost-cutting agenda. NDIS plans are already being slashed. The NDIA recently formed a “Sustainability Action Taskforce” to cut spending. This is separate to all the other government reforms.

The sector is losing experienced workers as online platforms like Hireup and Mable, which use entirely insecure workforces, “disrupt” the NDIS market by undercutting established providers.

Personalised budgets were sold to disabled people as a means of empowering them by promoting “choice and control.”

In reality personalised budgets are a tool to limit NDIS participants’ spending. They impose a cap on the goods and services participants can access. This is becoming clearer under the proposed reforms, which include the periodic release of funds instead of an annual budget for use at the NDIS participant’s discretion.

As an alternative to independent assessments the Fairer NDIS for All campaign is demanding free medical and allied health services for NDIS applicants. This would reduce inequalities in obtaining the evidence needed to access the scheme.

But the ultimate goal needs to be a public disability service without strict eligibility criteria that exclude people who should be receiving support.

The campaign to stop IAs can be the start of a movement to win this.

Workers at NDIS provider walk out for pay and dignity

Support workers at NDIS provider Bedford in South Australia struck in late May for two days, for wage equity and better treatment by management. In a separate dispute, Bedford workers with disabilities are also gearing up to win wage justice under a new agreement.

Unfortunately for the NDIS and people it hoped to empower, the Coalition's priority is not delivering social services but delivering a balanced budget.

Plans for a National Disability Insurance Scheme (NDIS) are a centrepiece of the Gillard government’s efforts to re-badge Labor as committed to public services....