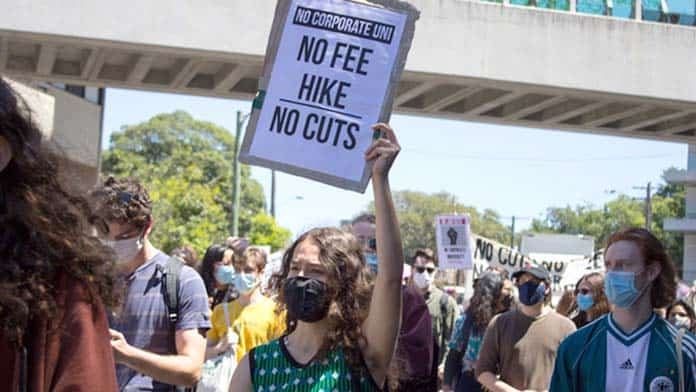 It’s widely known that Australian higher education funding has been hit hard by COVID-19. Less well understood is that under the cover of the crisis the government has been decisively restructuring university funding.

The “Job-ready Graduates Package” that passed in October 2020 not only cut government funding but introduced new mechanisms to force universities into increased levels of dependence on corporate funding.

The result was confirmed in last week’s federal budget, with overall university funding down 5.4 per cent next year in real terms, and another 3.6 per cent the two years after.

The border closures that governments enacted in the face of COVID had deep implications for the higher education systems of countries that rely on international student fees such as Australia, the UK, the US and Canada.

This was especially the case in Australia, which had the most immediate and total border closures, and the highest proportion of international students globally. Twenty per cent of students at Australian universities come from overseas, and international student fees have become essential after 30 years of per-student government funding cuts.

However, while 68 per cent of OECD countries increased funding for universities in the face of this (and also in recognition of the costs of a rapid move to online learning) the Australian government consciously refused to provide any financial support.

Even while the government constructed an historic stimulus program representing 16 per cent of GDP, it excluded the university sector from relief, amending its JobKeeper wage subsidy three times to ensure that public universities were ineligible.

Then in October 2020 it introduced the “Job-ready Graduates Package” which included a 15 per cent cut in government funding for universities. Before COVID, higher education was Australia’s third biggest export market. This is not a sector that any government can simply overlook. Rather there has been a clear decision to allow the system to go into crisis to force a structural adjustment.

Vice-chancellors, both of universities that suffered deep funding cuts and those that remained in surplus, have responded with historic job cuts, with one in five university staff losing their jobs since the start of 2020.

Initially these were layoffs of casual staff—turning off the labour tap just as casualisation is designed to do. But in the last year the cuts have been to permanent staff.

The Job-ready Graduates Bill affirms the Liberals’ belief that, for working class students at least, university should be a conveyor belt into the capitalist economy and nothing more. It rests on the false idea that students are wasting tax-payer funds by studying humanities and the arts where there are no jobs.

In fact arts graduates have a higher rate of postgraduate employment than science graduates studying in “priority areas”.

Even business groups opposed the de-prioritisation of arts, arguing arts degrees promote the flexibility and communications skills industry wants in an increasingly precarious and automated economy.

But as we saw with the Ramsay Centre for Western Civilisation debacle, culture war vendettas against university humanities departments remain close to the hearts of Liberal politicians.

Job-ready Graduates introduces price signals through fee increases and decreases to drive students into the government’s priority areas of study and out of others.

This will leave students with considerable debts. Currently the average student debt is $20,000 but arts students will now pay $43,000 and the popular combined arts/law degree will cost $75,000.

While it might be cheaper for students to study nursing or teaching, it will be more expensive for universities to run these degrees. This may lead to fewer places in exactly the areas the government claims to want more graduates.

As nurses and teachers’ unions have said, if the government really wanted to ensure more graduate nurses and teachers, they should grant union demands for pay rises and improved conditions. This would do far more to attract workers into these crucial areas and retain those already there.

The virtual de-funding of humanities is very acute in the Job-ready package. Previously fees roughly mirrored projected future earnings, with law students paying more for their degrees than arts students. Now students in humanities face a much larger student debt without any increase in their likely life-time earnings.

The government is attempting to steer working class students into professional degrees and away from some of the social justice content and critical thinking that social science and humanities departments still allow.

The children of the rich, of course, will continue to study humanities as they have always done, and as most of the parliamentarians who voted up this Bill themselves did.

But in families where no one has been to university before the increased costs are very likely to act as a deterrent. The deferral of fees under HECS-HELP may mask the real costs of study in the short term, but at the cost of long-term debts.

For women, who earn 22.8 per cent less over their lifetimes and make up two thirds of students in arts and social sciences, this debt burden will dominate their working lives.

For decades now researchers have had to prove their connections to industry in order to have their work funded. But Scott Morrison wants to accelerate this.

The Liberals have waged a three-pronged offensive. First, they cut $1.4 billion from the Australian Research Council. Then they dismantled the existing research funding streams inside universities.

The Job-ready package prevents cross-subsidisation within universities so that earnings from student fees can no longer be used to fund research. Previously 30 per cent of research was funded through international student fees, and a further 10 per cent through domestic student fees.

In February this year they announced an entirely new $2 billion University Research Commercialisation Action Plan. This will fund research only in defence industries and government-priority manufacturing areas.

Announcing the plan, Morrison said: “We need to shift the focus from citations to commercial success … we need to develop a new breed of research entrepreneurs here in Australia so they can create the new products and new companies and most importantly, the new jobs.”

The Liberal government has used the COVID crisis to force universities to even more closely serve the needs of Australian corporations and the war machine. Students and staff must demand all these changes are reversed, and rekindle the fight for fully publicly funded, quality, accessible higher education for all.

The NTEU enterprise agreement campaigns kicking off around the country are a chance to start this fightback and raise the broad vision of education for human need.

Members of the NTEU at the University of Queensland kicked off their “Striketember” with a short strike and protest.

Staff at the University of Sydney have taken their fourth day of strike action since May this year against an aggressive and hostile university management.

Sydney University strikes show how to fight back

Three days of strike action at Sydney University in May have turned the political mood on the campus around.