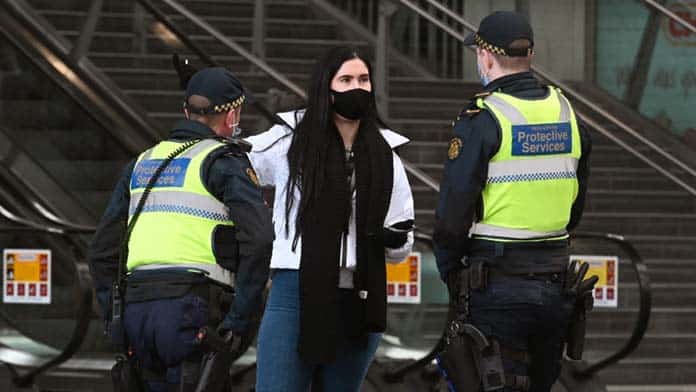 The large right-wing “freedom rallies” across the country last weekend, particularly in Melbourne, are a worrying development. Many on the left are rightly concerned that the far right will capitalise and grow out of the protests.

But counter-demonstrations that simply label the protesters as fascists or part of the far right are counter-productive. This misdiagnoses what the rallies represent and what is driving them. The protests of tens of thousands are not gatherings of hardened neo-Nazis or supporters of the far right. Nor are they the kind of explicitly racist right-wing protests we have seen in the past, such as the Reclaim Australia rallies in 2015 or the One Nation rallies of the late 1990s.

Small established groupings of fascists have joined the protests, and some individual neo-Nazis have also infiltrated the organising circles. They are trying to recruit people to harder right-wing politics, including explicitly racist ideas. Anti-vaxxers and right-wingers like Craig Kelly and Clive Palmer’s United Australia Party are also trying to benefit from the marches. But many of the tens of thousands marching are simply people who are angry at the impact of lockdowns or workplace vaccine mandates.

Melbourne has seen the largest protests by far—and is the city which has experienced far more time in lockdown than elsewhere in Australia, has the widest workplace vaccine mandate and a state government that wants a new pandemic powers bill. This is an indication about what is driving the rallies.

To stop the growth of the far right, those who are driven by real grievances around the policing and financial toll of lockdowns, or job losses due to vaccine mandates, have to be drawn away from the anti-vaxxers and the right. But this is only possible if the left addresses the concerns that are driving them onto the streets.

Telling them that they are marching alongside the far right won’t achieve much if anti-vaxxers and the right are the only ones doing anything to take up these issues.

The COVID lockdowns have created serious financial strain. Government support for workers who were stood down or sacked was far from adequate, with many still losing thousands of dollars. Police were granted draconian powers, enforcing arbitrary curfews without any health justification, and imposing fines of up to $1800 in Melbourne for trivial breaches of lockdown measures.

Last year, residents of nine public housing towers in Melbourne were put into hard lockdown without warning, with police preventing residents from leaving their rooms.

In Sydney, the state government admitted that a curfew was imposed only because of a police request, while newly released documents show then NSW Premier Gladys Berejiklian ignored advice from Chief Health Officer Kerry Chant against imposing discriminatory hard lockdown measures on western Sydney.

In Melbourne, anger about lockdowns and state powers has found a focus in opposition to Daniel Andrews’ new pandemic powers bill.

The bill has drawn widespread criticism, including from Liberty Victoria, the Victorian Bar Association and a number of prominent QCs.

Not only does it authorise the continuation of the police powers and lockdown measures of the past two years, it entrenches a “blank cheque to rule by decree” for the government once a pandemic is declared, as the QCs’ open letter puts it.

Even after last week’s amendments, the new aggravated offence of failing to comply with pandemic measures allows individual fines of up to $45,000. Yet most of the left has simply gone along with it. This is a continuation of the way many on the left have cheered on the abuse of state powers through enthusiastic support for lockdown measures.

If the left had called its own protests against Andrews’ pandemic powers bill, opposition to an authoritarian response could have been connected to demands for health measures such as increased spending on hospitals and an end to under-staffing, paid pandemic leave, and improved workplace ventilation and safety measures. Instead it has been left to the right to make the running.

State governments across the country have also imposed vaccine mandates on workers in a heavy-handed effort to drive up rates of vaccination. Many unions have spoken out against this, pointing out that threatening workers with the sack can harden their opposition to getting a jab.

And punitive measures against people who aren’t vaccinated serve only to scapegoat them for government failures to organise a proper vaccine rollout and information campaign.

Instead of ensuring access to vaccination is as wide as possible, governments have declared vaccination an “individual responsibility”. The result is that vaccination levels are generally lower among disadvantaged groups, as Mitchell Institute researchers have shown, particularly outside Sydney and Melbourne.

Lack of access has produced appallingly low rates of vaccination in some regional areas, including in Indigenous communities. In north Queensland communities including Rockhampton, the Tablelands, the Central Highlands, Burdekin and Charters Towers, less than 35 per cent of Indigenous people are fully vaccinated, less than half the figure for the whole state.

Nor are punitive measures against the unvaccinated necessary to protect the wider community. While unvaccinated people do transmit the virus more easily, those who are fully vaccinated can also catch and pass on the virus.

The most important benefit of the vaccines is that they provide strong protection against hospitalisation and serious illness. This means the greatest threat the unvaccinated pose is to themselves.

Australia is heading for one of the world’s highest rates of vaccination, with close to 95 per cent of those eligible dosed with at least one shot in NSW and Victoria. The tiny number of unvaccinated people pose very little risk to their workplaces or the public.

Yet many on the left have fallen in behind the vaccine mandates and sackings too, writing off construction workers who joined the protest outside the CFMEU office in Melbourne as fascists or anti-vaxxers. This has only helped to drive them into the arms of the far right.

The left-wing counter-demonstrations last weekend were effectively rallies in support of Daniel Andrews, the vaccine mandates and the pandemic powers bill. It is tragic to see the left collapse into such abject support for the Andrews Labor government, cheersquadding every increase in police powers instead of defending jobs, public health and the right to protest.

This has given anti-vaxxers and the right a huge political opening to capitalise on the discontent.

To undermine the far right, the left needs to oppose Daniel Andrews’ pandemic powers bill, stand against the vaccine mandates, and begin a fight for the kind of government funding, support and health measures that are necessary to deal with the ongoing pandemic.