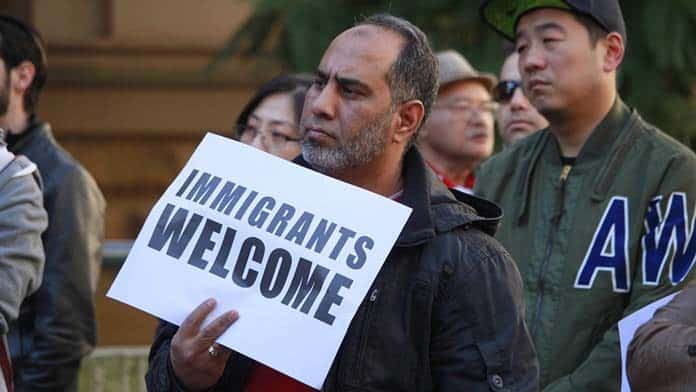 Labor’s Kristina Keneally has revived the racist myth that immigration costs workers’ jobs and wages, with an opinion piece on Sunday that has sparked a furore.

Appallingly, even Labor Left MPs like Ged Kearney and the ACTU’s Sally McManus have gone along with it.

Keneally’s comments are a continuation of her misguided and opportunistic efforts to attack the Coalition from the right over immigration, following her claim that Peter Dutton had “lost control of our borders” through allowing asylum seekers to arrive by plane.

They threaten to reignite the campaign against temporary migrants that we saw from the Labor Party under then leaders Bill Shorten and Julia Gillard.

In a situation of growing unemployment, this is a dangerous development. It will feed a racist response that blames migrants for the cuts to jobs and wages. It is doubly dangerous given the escalating attacks on China coming from Trump and Morrison over the coronavirus outbreak. These are already leading to an increase in racist attacks here.

In the past some unions have also campaigned against temporary migration in defence of “Aussie jobs”. This is a disaster for the union movement. Racism divides workers and prevents the united struggle we need to defend jobs and wages.

It is bosses’ efforts to maintain profits that are responsible for cuts to jobs and low wages, not migrants. Qantas stood down 20,000 workers because it could no longer make profits due to the coronavirus. Casual workers are being sacked at universities across the country due to drastic revenue losses and lack of government funding—in this case due to the halt to temporary migration in the form of international students, not because of too much of it.

The idea the immigration causes unemployment is a total myth. All the evidence is that, because it generates greater demand for goods and services, migration creates jobs. The Australian economy has been built on the back of high levels of migration over many decades.

Keneally has blamed temporary migrant workers in particular for denying “Australians… a first go at jobs”, claiming there are 2.1 million in Australia. But this includes those on tourist visas, international students and New Zealand citizens. Many of them have work rights. But there are only 139,000 people here on temporary skilled work visas, around 1 per cent of the workforce.

Migrants on temporary skilled work visas are more vulnerable to exploitation. Their visa conditions mean they are reliant on their employer for the right to stay in the country. They must leave the country if they lose their job and cannot find another one within three months.

The solution to this is to demand full permanent migration rights for everyone that comes here—and to organise them into the unions.

The United Workers Union in particular has run excellent campaigns to unionise migrant farmworkers, who often face appalling exploitation by their bosses.

The whole union movement has been united in calling for migrant workers on temporary visas to have access to the JobKeeper wage subsidy. At the moment there are thousands of temporary migrant workers who have lost their jobs and are either facing destitution or being forced to leave the country due to lack of any income support.

We need to build on this approach and reject the racist scapegoating blaming migrants for job losses.

Unions need to welcome new migrants if we are to build an effective fighting movement. Around 30 per cent of the Australian population was born overseas. On current trends, over 40 per cent of temporary migrants will end up staying permanently. Campaigning against migration risks alienating huge numbers from the movement.

Keneally’s call for a lower level of migration after the end of the coronavirus lockdown is nothing but racist scapegoating. It must be rejected.