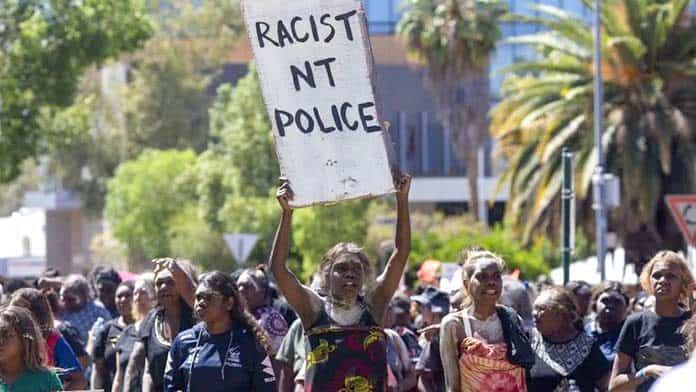 This year began with another shocking Aboriginal death in custody, the product of an injustice system set up to criminalise, jail and kill. Veronica Nelson Walker, a Yorta Yorta woman, was found dead in her cell on 2 January, after she was refused bail and sent to a maximum security prison simply for shoplifting.

Zachary Rolfe, the police officer who shot 19-year-old Walpiri man Kumanjayi Walker in November last year, received very different treatment from the courts, despite being charged with murder. He was bailed immediately and suspended on full pay.

Rolfe was only charged as a result of explosive protests emanating from the crime scene of Yuendumu, to remote communities and cities across the country. On the night police announced Rolfe would be charged, many hundreds of Warlpiri people were on a convoy into a mass protest in Alice Springs and their #blacklivesmatter protest videos were receiving international attention.

Further rallies in Alice Springs in December helped to stop Rolfe’s request to move the trial to Darwin, which would have made it impossible for Walker’s family and community to attend.

A decade of intensifying “war on crime” in the NT has seen hundreds of unsentenced Aboriginal children and adults go to prison on remand, often for petty crimes. But Rolfe can go home to his wealthy parents in Canberra.

Across the country, the system protects its attack dogs. A week after Rolfe was released on bail, an inquest into the NSW death in custody of Dhungutti man David Dungay ruled that five corrective services officers who held David face down while he yelled “I can’t breathe” were not motivated by malicious intent but “misunderstanding”.

Blind to the irony of their comments, the Police Association defended Rolfe’s release on bail, stating, “he, like all, has the presumption of innocence in his favour.” Yet, particularly since the NT Intervention, Federal and territory governments have handed police extraordinary powers to presume the guilt of all Aboriginal people across the Territory. They are licensed to harass and incarcerate en masse. For Rolfe, it was a short step to kill.

The 2007 NT Intervention intensified a massive influx of Commonwealth resources for policing that began the previous year.

Under the Intervention, the Australian Crime Commission was granted extraordinary “star chamber” powers to refuse suspects and witnesses the right to silence. Regular police gained powers to search Aboriginal homes, vehicles and bodies without a warrant and to apprehend if they reasonably believed a person to be drunk.

The NT government keeps doubling down on criminalisation. In 2013 Mandatory Sentencing laws returned, and in 2014 “paperless” arrest laws allowed police to grab people off the street with no record if suspected intoxicated or “about to commit a crime”.

Despite a Royal Commission into the torture of youth in Don Dale and other juvenile prisons, guards have been granted greater powers to abuse inmates and now 100 per cent of the children in NT prisons are Indigenous. Kumanjayi Walker suffered in these prisons for many of his teenage years.

Just hours after Rolfe shot Walker dead, the Yuendumu community saw a plane flying in and thought it was coming to airlift Walker to the hospital. But the plane was full of a special paramilitary police force brandishing AR-15 assault rifles. These cops occupied the community for three weeks.

This was a blatant attempt to intimidate and suppress powerful community protests for justice.

Despite shocking poverty across the NT, money continues to gush from government taps for the war on Aboriginal people that has not stopped since invasion. The protests for Walker around the country were signs of a fierce resistance to the endemic police violence and systemic racism.

The murder charge on Rolfe is a real breakthrough. But a number of killer cops have had similar charges dropped before, like Constable Whittington, who shot Robert Jongmin at Wadeye in 2004 and then never faced trial. Continuing resistance holds the key to justice.