How unions fought back the ABCC last time 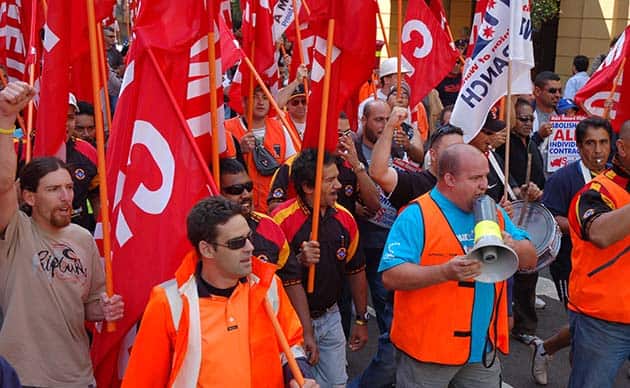 Millionaire Malcolm wants to fight an election on the issue of “union lawlessness” in construction and to dredge up a Howard-era relic, the Australian Building and Construction Commission (ABCC).

But that government-funded body has only ever set out to criminalise basic union organising on building sites.

It deals only with breaches of industrial laws, not corruption or criminal conduct. Even the head of the Master Builders Association, Wilhelm Harnisch, admitted as much, telling the ABC’s John Faine, “those people who are saying this is about dealing with criminality and corruption are missing the point about the ABCC bills.”

They want to restrict everything from signing members up, the right of entry to sites, safety, to making sure wages and entitlements are paid by employers. It’s that basic.

Construction is a dangerous injury. Cutting corners can cost lives. Weakening the unions erodes safety on building sites. Under the Howard government, the number of deaths in construction almost doubled from 19 in 2004, when the ABCC was set up, to 37 in 2007-8, by the time Howard lost office.

The Liberals have been targeting the building unions since the early 1990s. This is because the Electricians, Plumbers and Construction divisions of the AMWU and CFMEU are among the strongest and most effective unions in the country.

For the building company bosses, strong unions are an impediment to increasing their profits. The Liberal Party is right behind them.

When the Victorian Liberals tried to introduce a state-based version of the ABCC, reporter John Ferguson, in The Australian, admitted the aim was to, “police workers on state-run major projects in a bid to drive down costs.”

NSW Premier Nick Greiner first had the idea of setting up a Royal Commission into building unions in 1990. After two years of mud-slinging not one charge was laid. But John Fahey, who followed Greiner as Premier, now had an excuse to form a NSW Building Industry Taskforce to harass building unions.

Greiner went on to become the director of one of largest building companies in Australia Valemus (Bilfinger Berger), owners of AbiGroup, Baulderstone and Conneq.

The same template of using a Royal Commission to justify a special body for the industry was used by Tony Abbott, Howard’s Workplace Relations Minister in 2001.

The Liberals funded the $60 million Cole Royal Commission (2001-2003) which failed to successfully to charge one person, let alone convict anyone. Even The Australian, no friend of the unions, called the Commission a “highly political exercise”.

Howard had to wait until 2004 when he finally had the numbers in the Senate to set up the ABCC.

The ABCC made building workers into second-class citizens. They were obliged to appear before the body and compelled to answer questions. The right to silence was abolished. What went on was secret: you couldn’t tell even workmates or family what the ABCC asked about. Refusing to comply was punishable with six months’ jail.

Over 200 rank and file workers and officials were called up for questioning.

The ABCC legislation was introduced alongside WorkChoices, the focus of the union Your Rights at Work campaign. It was only after Labor’s election in 2007, when Kevin Rudd refused to abolish the ABCC and dithered in what to do with it, that the campaign against the ABCC really began.

It took two individual unionists who were willing to defy the ABCC, by refusing to answer questions and facing jail time, to trigger significant union action.

The first was Noel Washington, a Victorian branch official, in 2008. A national building workers strike on the day he faced court ensured his charges were dropped.

The Commonwealth Director of Public Prosecutions simply withdrew the charges, refusing to admit why.

At a mass meeting in Melbourne that followed, construction unions called on all workers and union officials to refuse to co-operate with the ABCC, and pledged to defend anyone prepared to take the same stand.

Then in 2009 a rank-and-file South Australian rigger, Ark Tribe, was charged over refusing to attend an ABCC interrogation. Further industrial action by building unions ensured the courts understood that jailing him would mean millions in lost profits, through escalating strike action.

To their eternal shame, Labor never fully abolished the ABCC. They kept it alive until 2012 and then only stripped it of some of its more draconian powers. It was rolled into Fair Work Australia, as a Building Inspectorate.

The lesson from last time is that defiance, backed by mass strike action, can force the government to back off.