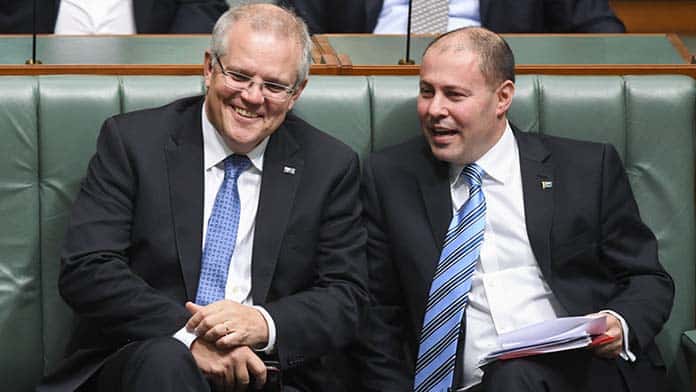 There are now close to one million people unemployed. Their JobSeeker payments face a cut that will push them well below the poverty line, living on just $40 a day from the end of December. Yet high income earners have been handed big tax cuts.

Despite the crisis in aged care exposed in Victoria’s COVID-19 second wave, resulting in over 660 deaths, there is nothing to boost staff or training in aged care centres. Instead of making the massive investment in renewable energy and climate transition that we need, Morrison is handing money to prop up the Vales Point coal power station.

The largest tax cuts this year will go to those earning over $120,000. Treasurer Josh Frydenberg tried to claim that lower income earners get more back “as a proportion of tax payable”. But the size of the tax cuts for those earning $40,000 are just $580 a year extra compared to $2430 for anyone earning over $120,000. And the tax cuts for the rich are permanent, while those for low income earners expire after one year.

Not only is this hopelessly unfair, it is not even an effective way to boost economic demand, as the rich are much more likely to add the extra money to their savings rather than spend it.

The budget contains handout after handout for business. It is another exercise in neo-liberal trickle down economics that will punish workers. It is based on unrealistic expectations of an economic recovery. The estimate of economic growth of 4.75 per cent  for the next financial year would mean the biggest economic growth this century and be even better than growth figures during the mining boom. Not likely.

The biggest new program is $27 billion for investment incentives to allow businesses to buy new machinery and equipment. Instead of the government creating quality, well-paid jobs itself there will be a subsidy for businesses that employ new staff under the age of 35.

The government’s push for more “flexible” work laws means many of them will be casualised and low paid. It is preparing new attacks on workplace rights to bring to parliament before the end of the year.

This is all designed to boost business profits at the expense of workers. And both measures will be open to almost every business in the country, regardless of whether they have suffered any losses due to the pandemic.

Morrison wants to ensure bosses reap the benefits from any economic recovery. After years of record low wage growth, wages will actually go backwards in real terms over the next two years.

Faced with the chance to borrow money at record low interest rates, the Liberals’ are simply handing money to employers. The increase in spending on infrastructure projects is modest, at an average of around $2.5 billion a year, mainly on building roads.

They have refused to fund the kind of investment that could have delivered a climate recovery, through projects like high speed rail between cities, retrofitting buildings, and renewable energy. Beyond Zero Emissions has produced detailed plans showing how this could create up to one million jobs. But this has been ignored.

The budget delivered nothing to fund social housing, despite widespread appeals from charities and economists alike. The Everybody’s Home campaign estimates that building 30,000 new social housing units could also create 18,000 jobs. There is already a major shortfall of over 430,000 in public housing and affordable homes. This is set to get worse with a higher level of unemployment.

Hidden in the budget papers there are also some nasty cuts including $41.3 million from homelessness services from next year, a cut of 5000 from the annual refugee intake, and ongoing cuts to the ABC.

Scott Morrison and Josh Frydenberg have failed to produce a budget that either delivers on jobs, supports workers living standards or keeps the unemployed out of poverty. As jobs keep disappearing with the end of the JobKeeper wage subsidy, unions and the left are going to have to fight for the measures we need to protect workers from the worst recession since the 1930s.

Editorial: Turn rage at Morrison’s failure on rape into fightback against...

The Morrison government is being engulfed by the outrage at its failure to respond to the accusations of rape and sexual assault in Parliament House.

Instead of extending support to workers, Morrison wants to give bosses more “flexibility” through new industrial relations laws to allow them to cut workers’ pay and conditions.