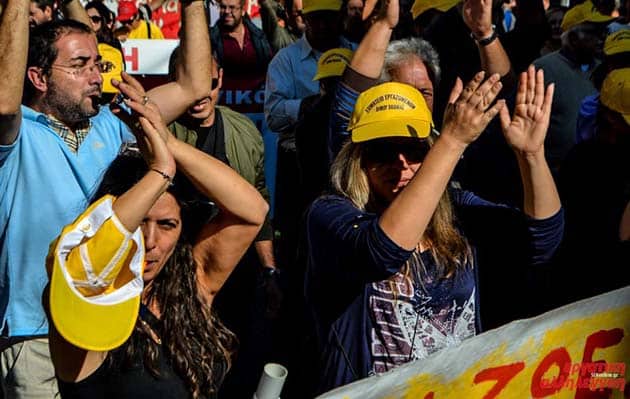 The fight against Syriza’s austerity measures in Greece has begun, with workers staging two general strikes in the space of three weeks.

Workers shut down all air travel, boats and trains in the first general strike on 12 November. “It was the biggest strike demonstration since the huge strikes that brought down the government of technocrats in 2012”, according to Greek socialist Panos Garganas. Hospitals and ambulances operated on skeleton staff and schools and universities were out. Tour guides and operators at the Acropolis and the Archaeological Museum struck. Journalists refused to cover anything apart from the strike and many newspapers did not get produced. Both the main public and private sector union federations backed the strike.

Massive feeder marches, one organised by the Greek Communist Party and one from the Archaeological Museum with a large presence from the anti-capitalist front Antarsya joined a huge crowd in Syntagma Square.

Even though the Metro and buses were off, the rallies in Athens and in Thessaloniki were still well attended. Bank workers, who hadn’t been on the streets since 2011, had a strong contingent. This is strategically important. As we saw in July when the Eurozone leadership froze Greece’s financial system in an attempt to force the government to its knees, the issue of releasing money for pensioners but stopping the rich from moving their money offshore is central to the success of the struggle. Radicalising bank workers and encouraging workers’ control of the banking system is therefore a key task.

On the eve of the strike the Syriza government labour ministry encouraged Greeks to join the strike. This was a contradictory and last minute gesture. Syriza ministers argued that the strike would strengthen the hand of the government in negotiations with Greece’s creditors. But the government has already capitulated to the key cuts demanded by the Troika.

A second 24-hour general strike was set to take place as this article was written.

Legislation has already been passed that increases the pension age from 60 to 67. New pension laws will go further, cutting the rate of pay by 40-70 per cent. The main public sector union described the package as “the final blow to social insurance”, asserting that “Society, which has suffered brutally from the bailout, will overturn the austerity measures”. Pensioners protested in large numbers themselves in late November.

Individual groups of workers are also taking the fight to the new austerity measures. Port workers have staged a succession of one and two-day strikes against privatisation. Council workers are fighting to save the jobs of many workers put on five-month temporary contracts. If the jobs are cut, understaffing will be so severe that many services will not function.

And Hospital workers staged a two-day strike in early December against wage cuts and chronic shortages of staff. “The hospitals are on the brink of collapse”, explained nurse Maria Charcharidou. “We need to demand recruitment and increased funding so that everyone has access to a fair and public health system.”

When Greeks returned Tsipras’s “radical left” Syriza party to power with an increased majority in September, many commentators argued the population had accepted the inevitability of austerity. Having caved into Eurozone creditors and agreed to a new austerity memorandum, Tsipras hoped his re-election would be a mandate for a massive cut in the pension, 8 billion Euros worth of privatisation and other measures designed to slash government expenditure. But only two months later the unions have again said OXI with a new wave of general strikes.

Until now Syriza has managed to hold onto echoes of its old radicalism to maintain its electoral dominance. It was elected in January on a promise to tear up the austerity Memorandum and break with the cuts enforced by the mainstream parties. But the impact of implementing austerity is being increasingly felt. Ministers continue to resign from the party, and the membership is a shattered shell of its former self.

Rather than kill off resistance, the re-election of Syriza, after their historic sell-out of the OXI referendum in July, has shown workers that protection of their living standards and welfare state cannot be left to elections. Instead they are beginning to take measures into their own hands and wield the weapon of the strike.

This is hugely significant. Workers’ resistance in Greece can help pull the anti-austerity movement in Europe forward. While there are calls for a “real” left government from Syriza breakaway Popular Unity, the electoral chances of this are remote. This creates fertile ground for workers to begin to see that their own power, through strikes, occupations and control of the workplaces, is the way out of the crisis.

An enormous general strike in February saw tens of thousands of people march in Greek cities against an attack on pensions—now coming from the Syriza government.

Understanding the rise and fall of Syriza

Through all the twists and turns of the last six months, Kevin Ovenden has been a key source of English-language updates on the Syriza government and events taking place in Greece. Now he has produced one of the first detailed accounts of the events that made the radical left’s rise to government possible, and Syriza’s rapid capitulation to EU-imposed austerity.