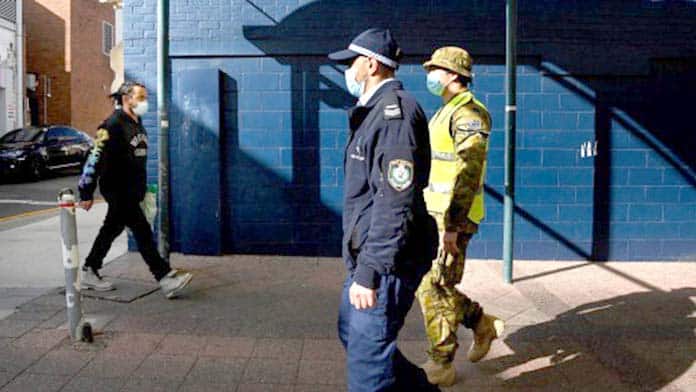 The Delta outbreak has now infected thousands in Sydney, leaking into rural NSW, Victoria, the Northern Territory and New Zealand.

The whole of NSW is now locked down—in the case of Sydney, at least until the end of September. The lockdown in the NT has lifted but others remain in Melbourne, across Victoria and the ACT. Queensland is putting troops on the border to prevent any except vaccinated, essential workers from crossing.

As the NSW government fails to bring down case numbers it has turned to blaming ordinary people in western Sydney. Health Minister Brad Hazzard has declared repeatedly that “what is happening is that people are not actually complying” with restrictions.

NSW Premier Gladys Berejiklian’s solution is to escalate the police crackdown. She has ratcheted up COVID fines to $3000 for breaching stay-at-home rules and $5000 for breaching isolation orders, and sent in another 500 troops. Now she has introduced a curfew.

The massive police operation and troops on the street in western and south-western Sydney has left many suburbs feeling under siege. This heavy-handedness is a disaster, making many even more suspicious of government health measures.

Targeting western Sydney but not the richer eastern areas of the city has exposed Berejiklian’s double standards.

To make matters worse, there is still inadequate financial support for people under lockdown. There is no vaccination leave that would allow casual workers to get vaccinated without losing pay.

Finally, after seven weeks, the government has introduced a test and isolate payment so workers don’t have to choose between getting a test or losing pay. At $320 it is less than Victoria’s $450 but it shows that pressure from unions and campaigners can force action.

However, unlike in 2020, Scott Morrison has refused to raise JobSeeker, forcing people to go through lockdown in poverty. While the $750 disaster payment for those who’ve lost 20 hours of work matches JobKeeper, this time around many workers have already spent savings or taken out superannuation. Meanwhile, even more workers are being laid off.

It is Sydney’s most disadvantaged suburbs that are worst affected. Instead of punitive policing, health workers and community workers could assist households struggling to deal with the restrictions and ensure that testing and vaccination is widely available.

More needs to be done to ensure that workplaces are safe. Almost half the 3000 workers surveyed by Unions NSW said their workplace had put them at risk of infection, with one in five reporting masks were not enforced in indoor settings.

Unions and workers need to organise to fight for workplace safety. There should be a massive rollout of rapid antigen testing at workplaces so workers can be checked every morning.

And there should be immediate action to close down, clean and quarantine workers (on full pay) if cases are uncovered.

Cases in Sydney are still rising despite almost two months of lockdown. But a harder lockdown is not the way to go.

The NSW local government areas (LGAs) where COVID cases are concentrated have restrictions very similar to those on workplaces in Melbourne’s second wave. Non-essential retail has been closed since mid-July, as has much of manufacturing, schools and other services.

Construction is limited to 25 per cent of workers on site in Melbourne but has never been closed entirely, as it was for three and a half weeks in the most restricted LGAs in Sydney.

It is doubtful that NSW will get COVID cases back to zero. Vaccination is the key to getting out of the lockdown—in NSW and everywhere else.

So far the vaccine rollout has been a farce—with Scott Morrison squarely to blame. By the middle of August, about half of all aged care workers had still not received even one dose, including 40 per cent in NSW. They were supposedly among the highest priority.

It is a crime that there are aged care workers and Aboriginal communities who are still not vaccinated. In Victoria, where the Aboriginal health service was in the driver’s seat with Pfizer on tap for anyone who walked in, Indigenous people have higher rates of vaccination than the general population.

Australia’s vaccination rate is still behind all but three of the 38 OECD developed nations.

More people are lining up for Astra-Zeneca instead of waiting for Pfizer. More Pfizer and Moderna shots will be available in September. But more will need to be done to get vaccination rates to 80 or 90 per cent. Getting a jab must be as easy as possible—more workplace, suburban and drive-in clinics are needed.

With Morrison’s failures becoming more obvious, Labor leads the Coalition 53-47, according to Newspoll. Now is the time for union leaders to take a stronger stand, building the fight to make sure workers do not pay the price as recession looms once again.

Fighting for vaccinations and safety at work, for increased JobSeeker and financial support in lockdowns is the key to beating Morrison and COVID.