Fighting racism and Islamophobia: How can we stop Pauline Hanson? 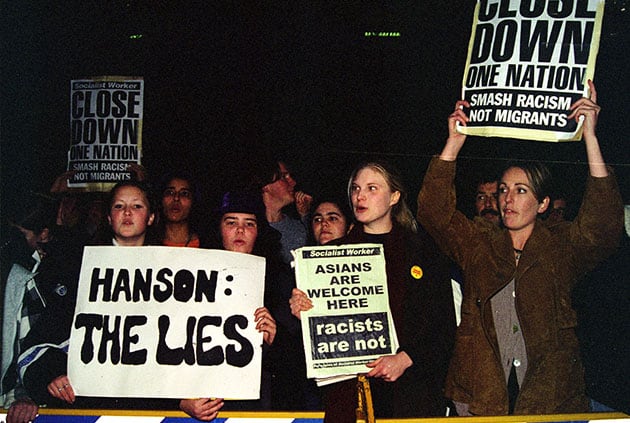 Mass protests and campaigning to debunk and expose her racism is key to driving back Pauline Hanson, and the mainstream Islamophobia that feeds her, argues James Supple.

Pauline Hanson’s election to the Senate, and her renewed invitations to spread racist bigotry on prime time TV, have shocked and horrified many people. Her One Nation party will have four seats in the Senate, and a key role in negotiating legislation. So how can we stop her?

Some people argue that demonstrations and expressions of anger against Hanson will play into her hands. Journalist Margo Kingston, who followed Hanson’s 1998 election campaign, says the problem is that “neither side understands the other” and therefore the solution is to respectfully listen to Hanson’s supporters, in order to bridge the divide.

But this approach means ceding political ground to Hanson and refusing to challenge her.

Waleed Aly has tried to put this into practice. When Sonia Kruger called for a ban on Muslim immigration his response, in a segment on The Project, was to accept fears about terrorism as legitimate.

But such fears have been inflated by scaremongering from Tony Abbott, Malcolm Turnbull and the right-wing media, in an effort to justify draconian police powers and suspicion of the Muslim community.

So concerned is Waleed Aly to “understand” Hanson’s supporters that he is letting them set the terms of the debate. Instead of challenging their ideas, Aly failed to make it clear why casting suspicion on and punishing the Muslim community will only inflame the problem. There would be no risk of terrorism here without the wars the West has unleashed on the Middle East, especially over the last 15 years, and the anti-Muslim racism accompanying them at home.

Pauline Hanson and One Nation’s ideas do have to be labelled as racist and fiercely contested. Bigotry should not be an accepted part of political debate.

Openly racist speech results in a rise in physical racist violence. Within weeks of Hanson’s maiden speech in 1996, there were a series of racist attacks on Asians. Thomas Teng, who was bashed along with his father Zhong Xin Teng in Canberra, told the Canberra Times, “They attacked us because we are Asians. After 30 years, my father has never seen anything of that kind before.”

The idea that we shouldn’t try to isolate Hanson is also coming from the Liberals. So John Howard, of all people, has claimed that:

“I watched this debate back in 1998 and 1999, and the more she was attacked, the more popular she became, because those attacks enhanced her Australian battler image”.

But this is precisely the same attitude that Howard took when Hanson was first elected. Howard’s approach was to refuse to say she was racist and respond with comments such as, “I think the expression ‘racist’ is used altogether too freely in this country.” Labor leader Kim Beazley refused to use the word either.

Howard’s approach was designed to pander to her concerns so he could embrace her racist policies himself.

Howard said he understood why people felt the country was being “swamped by Asians”. After all, it was Howard who had first raised the issue of Asian immigration in 1988. He cut immigration, delivered “bucketloads of extinguishment” of Native Title following the Wik judgement and slashed funding to Aboriginal representative body ATSIC (later abolishing it).

It was only the left—trade unions, Aboriginal activists and socialists along with ethnic community councils—that took up the challenge of opposing her. In the months after her maiden speech there were marches against racism of 4000 in Brisbane, 10,000 in Sydney and 30,000 in Melbourne.

The protests sought to link Hanson to John Howard and opposed the way that he was encouraging and legitimising her from within the political mainstream.

Some say that if we give Pauline Hanson media airtime, she will simply expose herself or be discredited as a result of journalists’ scrutiny.

Exactly the same argument was heard when Hanson first entered politics in 1996. But it was the media that was responsible for making Hanson a celebrity. They embraced the controversy her racism created in the search for higher ratings.

Hanson received dozens of soft interviews on shows like A Current Affair, Sixty Minutes and Nine’s Midday Show. Even after she lost her seat she was still treated as a celebrity and invited onto programs like Dancing with the Stars.

We can’t leave the fight against Hanson to the media or the political mainstream. Demonstrations against Islamophobia and One Nation are vital to driving back racist ideas now too.

One of the key reasons for Hanson’s comeback, after 20 years of failed attempts, is the legitimacy anti-Muslim ideas have been given by the mainstream Islamophobia from the Liberal government and the media.

Hanson has sought to capitalise on this, shifting her target from Asians and Aboriginal people to Muslims.

Islamophobia has been a constant presence over the last 15 years since the beginning of the “war on terror”. Then Prime Minister Tony Abbott began a concerted effort to spread hysteria about Islamic State and the danger of Muslim “radicalisation” in 2014. He began talking in frenzied terms of the threat from “murderous hordes” of a “death cult”. There were a series of sensationalised terror raids, the first of which saw 870 police mobilised to arrest just 15 people.

After the Martin Place siege, the media went into overdrive, labelling the attack an act of Islamic terrorism despite Monis having a history of bizarre, erratic actions and no existing connection with Islamic State.

And again, Labor has failed to oppose the Liberals’ racism, supporting its new anti-terror laws, the bombing of Iraq and Syria and doing nothing to oppose the scaremongering.

Malcolm Turnbull softened the rhetoric but continued in the same direction, saying efforts to keep out refugees were needed to stop terrorism. And it was Coalition MPs like George Christensen and Cory Bernardi who organised Islamophobic stunts like a Senate inquiry into halal certification.

As a result we have seen more hate attack on Muslims, and even a firebombing outside a Perth mosque at the end of June.

The fight against Hanson’s bigotry must go hand in hand with a campaign to reject this mainstream Islamophobia and make it unacceptable.

Last time around, demonstrations played an important role in stopping One Nation as an organisation. In addition to the larger street marches against racism and high school walkouts, there were protests at almost every One Nation meeting where Pauline Hanson tried to speak.

This was a response to their effort to begin building a mass membership party based on racism. In 1997, Hanson went on a national speaking tour to try to launch branches across the country. This was a particularly dangerous development which threatened to give further confidence to racists, and the result would have been an escalation in racist hate attacks.

Protests labelling her ideas as racist helped to isolate the existing racist hardcore from the wider layer of people that voted for the party, and made it harder for One Nation to recruit members and establish branches. After thousands protested against her visit to Perth, Pauline Hanson admitted it was “the worst 24 hours of my life”.

This time around, Hanson is less likely to try to repeat the efforts to hold meetings and set up a string of branches around the country.

It proved disastrous at the last attempt. One Nation finally imploded as a result of internal tensions in 1999. So suspicious were they of ordinary One Nation members that Hanson and two of her closest advisers set up a completely undemocratic party structure to try to entrench their own direct control. This was a response both to infiltration by other far right and fascist groups, as well as the climate of siege on the party the protests created. Hanson said they wanted to set up a “bullet-proof” organisation designed to “protect it being attacked and broken down”.

But the immediate challenge now is to find ways to pull together broad opposition to Pauline Hanson’s racism and the mainstream Islamophobia that is feeding her.

But we also need to present an alternative to the unemployment, low pay and cuts to public services that create fertile ground for Hanson.

There is widespread disgust at the political elite due to their failure on jobs and three decades of neo-liberalism and cuts. Here the Margo Kingston has a point, saying that “running class-based ridicule” against Hanson can feed into the idea she is some kind of challenge to the political system.

Hanson tries to appeal to anger about jobs and living standards. She has slammed the mainstream parties, pointing out that, “Country towns that were once thriving with miners or the farming sector, now out of jobs are becoming destitute. Industries and manufacturing continue to close down”. She rails against free trade agreements and tariff cuts for costing jobs and devastating farmers.

Her vote was high particularly in rural areas of Queensland, in seats like Maranoa and Kennedy where unemployment is 13 per cent, and regional towns like Bundaberg with 16.1 per cent unemployment. In areas suffering from the downturn in mining, Turnbull’s rhetoric about “exciting times” and new economic opportunities only reinforced how out of touch the government is.

Hanson’s racism is designed to turn people’s anger against Muslims, Asians and Aboriginal people. In this too she is following in the footsteps of the major parties. It was the unpopularity of Abbott’s attacks on Medicare, pensioners and the unemployed, in his 2014 budget, that led to him escalating his rhetoric about terrorism and Muslims further and further.

Isolating Hanson requires building a fighting left that can pose a real alternative to the politics of fear and division and fight to improve people’s lives. We need more strikes to fight for jobs, wages and decent working conditions, and a serious defence of Medicare and other services being cut by the government.

We need to channel the real anger and pain being felt by workers and the unemployed against big business and the Coalition, those really responsible for making people’s lives a misery. The solution is not to blame migrants and Muslims but to reverse neo-liberal policies and tax the rich to fund jobs and services.