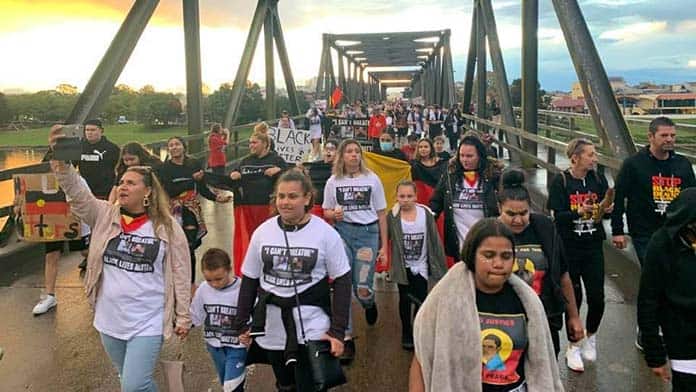 Over 200 people joined a young, energetic rally in Kempsey last Friday, the home of Dunghutti man David Dungay Jnr, who was killed in Long Bay Jail in 2015. The similarity between David’s murder and George Floyd’s in Minneapolis, with both calling out “I can’t breathe” as officers held them down, has been a trigger point for protests in Australia.

The action in Kempsey was part of a national weekend of action against Indigenous deaths in custody. In Brisbane 1500 marched on Saturday, while 1000 took to the streets in Newcastle and over 2000 gathered at Djarrbarrgalli (the Domain) in Sydney.

The rallies in NSW took place despite attempts by police and the state government to stop the demonstrations, using the excuse of the coronavirus health measures. Yet Newcastle organisers successfully won a court case in the NSW Supreme Court, and had their rally declared legally authorised. This should make it much easier for future demonstrations to take place without police harassment.

In her decision Justice Christine Adamson explicitly described the protest as “low risk”, based on the advice of NSW Chief Health Officer Dr Kerry Chant. She also noted that “significantly more” people (up to 1000) are permitted at football stadiums and community sports events (up to 500) in NSW, but the police had argued the health regulations limited protests to just 20 people.

Despite police refusing to authorise the rally or a march in Kempsey, protesters successfully defied the police, taking to the road and marching through the town across a central bridge over the Macleay River. Locals showed their support from nearby shops and passing cars. Riot police were waiting in the wings, but wouldn’t dare try to disperse the strong crowd.

David’s mother Letona Dungay, along with Elizabeth Jarrett, welcomed the rally to Dunghutti country, declaring, “Our culture is still alive… respect to everyone who came today to support and make sure the world knows; stop Black deaths in custody, we’re going to keep coming.”

The rally was largely made up of Indigenous families from Kempsey and surrounding areas, as well others who travelled from Sydney and Armidale—including the family of Tane Chatfield, a young Aboriginal man who died in Tamworth jail in 2017. After spending two years in prison, Tane and his family were expecting his release, when he was found dead in his jail cell in September 2017. Cuts and bruises were found on his body. Corrective services say he committed suicide, but the family maintains that he was murdered.

A coronial inquest beginning on 13 July will reveal more about the case, but Tane’s family know the court system will never deliver justice for First Nations people. “We know the coronial inquiry will rubbish us, but we want to come out of it with something,” Tane’s father, Colin Chatfield, told Solidarity. “We want justice”

Whatever the coronial inquest finds, one thing is for sure; a racist system killed Tane Chatfield along with David Dungay.

Paul Silva, cousin of David Dungay, also addressed the rally, saying, “Our family has been on the front foot fighting for justice for David… we’re demanding systemic change in the justice system, whether it’s jail or police custody. A lot should change.”

Paul led the rally into town as the rain cleared. Young kids, who face racism every day of their lives, led the march chanting, “Justice today for David Dungay” and “Black lives matter.”

Since the 1991 Royal Commission into Indigenous Deaths in custody, 438 indigenous people have died in Australian prisons. Not one police or corrections officer has been convicted over these deaths. Indigenous people are grossly overrepresented in the prison system, making up 28 per cent of Australia’s prison population, but only 3 per cent of the total population.

On 28 July a week-day rally in Sydney will march to NSW Parliament to present a petition, along with a letter signed by unions, to demand the establishment of an independent body to investigate and prosecute over deaths in custody cases such as Chatfield and Dungay.

The Black Lives Matter movement has thrust the brutality of our racist police system into the spotlight. The protests in the US have won significant concessions. The strength from Indigenous community in Kempsey shows the spirit we will need to win justice for these families and for all those killed in custody.

By Jordi Pardoel and Cooper Forsyth