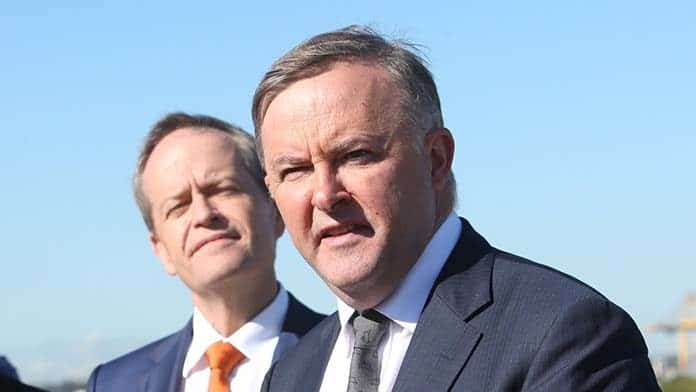 Labor’s post-election review has confirmed the party’s shift to the right which began when Anthony Albanese became leader.

Gone is the use of the term “big end of town”, which Bill Shorten used to summarise the Liberals’ plans for tax cuts for big business and their unwillingness to call a Banking Royal Commission.

In comes an emphasis on Labor “as a party of economic growth and job creation. Labor should adopt the language of inclusion, recognising the contribution of small and large businesses to economic prosperity”.

Virtually no one expected Labor to lose the election. In one regard, the result was tight—decided by 220,000 voters on a two-party preferred basis, with the Coalition gaining a majority of just three.

But while there were swings to the ALP in Victoria and in inner-city seats, Labor was routed in Queensland and Western Australia, where it now holds only 11 of 46 seats. Its one Senate seat in Queensland is its worst result since 1949.

It is these results that drive the post-election review. The authors write: “Labor did not adequately acknowledge the legitimate desire of Australians for improved living standards for themselves and their children through their own hard work and initiative, even though this has always been integral to the Labor story.”

This is not-so-subtle code for a full-scale retreat from tax increases on the wealthy (franking credits and negative gearing), abandonment of ambitious plans for public school funding and a new emphasis on the suburbs.

As the review argues: “Labor should broaden its support base by improving its standing with economically insecure, low-income working families, groups within the Christian community and Australians living in regional and rural Australia.”

None of this is new. In 2003, Mark Latham, now leader of One Nation in NSW, wrote a book entitled From the Suburbs shortly before becoming Labor federal leader. In it he argued: “The powerful centre of our society, concentrated in the international heart of the major cities, talks a different language from suburban communities. In lifestyle and political values, they are poles apart.”

Labor is looking to its past in other ways, too. As Albanese put it in a major speech in late October: “Like Bob Hawke and Paul Keating, I understand that building the future means we must first and foremost be in the business of creating wealth, as well as ensuring it is distributed fairly.

“Labor is proudly and resolutely pro-growth. We understand that successful businesses and a vibrant economy are essential prerequisites for job growth.”

The Labor review is significant also for what it doesn’t say. There’s no reference to increasing Newstart, even though the Coalition is entirely isolated on the question.

There’s only a nod to the union movement—instead there’s a statement that “Labor’s policy formulation should be guided by the national interest, avoiding any perception of capture by special interest groups”.

The emphasis on “suburban values” signals a retreat on refugees, discrimination against LGBTI school staff, the right to protest and other so-called politically correct issues.

Yet the review argues that Labor should make these changes in direction “without compromising existing support”.

The issue where the ALP faces the biggest challenge to walk both sides of the street is climate change.

The review argues: “Labor’s ambiguous language on Adani, combined with some anti-coal rhetoric, devastated its support in the coal mining communities of regional Queensland and the Hunter Valley.”

Yet it insists that: “A modern Labor Party cannot neglect human-induced climate change. To do so would be environmentally irresponsible and a clear electoral liability.”

The result is total incoherence, that will continue to satisfy no one.

In his keynote speech last month, Albanese tacked left, arguing that a shift to renewables can generate new jobs. “The world is decarbonising. With the right planning and vision, Australia can… enjoy a new manufacturing boom.”

Yet in the next breath, he tacked right, celebrating the export of liquid natural gas—a fossil fuel—to south-east Asia and the use of metallurgical (coking) coal to produce wind turbines.

Labor could break out of this impasse—moving to 100 per cent renewables while creating good jobs for fossil fuel workers along the way.

But it would mean junking the market and making massive public investment in new power stations, batteries and other storage, and improved transmission networks, funded by taxing big business.

Albanese’s turn to the right rules out such a solution. So Labor will continue to wallow, pleasing no one and giving Scott Morrison the easy run he doesn’t deserve.

We will need a revitalised, fighting union movement and stronger social movements around climate change, refugees and for public services in order to shift politics back to the left.