‘Don’t scab, get the jab’—a slogan no unionist should use 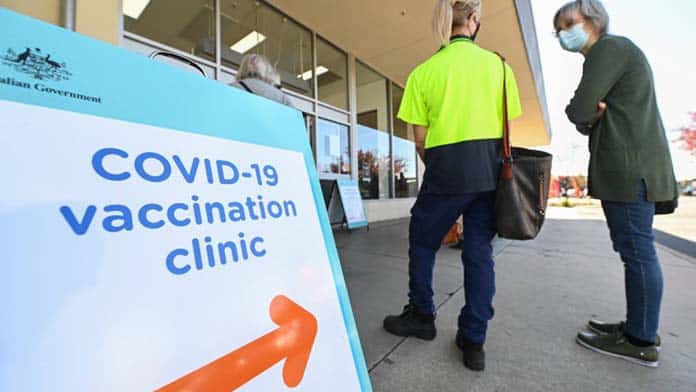 Last week saw hundreds of construction workers protest outside the Melbourne CFMEU office against mandatory vaccination and the threat of sackings.

Unions have rightly been encouraging members to get vaccinated. But the idea that people unsure about getting a jab are all “anti-union” or “scabs” is wrong. The slogan “Don’t scab, get the jab” can only create divisions among workers while at the same time downplaying the seriousness of scabbing.

For unionists, scabs are the lowest form of life. They kow-tow to the bosses; they break strikes; they break the solidarity that workers need to fight the boss.

The people who took wharfies’ jobs in 1998 when Chris Corrigan and the Liberal government tried to break the maritime union, for example, were scabs.

The vast majority of those concerned about vaccination are not hard anti-vaxxers or fascists—they can be won over. In construction, surveys by large Melbourne building companies found that just 1 per cent were strongly resisting vaccination while another 11 per cent said they were “still considering the issue”.

It makes a huge difference if unions are pro-active building confidence among their members, rather than letting the bosses and governments mandate vaccination. The Health Services Union in NSW, for instance, held an online forum with 500 members to deal with concerns and turned around 30 per cent of those who were hesitant in one sitting.

Calling those with concerns scabs and implying that they are strike-breakers who are not wanted in the union will only worsen existing divisions, weaken the unions and push people closer to the far right and the anti-vaxxers. Abusing someone who is vaccine-hesitant does nothing to convince them to get vaccinated—just the opposite.

The government is using mandatory vaccination to cover its own failures to roll out the vaccine much earlier and to properly resource hospitals. Just as it has done throughout the COVID crisis, it is trying to shift the blame onto individuals.

For months there has been inadequate supply of vaccines as a result of Morrison’s failures. And getting jabbed is still far more complicated than it should be. People working full-time have been forced to organise appointments in their own time. Workers should get paid time off to attend appointments.

Contrary to the impression being created by the media and the ACTU, many unions do not accept mandatory vaccination. Even the Victorian branch of the CFMEU says it does not support it.

The Queensland building trades (CFMEU, the Electrical Trades Union, the Australian Manufacturing Workers Union and the plumbers’ union) said on 18 August: “We strongly oppose any coercive ‘no jab-no job’ restrictions for construction workers,” and declared that “punitive measures that create two classes of citizens is not a path out of this pandemic”.

The secretary of the Victorian Health Workers Union, Diana Asmar, told the Herald Sun: “HWU members that are not wanting to get the vaccine are not ‘anti-vaxxers’ but rather have concerns about the implications of the vaccine on their personal health.”

The Victorian secretary of the Rail Tram and Bus Union, Luba Grigorovitch says: “Mandatory vaccination breaks down trust and dialogue and results in greater hesitancy. Workers must be trusted to make their own good decisions and be provided with opportunity and access to medical advice, education campaigns and easy to access vaccines, which still remain to be seen.”

The Victorian Building Industry Group of Unions also issued a statement on the Monday night after the protests, saying: “We maintain the view that the construction industry would have voluntarily reached high levels of vaccination without a heavy-handed approach.

“This heavy-handed mandate by the Chief Health Officer, which was implemented with no notice, has only served to drive many people towards the anti-vax movement.”

They are right—vaccine mandates put a gun to workers’ heads by threatening their jobs and will generate resentment and anger, making it harder to convince anyone who is hesitant about the vaccines.

But CFMEU members who voiced the same concerns, and asked what would be done to defend those who faced losing their job, are now being forced out of the union and out of a job. More unions are going to face the same dilemma.