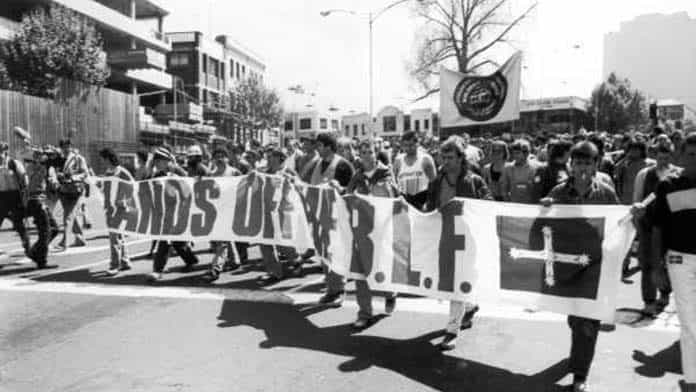 Tom Orsag looks at how deregistration in 1986 virtually destroyed the Builders Labourers Federation, in a warning for unions facing the same thing today

Union members denied the union of their choice at police gunpoint on government orders. Their union leader jailed. The union offices raided for membership lists and its funds stolen by the government.

This was not the work of a military dictatorship, but of Labor governments in their efforts to break construction union the Builders’ Labourers Federation (BLF).

In 1986, the BLF was deregistered in NSW, Victoria and the ACT, then its areas of largest membership. This meant it was banned from striking agreements with employers and lost the right to appear in industrial courts to represent its members.

Laws against it were drawn up by Prime Minister Bob Hawke in Federal Parliament. The union’s organisers were also banned from building sites and construction workers were forced to resign from the union or lose their jobs.

Simultaneous laws were introduced by State Premiers in NSW and Victoria. Steve Crabb, then Victorian Minister for Industrial Relations, set in motion police raids on the BLF offices to confiscate its membership list and the union funds.

Today the Liberal government is again threatening to deregister unions with its “Ensuring Integrity” legislation. The construction division of the CFMMEU and its Victorian Secretary John Setka are the main target. Last time deregistration succeeded in smashing the BLF. We have to make sure this doesn’t happen again.

The targeting of the BLF began with a Royal Commission under Malcolm Fraser’s Liberal government in 1981. It was designed to deliver a raft of anti-union headlines and hunt down evidence against the BLF.

After spending $1 million of public money, the Royal Commission finally discovered that BLF Secretary Norm Gallagher had asked bosses to provide him $100,000 in building materials for his beach house. Gallagher eventually went to jail for corruption.

But the move on Gallagher was part of a concerted effort at union busting. The builders who had corruptly paid him got off with fines or a slap on the wrist.

The BLF had been too successful for its members, winning wage rises, shorter hours and safer working conditions. The union also had a proud record of support for Aboriginal rights and the environment, made famous through its Green Bans in NSW in the 1970s.

The BLF knew how to turn the short-sighted greed of the builders to its members’ advantage. The union would pick key events in the building cycle like the concrete pour to hold lightning stoppages. Such action could cost the bosses dearly.

BLF organisers were also willing to risk arrest for defying the courts and anti-union laws, and BLF members willing to strike until they were released.

It was the BLF’s opposition to the Prices and Incomes Accord that finally led to deregistration. The Accord was agreed between the peak union body, the ACTU, and the Labor government when Bob Hawke came to power in March 1983. It saw the union movement agree to accept a limit on wage rises, supposedly in return for increases in the “social wage” in health and education spending.

Australian bosses wanted to cut wages and curb union power in order to restore profits following a series of recessions. Between 1971 and 1983, Australian strike days per worker were 30 per cent higher than the average among the OECD developed economies.

The Accord imposed wage cuts of about 7.5 per cent in its first five years.

It was endorsed at the 1983 ACTU Conference without a single dissenting voice. The BLF’s Norm Gallagher was on the ACTU Executive. He had doubts but refused to raise them publicly.

When the small Food Preservers’ Union was threatened with deregistration in late 1984, over a strike demanding a wage increase beyond the Accord limits, the BLF supported them. But it did little to organise a political campaign against the Accord within the union movement.

In late 1984, the Financial Review gloated that, “The Hawke government has become a jailer for unions which dare to buck the Accord consensus, and the ACTU has become an industrial police force.” Little did the BLF appreciate how far the ACTU and the Labor Party were willing to go.

In 1984-85 the economy recovered and the BLF refused to be bound by the Accord framework, using strike action to force higher pay rises and demand shorter hours from employers. This was too much for the Labor government.

Pressure was building on the Accord as a whole, as the Melbourne Age noted in November 1985, “The same officials who two years ago, spoke of the wages tank as being empty, now speak of the difficulty of holding wages down while profits keep rising.”

The state and federal Labor governments marshalled all the powers at their disposal to force building companies to “hold the line”.

The Federal Government and the state governments drew up Codes of Conduct for building companies to stop them dealing with the BLF or paying wages above the Award limits. Building companies who refused faced the loss of federal government work. In Victoria, Premier John Cain threatened to hold up planning permits and cut off gas, electricity and water to building sites.

As Clive Bubb, of the bosses’ association the Master Builders Australia put it, “This is a fully coordinated, carefully structured, national campaign dedicated to ridding our $15 billion a year industry of the BLF blight.”

Norm Gallagher did not appreciate the forces arraigned against the union. Three weeks before deregistration in April 1986, he blustered that, “An analysis of Crabb’s ‘master plan’ shows it to be merely wishful thinking. Most building unions are already complaining of its impracticality.”

The union had been deregistered before. The BLF had survived deregistration between 1974 and 1976, and even increased its membership during the period. Then, under a Liberal government, the ACTU had supported the union and the wider union movement refused to poach its members.

This time the ACTU was united with the Labor government in its assault on the BLF. Rival unions the Building Workers’ Industrial Union (BWIU) and FEDFA, the crane drivers’ union, set out to carve up the BLF’s membership. This was all the more appalling as the BWIU had a reputation as a left-wing union, led by former Communist Party members Tom McDonald and Pat Clancy.

Large contingents of police moved onto building sites around Sydney, Melbourne and Canberra to help employers and union organisers intimidate rank and file BLF members to join the BWIU.

Their methods of surrounding Builders’ Labourers on site or locking them in a shed were so blatant that even The Financial Review admitted that labourers were “heavily leaned on”.

Key BLF organisers like Victoria’s John Cummins were arrested and jailed for six nights for “trespassing” when they tried to go onto building sites.

Former BLF members attempted to organise within other building unions including the BWIU. The leadership of the union tried to ignore them, cancelling meetings and even union elections.

The Victorian state Labor government provided the BWIU with money to finish the job. In February 1988, The Age noted it had handed the BWIU $500,000 to “promote occupational health and safety.” Its editorial asked pointedly, “Were the payments in any way designed to help the union fight off the remnants of the BLF in the recent union elections?”

Despite all this, the BLF continued to fight on, particularly in Victoria. Many supporters there continued to maintain BLF membership alongside that of other unions. In 1993 what was left of the BLF amalgamated with the BWIU into the new super union, the CFMMEU.

Former BLF officials including John Cummins and John Setka would go on to play important roles in the new union.

The Labor Party was founded by unions to represent their interests, and by extension workers’ interests, in parliament. Yet it was Prime Minister Bob Hawke and a series of Labor governments who set out to break the BLF. This was a lesson in how far Labor is prepared to go to defend capitalism and serve the interests of the bosses.

When it came to the crunch only one single Labor Left MP, Queensland Senator George Georges, voted against the anti-BLF laws. He was threatened with expulsion and ended up with a three-month suspension for his defiance.

Despite votes against the laws at two Labor Party Conferences in 1985, Victorian Premier John Cain could write that, “We just continued to ignore them.”

The smashing of the BLF marked a turning point for the Australian working class, comparable to the defeat of the air traffic controllers’ union in the US in 1981-82 by President Ronald Reagan and the defeat of the British miners’ strike in 1984-85 under Margaret Thatcher.

It deepened the collapse in strike levels and the downturn in class struggle, paving for the way for further neo-liberal attacks.

But it needn’t have been that way. The BLF was only defeated because of the failure of other unions to offer solidarity.

The major left unions in the building and metal trades abandoned it. Unions like the AMWU and the BWIU chose to enforce the Accord by scabbing, and in the case of the BWIU stealing members from the BLF.

The result is that today the union movement as a whole is far weaker.

This time around any effort to deregister the CFMMEU must be opposed by the trade union movement as a whole, not simply in words, but through mass protests and stop work action.