Cops crackdown on Extinction Rebellion—defend the right to protest 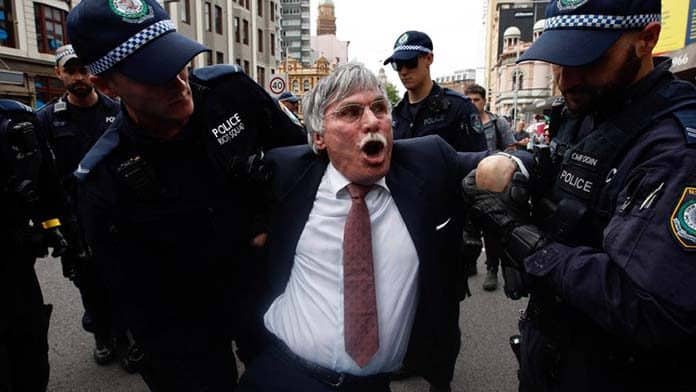 Extinction Rebellion (XR) actions blocking traffic and producing dozens of arrests have ignited a media backlash. Police have launched a major crackdown. In Sydney and Brisbane they used “wrist locks” to arrest non-violent protesters that in Sydney saw 75-year-old environmental scientist, Martin Wolterding, sent to hospital for checks on a swollen wrist and bruising.

In Sydney they imposed ridiculous bail conditions on arrested protesters, banning them from the city and from associating with other members of XR.

Extinction Rebellion advises activists to be polite and respectful towards police. Some think that they can be won over. XR members in London have chanted, “Police, we love you—we’re doing this for your children.”

But the police can never be on our side. Their job is to “maintain order”—to ensure the continuation of business as usual. There is a long history of brutal police treatment of protesters, trade unionists and Indigenous people.

The police’s role is to defend the rich and powerful. Behind them are governments and corporations who are profiting from destroying the planet.

Peter Dutton dialled up the hysteria further, demanding protesters lose welfare payments and face mandatory jail terms. He also incited right-wing vigilante action, suggesting, “People should take these names and the photos of these people and distribute them as far and wide as they can so that we shame these people.”

All this represents an attack on the basic right to protest—for doing nothing more than disrupting traffic.

The Extinction Rebellion protests have shown that there is a movement of people prepared to take disruptive action for the climate. This can inspire more people to take action.

But blocking traffic alone will not force change. The climate movement needs clear demands and a strategy to link up with the unions and the working class. Extinction Rebellion’s demand for a climate emergency declaration has been taken up by numerous governments while they carry on polluting with business-as-usual.

The movement needs to put the issues of jobs, and public investment in renewable energy and public transport, at its centre.