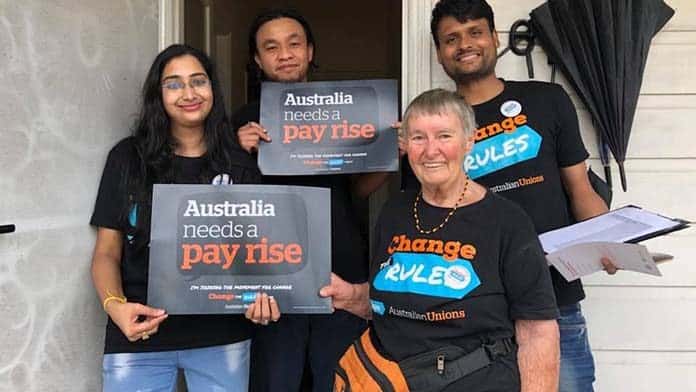 Thousands of union members and officials gave up their time to doorknock, phone-bank and staff polling booths for the Change the Rules campaign. But the campaign has been a spectacular flop, failing to deliver a swing to Labor and wasting millions of dollars of members’ money in the process.

The ACTU boasted that they spent more money than ever before on TV and radio advertising.

The focus on marginal seat campaigning was based on the flawed idea that electing a Labor government that had promised to change some of the worst anti-union laws could dramatically improve the unions’ position.

It failed to achieve even this very narrow electoralist goal. Of the 14 seats targeted by the ACTU that were not newly created, Labor’s primary vote actually went backwards in ten of them, and by more than the national average.

Given that the ACTU spent almost $25 million on this two-year campaign, this is a disastrous result and should prompt serious soul-searching. Instead, the ACTU Secretary Sally McManus said it had been “a magnificent campaign” and blamed its lack of impact on paid advertising by Clive Palmer and Morrison’s talking points on tax.

But workers are much more susceptible to those messages when the level of union mobilisation and struggle is low. Change the Rules never seriously set out to mobilise workers in mass action.

The previous union campaign Your Rights at Work that torpedoed John Howard’s re-election in 2007 at least featured mass demonstrations and strikes. Thousands of unionists came together in all-union delegate meetings to launch the mass stopwork demonstrations. Despite threats of $22,000 in fines, up to 500,000 workers took action nation-wide. This helped win the argument against Howard’s anti-worker laws amongst wide layers of the population.

The first rally had cost the bosses $20 million in lost profits. An ongoing strike campaign could have even stopped Howard passing his anti-union Workchoices legislation.

Ultimately union leaders funnelled the energy of the mobilisations into a marginal seats campaign. This was a huge mistake because it gave Labor a blank cheque, and Labor ended up passing laws which still severely restricted union organising.

As a result the campaign has not built the industrial muscle of the unions and leaves workers no better off to fight the imminent attacks from Morrison and emboldened employers.

But even if it had managed to get Labor elected, our ability to fight would not have been much improved. Labor tacked left on some workers’ rights issues, but refused to support key demands like the right to strike or industry wide bargaining.

Waiting for the election

Unfortunately, most union leaderships supported Change the Rules uncritically and accepted the logic of waiting for a Labor government instead of fighting the bosses for immediate gains.

When the Liberals slashed penalty rates, instead of bringing workers out on the streets or trying to fight the cuts industrially they called press conferences and told people to vote Labor. When the Liberals hit the construction unions with the restrictive building code, the unions fought back initially. But eventually they gave up and signed shorter enterprise agreements compliant with the code, hoping to renegotiate these agreements after an expected Labor win.

The maritime union did not call workers out on strike when shipping crew were sacked, focussing instead on its Australian Shipping campaign to lobby Labor. When bosses terminated agreements, instead of leading a fight to maintain conditions union leaders simply argued that the solution was to elect Labor because it was going to ban the terminations.

The “wait for Labor” strategy now lies in tatters. We need a plan to resist the anti-union laws that will still be on the books over the next three years. The ABCC is still terrorising construction workers. Labor hire companies are still undercutting existing conditions and employers are rushing to terminate even more agreements.

But we can turn things around. The successful strikes at Chemist Warehouse and Boom Cranes show that the best weapon we have against the bosses is still a united group of workers willing to take militant action and break the rules. Workers at Boom defied the law, organising secondary boycotts and other militant tactics to win a decisive victory.

We need to generalise these tactics across the whole union movement and we need the ACTU to organise industrial support for anyone who breaks the anti-union laws. If we are to win any of the things Labor promised, we will need to build a rank-and-file revolt against Morrison and the bosses.