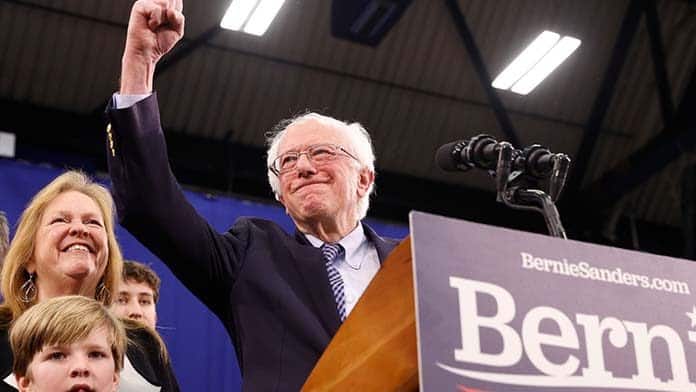 Bernie Sanders’ campaign has galvanised support in the early Democratic primaries, but will he be sabotaged again, asks Lachlan Marshall

Bernie Sanders has electrified the Democratic primaries, pulling thousands to rallies with his radical, left-wing message.

In a country that waged the Cold War against the Soviet Union, few expected a presidential contender who proudly calls himself a “democratic socialist” could be the frontrunner. But that’s what has happened after he won the most votes in the first two contests—Iowa and New Hampshire.

His unflinching criticism of billionaires has struck a chord as more and more people have become disillusioned with the politics of party elites. His rise comes on the back of a re-emergence of strikes and as politics becomes more polarised across the world. Growing numbers of people in the US are interested in socialism.

Sanders is a veteran independent Senator for Vermont who caucuses with the Democrats.

He lost the 2016 nomination to Hillary Clinton after the party establishment threw its weight, and the votes of unelected party super-delegates, in her favour. Now he is again attempting a radical assault on the Democratic Party establishment. Many people think Sanders can win the nomination this time.

While he does not call for the overthrow of capitalism, Sanders’ popularity rests on his call for a “political revolution”—introducing Medicare for All, a Green New Deal and a $15 an hour minimum wage. A million people volunteered for his campaign in the 24 hours following its announcement and he’s raised more money than any of the other frontrunners, mostly from small donations.

The Democratic primaries will decide who takes on Trump in the presidential election in November. Sanders consistently leads Trump in head-to-head polls.

Sanders and the neo-liberal Pete Buttigieg have made the running in the first two primaries. Buttigieg was named the winner in Iowa, despite receiving fewer votes than Sanders. He scraped past Sanders in the “state delegate equivalents” count used to determine the winner. Sanders narrowly won New Hampshire.

Former Vice President Joe Biden—the favourite of the Democratic establishment—has been humiliated, coming fourth in Iowa, and fifth in New Hampshire, after a series of gaffes and embarrassing stumbles as he attempted to answer basic questions.

The left in the US has backed Sanders and there is a strong movement behind him, unlike any of the other candidates.

The Sanders campaign has pulled other candidates to the left—at least at the level of rhetoric. Elizabeth Warren is often grouped with Sanders as a “progressive” candidate because of her promise of “big, structural change” and criticism of the rich.

But after initially supporting Medicare for All, Warren’s plan is to now pass legislation in the third year of her administration. This is widely interpreted as meaning that it simply won’t happen, because any meaningful legislation usually passes at the beginning of a president’s term.

Warren’s attempt to appeal to Sanders’ progressive base alongside more conservative Democrats is costing her support in both camps. After early promising polls, Warren’s support has either flowed left to Sanders, or right to Buttigieg.

The Iowa and New Hampshire primaries have been a major setback for Joe Biden.

As a former Vice President under Obama, he’s seen by the corporate and Democrats elite as someone who can return US capitalism to normal, maintaining the rule for the rich, and winding back Trump’s erratic foreign policy moves that have alienated allies.

Despite having a strong base of support among people of colour, Biden has an unseemly record of working with Southern racists in the 1970s and 1980s to oppose desegregation of bussing. He wrote the 1994 crime bill which sent thousands more cops into black neighbourhoods and funded new prisons, contributing to the mass incarceration of people of colour.

Biden will hope his campaign can recover in the “Super Tuesday” primaries on 13 March when states with high proportions of black and Latino voters go to the polls.

Buttigieg is a former military intelligence officer in Afghanistan. He is the first openly gay person to seek the Democratic nomination for President. But, like Biden, he stands for a continuation of the neo-liberal status quo. Whereas the Sanders campaign prides itself on winning small donations, Buttigieg has dismissed these as “pocket change,” and receives most of his donations from big business.

Buttigieg supported Medicare for All early in the campaign, only to drop it in favour of “Medicare for all who want it.” He now attacks single-payer health insurance in line with the interests of his health and pharmaceutical industry donors.

But despite his good early showing, Buttigieg does not poll very strongly in the states with large minority populations which are crucial to winning the Democratic nomination. This has created a problem for the Democratic establishment as they now lack a clear anti-Sanders frontrunner. In 2016, the right-wing establishment united behind Hillary Clinton.

The billionaire media mogul Michael Bloomberg, who is bankrolling his own campaign, could yet emerge as the establishment favourite if he does well in the “Super Tuesday” primaries.

Sanders bases his policies on the administration of Franklin D. Roosevelt, who expanded union rights and public works during the 1930s Great Depression.

As Sanders explained in a speech, “Over eighty years ago Franklin Delano Roosevelt helped create a government that made transformative progress in protecting the needs of working families. Today, in the second decade of the 21st century, we must take up the unfinished business of the New Deal and carry it to completion.”

These policies could really improve the lives of American workers, yet establishment Democrats claim that these policies are a “big target” that will alienate conservative voters.

But FDR’s New Deal wasn’t socialist. FDR aimed to save capitalism from itself, at a time when it had lost all credibility. As FDR admitted, he was, “the best friend the profit system ever had.”

And because Sanders plans to take the helm of the US state, he has made compromises on nationalism and imperialism.

Sanders was one of few politicians to oppose the invasion of Iraq. But he supported the war in Afghanistan, and has suggested that the US state under progressive leadership could lead an international effort to move China towards democracy.

On “Super Tuesday”, 14 states will vote on the same day. But the nomination won’t be confirmed until the Democratic National Convention in July.

Despite his popularity, it will be very difficult for Sanders to win the nomination. He’s seeking the endorsement of a pro-capitalist party that is against everything he stands for.

If Sanders looks like he is taking the lead, the party establishment would stop at nothing to sabotage his campaign, much as the Blairites did to Jeremy Corbyn in the UK.

Emails leaked from Democratic National Committee (DNC) members in 2016 revealed a strong bias towards Hillary Clinton and a campaign to undermine Bernie Sanders.

Even though she is not a candidate, Clinton is playing dirty, levelling accusations of misogyny and anti-semitism at the Sanders campaign, despite Sanders being Jewish. It is even rumoured that former president Barack Obama would oppose Sanders if it looked like he would win nomination.

More recently DNC members flagged reversing the 2018 rule change that limited the role of “superdelegates” (party elites) at the Democratic National Convention. Currently superdelegates can only vote if there is not a majority winner in the first ballot.

If Sanders loses, he says he’ll support whichever candidate wins the nomination, just as he supported Hillary Clinton in 2016. That was a disaster that ensured Trump was elected.

But it could easily happen again. The Democrats are a straight-out party of US capitalism.

They do not have any real internal conferences to speak of. There is no formal membership process, so there are no structures through which the members can hold party officials to account. Decisions are made by an opaque bureaucracy and the capitalist funders of the party.

These are the people that scuttled Sanders’ nomination last time.

Since Trump’s election there have been waves of struggle across the country—women’s and anti-racist marches, strikes and mobilisations for migrants and the climate.

2018 saw the highest number of striking workers since 1986. Teachers have taken strike action in states that voted Democrat and Republican, from Chicago to West Virginia. In 2019, 50,000 workers at General Motors staged the longest strike for 50 years.

Sanders reflects this insurgent mood amongst a section of workers. But workers can only rely on their own organisation and strength to win improvements to their lives.

The Sanders campaign has created a big opportunity for socialists in the US. His popularisation of socialism, alongside the mobilisations against Trump, have contributed to a massive growth in the Democratic Socialists of America (DSA). The DSA often run candidates in Democratic Party primaries, and have endorsed Sanders for president, and are canvassing votes.

Unlike most other advanced capitalist countries, the US has no social democratic or labour party with formal ties to the union movement. The Sanders campaign is an opening to argue for, and build, a socialist party.

The support for Sanders is a sign of the widespread disenchantment with corporate and elite politics. Whatever happens with Sanders’ nomination, the “political revolution” he talks about will only come if the movement behind Sanders is galvanised into a movement of action across the United States.

Building struggle in workplaces and on the streets will be needed if Sanders’ policies are actually going to be won.