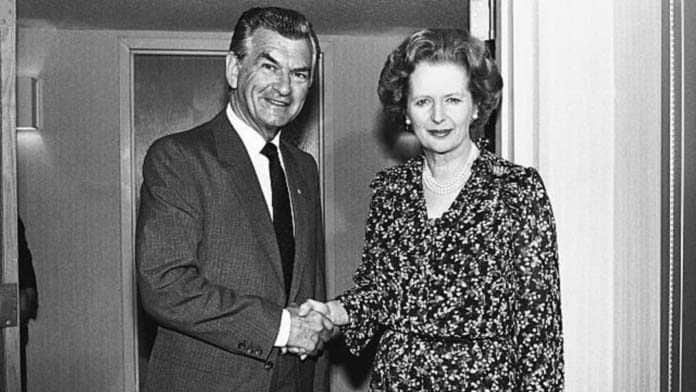 Bob Hawke has been lauded for his consensus politics, but he waged a brutal assault on unions and Labor’s own working class supporters, argues Ian Rintoul

Conceding defeat on election night, Bill Shorten said, “I wish we could have done it for Bob”. But Bob Hawke, who died just before the election, was more responsible than anyone for Labor’s loss of support amongst its working class base, and the decline of union membership.

There is a reason that Hawke was lauded across the political spectrum, including by the Murdoch press: Hawke was Australia’s Margaret Thatcher. Hawke’s “economic rationalism” was an early version of what is now known, and condemned, as “neo-liberalism.”

The tributes have celebrated Hawke as a man who brought unions and business together and introduced reforms that ensured Australia’s prosperity. But his Prices and Incomes Accord was a blatant wage-cutting exercise. Hawke shackled the unions while his reforms boosted corporate profits.

The floating of the dollar, financial deregulation, privatisation and labour market deregulation dramatically shifted wealth away from workers in favour of big business.

This set the scene for subsequent Labor governments’ slavish embrace of the market.

Even before entering parliament, Bob Hawke had a bad reputation as head of the ACTU. He was known as “the Fireman” because of his role in ending strikes and hosing down disputes. His first loyalty was to Australian capitalism.

Hawke took over as ACTU President in 1969, the year of the general strike to free jailed union official Clarrie O’Shea. Although rank and file struggle was on the rise, Hawke wanted to hold it back.

When Gough Whitlam was sacked as Prime Minister in 1975, workers spontaneously walked off the job around the country. But Hawke told them to go back to work, saying “don’t strike, donate a day’s pay to Labor’s election campaign”. With workers demobilised, Labor lost the election to Malcolm Fraser.

Hawke has been lauded for introducing Medicare, but the story is not so straightforward. Medibank (as Medicare was then called) had been introduced by the Whitlam government. After his sacking by the Governor-General in 1975, Malcolm Fraser’s Liberal government began dismantling Medibank.

Angry mass meetings of rank and file unionists pushed for Australia’s first general strike in July 1976 to save Medibank. True to his reputation, Hawke spent the strike day playing tennis. What could have been a major victory over the Liberals was turned into a defeat that allowed Fraser to dismantle Medibank as a universal health care system.

Hawke came to power in 1983 with the Australian economy still in turmoil following the end of the post-war boom in the mid-1970s. The country had just experienced its second major recession in ten years. But the union movement remained strong, and was still capable of fighting for significant wage rises.

Hawke set out to break this. With the connivance of most union officials of the day, Hawke introduced the Prices and Incomes Accord, which imposed savage wage cuts far more effectively than any Liberal government could have done.

The Accord also ended the principle that wage rises should be tied to increases in the cost of living, instead demanding increases in productivity through changes that forced workers to work harder in return for pay increases.

Unions that opposed the wage-cutting Accord were savagely attacked. When the Builders Labourer’s Federation (BLF) tried to break the Accord straitjacket, the Hawke government permanently deregistered the union in 1986, and collaborated with the bosses to drive the union out of the construction industry.

In 1989, Hawke used the RAAF to break the pilots’ strike, when they attempted to get a wage rise outside the limits of the Accord.

With wages determined through the bureaucratic Accord process, there was no need to maintain shopfloor union organisation and militancy. This resulted in the beginning of the enormous decline in union membership as it dropped from almost 50 per cent of the workforce when Hawke came to power to 40 per cent by 1990 and 31 per cent in 1996.

The aim of all this was to restore big business profits, massively shifting the economy in favour of the bosses.

The wages share of the economy fell from 61.5 per cent when he took power to less than 55 per cent when Labor lost office, amounting to a transfer of $50 billion from workers to the rich.

By the time Labor lost office in 1996, the average factory worker had lost $100 a week in pay in real terms, and full-time workers were putting in two hours longer a week at work.

Over the same period Labor also slashed corporate tax by 16 per cent from 49 per cent to 33 per cent. This meant it had to hold down government spending and make cuts.

His government forced through privatisation—including of Qantas and the Commonwealth Bank—and tax cuts for the rich.

Hawke’s record on other issues like foreign policy and Aboriginal rights was no better. In the lead up to his election, Hawke had promised Aboriginal people national land rights legislation, but backed down rather than challenge the mining companies and the Burke Labor government in Western Australia in 1984.

Bob Hawke attended the Barunga festival in the Northern Territory in June 1988 and promised a treaty with Aboriginal people by 1990. But that promise was discarded as quickly as the promise for national land rights.

Late in his life he was a strident advocate for establishing an international nuclear waste dump on Aboriginal land “to solve Indigenous poverty”.

Hawke was also a loyal supporter of US power, offering regular briefings to the US embassy on his Labor colleagues during the period of the Whitlam government. He was also stridently pro-Israel, even calling for the use of nuclear weapons in the event of war with Arab governments.

Bob Hawke took Australia into the First Gulf War and the invasion of Iraq alongside the US in 1990. He bragged about his personal relationship with George Bush Snr and his role in getting Canada to also commit to the war.

The Labor Party has always sought to work within the system. When capitalism is booming, it is sometimes prepared to offer reforms to improve people’s lives. But when capitalism faces crisis, it ultimately sides with the bosses and imposes cuts in order to maintain corporate profits and nurse the system back to health.

This means that Labor governments end up attacking their own working class supporters.

For six weeks in May and June 1988, workers in the Department of Social Security (DSS) in Sydney fought against the Hawke government’s proposal to slash nearly 1200 jobs from the Department nationally.

The Hawke government sided more firmly with capitalism than even the Labor governments that had come before it.

Accepting the needs of capitalism meant abandoning many of the ideas Labor had once been associated with—from public ownership of assets to defence of the welfare state and increased government spending on services.

By the 1987 election, working class discontent with the Hawke government was clear. Labor lost votes in its inner city heartland and in blue collar suburbs in Sydney and Melbourne, but survived the election due to chaos within the conservative parties. The following year Labor was savaged at by-elections in a series of safe Labor seats.

Hawke promised that the pain of the Accord would make workers better off in the long run by creating jobs and increasing the social wage. But after eight years of sacrifice workers were hit with another major recession beginning in 1990. Unemployment reached 11.25 per cent, and didn’t drop below 10 per cent until the middle of 1994.

By the time Hawke was removed as Prime Minister in 1991, his approval rating was down to 27 per cent.

The scale of the anger at Labor became obvious at the 1996 election, when the party was finally thrown out of office after 13 years in power.

Labor Senator Nick Sherry recalled that during the 1996 election mentioning neo-liberal buzzwords like “productivity” and “efficiency” around workers, was, “a good way to end your life”.

Hawke’s loyalty to capitalism never dimmed. As recently as 2014, as the union movement and community groups prepared to fight Tony Abbott, Hawke (and Keating) shamefully urged the Abbott Liberal government to slash spending and speedily repair the budget, boasting that they had made cuts worth $30 billion in 1986.

The unions held gatherings to celebrate Hawke on the eve of the election. But Hawke spent his life upholding capitalism and holding back workers struggle, even attempting to break militant unions.

The Hawke government shows just how much Labor is committed to running capitalism. Bill Shorten had already promised to work “co-operatively and constructively with business”. Shorten was suggesting holding a summit of business and unions after the election—not an actual Accord summit—but something similar.

Hawke’s endorsement of Shorten said that his background as union leader would be an asset, and that it would give him, “the experience to achieve consensus with business, unions and community-based organisations”. Anthony Albanese has also been trying to wrap himself in the legacy of Bob Hawke.

The power to change the system does not lie in parliament. It still lies with the workers who walked off the job when Whitlam was sacked and with the builder’s labourers and the unionists who fought against de-registration of the BLF.

In the 1980s, handfuls of socialists opposed Hawke’s Accord and the enterprise bargaining system that it led to. Now tens of thousands of workers understand that the system is broken.

“Voting Labor” was never going to be enough to challenge the inequality that is part and parcel of the capitalist system.

Over the next period we need to build socialist organisation and fan the flames of every bit of struggle—strikes, rallies, demonstrations—to fight for a society that puts human need before the profits of the bosses.