Billions in tax rorts for the rich still untouched 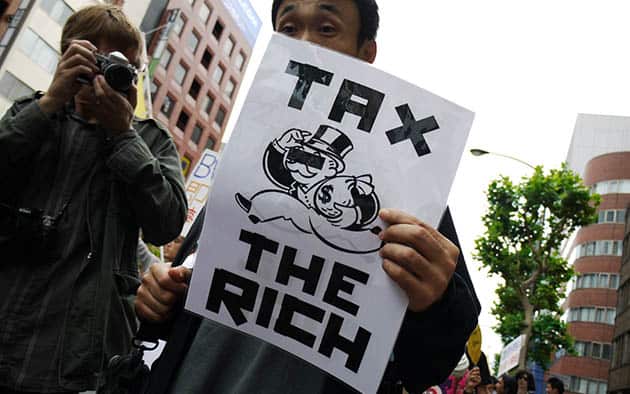 The 2016 Budget robs the poor to pay the rich. Its cuts to social welfare and other government payments and programs all had one target in mind—to fund tax cuts for big business. The handouts to business will cost $48 billion over ten years.

Many contributions to superannuation funds are taxed at 15 per cent, saving those on the top marginal tax rate 32 per cent in tax. Most superannuation payments to retirees are tax free, meaning someone like former NAB bank boss Don Argus with a family super fund balance of $15 million pays no tax on his “pension” of say $500,000 a year. These superannuation concessions cost about $30 billion a year, and about $12 billion goes to the top 10 per cent of income earners.

Negative gearing just means that the costs associated with a rental property (mainly but not limited to interest on the loan) are greater than the rent itself. That loss can then be offset against other income, such as salary and wages, reducing tax payable. The losses claimed total over $5 billion a year and 50 per cent are claimed by people in the top 10 per cent of income earners even after including the “loss” itself.

Why would you negatively gear? The main reason is because when you sell the property a few years down the track, only half the capital gain is taxed. When former Treasurer Peter Costello changed the law to implement this Capital Gains Tax (CGT) discount there was an explosion in negative gearing to take advantage of it. That discount forgoes about $6.15 billion in revenue.

Neither major party will get rid of these tax reductions for the rich in full because they both accept the idea that what is good for business and the rich is good for the rest of us.

Labor is proposing changes to negative gearing and the CGT discount which would recoup about one eighth of their cost. The Liberals have gone a little further than Labor on fiddling with superannuation. Their caps on contributions and other changes will claw back about $1.5 billion of the almost $12 billion going to the top 10 per cent annually.

Abolishing the CGT discount, the superannuation concessions and quarantining negative gearing losses to rental income would raise an extra $40 billion a year that could be spent on public transport, housing, health and education.

Despite its tax cuts for business and high income earners, the budget papers show that as a percentage of gross domestic product the tax take will actually increase slightly.

Guess who will be paying? You and me through bracket creep (when your pay increases lift you into the next, higher, tax bracket or increases your average tax rate in the same bracket).

Another very small part of the extra tax will come from increasing the excise on smokers, people who are overwhelmingly less well off.

Another small part will come from cracking down on tax avoidance, evidently. The government says this will raise $3.9 billion over four years. The much trumpeted Diverted Profits Tax (the “Google tax”) will raise $100 million a year. This is chickenfeed in terms of total Commonwealth revenue of over $350 billion a year.

So where is the other $3.8 billion coming from? Maybe it is coming from increasing the staffing levels in the Tax Office by 1000, partially offsetting the damage done by getting rid of 4400 tax officers already. If those workers were still in the ATO their energy and expertise could have lessened the revenue drain tax avoidance imposes.

The ATO’s Corporate Tax Transparency Report shows that of the top 1859 big businesses, 36 per cent paid no income tax whatsoever. This was on gross (untaxed) revenue of $404 billion among public companies and perhaps another $50 billion for private companies.

A small tax on that gross income of say 3 per cent would raise about $13 billion. We could also impose a similar rule on individuals to catch the 56 millionaires with gross income totalling $129 million who managed to reduce their tax to zero because of deductions like the $47 million they spent on tax advice.

Instead of cutting the taxes on the top income earners on corporations we could increase them.

None of this is rocket science. They are just some examples of what we could do to tax the rich to fund programs in health, education, climate change, public transport, domestic violence, homelessness and lifting 2.5 million Australians, including 603,000 kids, out of poverty.