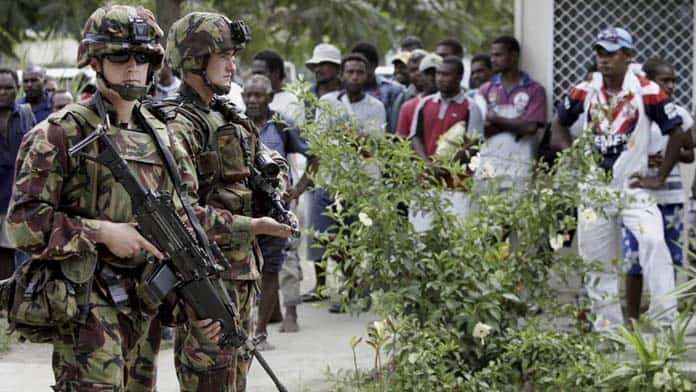 The Australian government has rushed troops, AFP riot police and a navy patrol boat to the Solomon Islands within a day of political protests there, which turned into rioting.

Australia sees itself as the police force of the south-west Pacific, maintaining “security and stability” in the region. Its key concern is to keep out rival powers such as China, and ensure Australian dominance there.

That the Cabinet’s National Security Committee thinks it is vital to intervene in a country of only 725,000 people, 2100km from Brisbane, speaks volumes about what the Australian ruling class think is vital to its strategic interests.

It underlines that, contrary to what many on the Left argue, Australia already has an “independent foreign policy”.

That foreign policy is outlined in the policy documents of the government-funded, right-wing defence think-tank, the Australian Strategic Policy Institute, which argued in the early 2000s for deepening Australian military involvement in South Pacific nations which Australia deemed “failed states”.

Australia is the regional sub-imperial power which flexes its muscles the minute the ruling class of a Pacific nation is threatened by political protest.

In effect, Australia is the “gendarme of reaction” in the south west Pacific. Whenever the class struggle explodes in Pacific nations and threatens a corrupt local ruling class, Australia is ready to put down rebellion.

It did so in Tonga in November 2006, when the new corrupt king was threatened by a democracy movement which led to rioting in the capital, Nuku’alofa.

Australia makes money from the Solomons but the strategic imperative is much more important.

Prime Minister Scott Morrison says the latest intervention was “requested” by the Solomons Island Prime Minister Manasseh Sogavare, under the terms of a security treaty signed in August 2017.

James Batley, a former Australian High Commissioner to the Solomons, said on ABC radio that Australian intervention was the “right thing to do and an obligation because of the security treaty”.

He failed to mention that it was a treaty foisted on the Solomons, after years of Australian control of the country from July 2003 to June 2017, for this exact purpose.

The intervention in 2003—the Regional Assistance Mission to Solomon Islands (RAMSI)—cost Australia more than $2.6 billion over a decade.

Australia was and is willing to pay a price for the strategic denial of any rival country being in the region, which it sees as its backyard.

Australia chose to intervene in the Solomons in 2003, a full three years after a debilitating coup, in order to forestall Indonesia’s offer of sending peace-keeping troops there.

In 2021, Australia is moving quickly to forestall any offer from China to the Solomons.

China has announced it will spend $825 million on the formerly Australian-owned Gold Ridge gold mine and infrastructure for the Solomons, and is increasing its influence.

Sogavare overturned 36 years of Solomons Island support for Taiwan in 2019 by switching its support to China.

This has become a focus for inter-ethnic hostility between those from the island of Malaita and the Guale people on the island of Guadalcanal, the location of the capital, Honaira.

Malaita’s Premier, Daniel Suidani, has criticised the central government’s switch to China and, according to the New York Times: “Continues to maintain a relationship with and receive support from Taiwan.”

Riots in 2006 led to the election of Sogavare as prime minister, who was then a relatively cleanskin politician. Now in his fourth term, he himself has become mired in corruption.

There were riots in the Solomons against Sogavare becoming prime minister again in April 2019.

It’s a rich political irony that Sogavare, who was a critic of RAMSI, now invokes a treaty to call on Australian military and police to shore up his position.

Sogavare’s evolution from cleanskin to corruption shows that Guale people cannot trust politicians from any island group purely based on their background.

Guale, Malaitans, Chinese and all minorities need to forge a new unity against all the parasites at the top of Solomons society.

Australian troops will not allow that process of unity to happen. Australia will continue to use divide-and-rule tactics and the cantonisation of islanders from different backgrounds.

The future of the Solomons does not have to be one of colonial control. There is a small organised working class on the waterfront and in the plantations, health sector, schools and public service that brings together people from different islands.

Its resistance to neo-liberal policies and ethnic rivalry is the key to curbing the Solomons’ descent into hell.

They will need the solidarity of Australian workers when Morrison’s “humanitarian intervention” goes pear-shaped, as it is likely to do.

Billions wasted on weapons—stop the march to war on China

The Morrison government remains stuck behind in the polls and is relentlessly trying to take us into a khaki election.

Australia’s own imperialism behind hysteria over Solomons-China deal

Just over 80 years ago Prime Minister John Curtin made a dramatic declaration shifting Australia’s allegiance from Britain to the US. Miro Sandev examines the motives