As Morrison backs fossil fuels, is the world finally acting on climate? 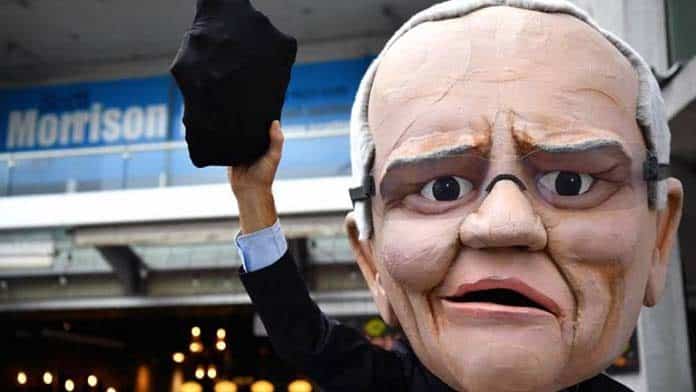 Even right-wing UK Prime Minister Boris Johnson demanded “bold action” from the Australian government in a phone call between the leaders.

To his embarrassment, Morrison was refused an invitation to speak at Johnson’s climate ambition summit in December, with the 50 spots reserved for countries prepared to announce “ambitious” new plans for cutting carbon emissions.

With his pitiful reduction target of 26 per cent by 2030, it is little wonder that Morrison was not offered a seat at the table. He was alongside climate criminals like Russia, Saudi Arabia and Brazil in being excluded.

But while Australia is increasingly isolated, the rest of the world is still far from reducing emissions to the extent needed to prevent catastrophic climate change.

Current pledges and targets would still see global temperatures rise by 2.6 degrees by the end of the century, according to the UN Emissions Gap report, and many countries are not even meeting their targets.

Even between 2010 and 2019, global emissions rose by almost 10 per cent. Global temperatures have already risen by just over 1 degree. And the trend is accelerating.

The 2020 Production Gap report, compiled by leading research institutions and the UN Environment Programme, shows that the world is nowhere near on track to meeting the target set at the Paris climate talks five years ago, which aimed to limit warming to 1.5 degrees above the pre-industrial average.

“To follow a 1.5°C-consistent pathway,” it says, “the world will need to decrease fossil fuel production by roughly 6 per cent per year between 2020 and 2030. Countries are instead planning and projecting an average annual increase of 2 per cent, which by 2030 would result in more than double the production consistent with the 1.5°C limit.”

Much has been made of the fact that global emissions fell by around 7 per cent during 2020 as a result of the pandemic, when shutdowns saw reduced travel, lower industrial activity and lower electricity generation. But a temporary reduction means little. It translates to a mere 0.01 degree reduction of global warming by 2050.

And the dip will be more than offset by the response of governments around the world to the pandemic-induced recession, which has been to ratchet up investment in fossil fuels, locking in decades worth of emissions.

Morrison’s “gas-fired recovery”, handing millions to gas companies and projects, while renewable energy was almost entirely overlooked, is consistent with the global trend.

The Production Gap report found that the wealthy G20 governments have committed around $300 billion in COVID-19-related funding to fossil fuel production and consumption to date, compared to $195 billion to clean energy. This is despite the fact that, in order to meet the Paris target, experts say that global coal, oil, and gas production must fall by 11, 4, and 3 per cent respectively every year between 2020 and 2030.

Much hope has been pinned on the election of Joe Biden bringing the US “back into the fold” after Trump withdrew from the Paris Agreement. Biden has signaled that he wants the US to rejoin and has committed to holding a US climate summit within his first 100 days of office.

But he is not willing to challenge the fossil fuel industry, commenting that, “we’re not getting rid of fossil fuels for a long time”.

Some of Biden’s biggest election backers were fossil fuel corporations. In September he joined a fundraiser organised by Andrew Goldman, co-founder of fracking firm Western LNG. Goldman is a former Biden adviser and was a director of finance for his 2008 campaign.

Biden has now appointed Democratic Congressman Cedric Richmond, friend of the fossil fuel industry, as head of the White House Office of Public Engagement, where he will “serve as a liaison with the business community and climate change activists.” In his ten years in Congress, Richmond has pocketed over $452,000 in donations from oil and gas firms.

Biden has also long been a supporter of the fracking industry. And while he has now suggested he may ban fracking on federal land, 90 per cent of it takes place elsewhere, so this would have little impact.

He also refuses to support the Green New Deal, a program conceived of by climate activists and scientists to deal with unemployment and climate change simultaneously, supported by left-wing sections of the Democrats. Instead he has offered a series of far less ambitious proposals to encourage jobs in renewable energy and new technologies like electric cars.

Only mass movements capable of confronting the destructive, profit-driven logic of capitalism will be able to win the action we need to stop climate change in its tracks.