A Greens-Labor coalition? Parliament, elections and running the system 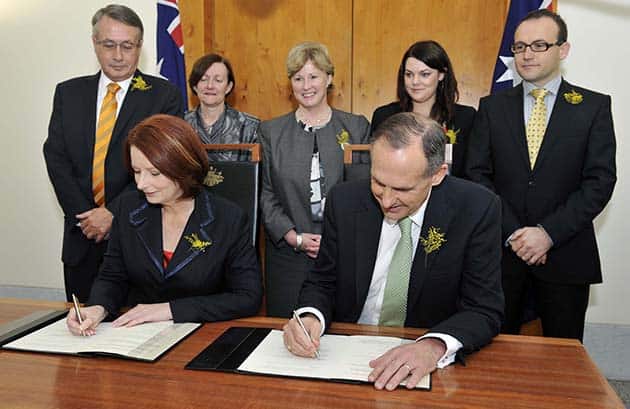 The Greens are right to side with Labor above the Liberals, but taking part in coalition governments is no way to win meaningful change, argues James Supple

When The Greens began speculating about the prospect of another Greens-Labor government, a war of words resulted. Greens MP Adam Bandt told Q&A that, in the event of a hung parliament “I would like to see Greens working with Labor”. Bill Shorten was so desperate to deny the possibility that he signed a pledge from Murdoch’s Daily Telegraph not to deal with The Greens to form government.

The Labor Party wants to distance itself from the more left-wing policies of The Greens and also from the period of the Gillard Labor government and the carbon tax in particular, since it was deeply unpopular.

But The Greens are right to declare their preference for having Labor in power. In his contribution to the new book How to vote progressive, Bandt acknowledges that most progressive Greens voters want the party to side with Labor against the Liberals. This remains controversial within the party.

Rightly, Bandt also points out that, “there is something significant about Labor that doesn’t apply to the Liberals. Many in Labor consider it a party of the left and there are strong connections to unions and community groups.”

The Liberals are the open party of Australian business. While Labor rules for the rich when in power, their working class base distinguishes them from the Liberals. Becoming a left alternative to Labor means appealing to that base.

But The Greens’ approach is increasingly about electoral gradualism. Leader Richard Di Natale says the party’s aim is to “see many Greens in the Lower House of Parliament” and hit 20 per cent of the vote within a decade.

The Greens are a chance this election to expand further into the lower house by taking seats such as Batman and Wills in Melbourne, and Grayndler in Sydney.

Chasing Liberal or National voters means watering down policies like supporting taxes on the rich. The Greens have already junked support for an inheritance tax.

Labor has lead a campaign declaring there is a “Greens-Liberal deal”, arguing that a vote for The Greens risks letting a Liberal government back in.

The confusion is allowed to persist because The Greens have not made clear an intention to preference Labor above the Coalition in every seat and in the Senate.

Di Natale has raised the practice of issuing “open tickets” on election day, meaning not clearly preferencing either major party.

Former Greens leader Bob Brown also entered the debate to make a point of backing open tickets across the board, saying Labor must “work for their vote”.

Preferencing decision-making is decided on a seat-by-seat basis in The Greens. But if they recognised they cannot afford to appear neutral about a Liberal or Labor victory, a national decision could be made.

All the discussion about a Labor-Greens coalition assumes the way to make change is by The Greens’ gradually increasing their vote and entering coalition governments. This demonstrates how electoralism is pulling The Greens in a conservative direction.

Adam Bandt has cited the experience of the German Greens, governing in coalition with the equivalent of the Labor Party, as delivering great strides on climate change. But this entailed abhorrent compromises.

The German Green Foreign Minister presided over the first German military operation abroad since the Second World War when the country joined the NATO bombing of Serbia in 1999. This so-called “humanitarian intervention” involved the mass expulsion and ethnic cleansing of refugees and killed 1500 civilians.

The German Greens even supported a major neo-liberal attack on pensions and unemployment benefits known as Agenda 2010.

The price of participating in government is concessions that would make The Greens resemble the major parties, or go the way of the Democrats after they passed the GST.

So while Adam Bandt genuflects to “strong social movements working together with Parliamentarians” in his book chapter, he doesn’t see any need for The Greens to be building such movements. Rather his focus is on elections and the “pressure points…in the numerous Greens/Labor marginal seats that exist around the country”.

So activists should put their time and energy into electioneering, a deprioritise social movement activity. Bandt argues it’s the only option, asking, “what is the alternative strategy to get the climate action we need in the time the science demands?”

The alternative is seeing the movements outside parliament as the key to forcing change, not the deals that can be extracted on the basis of The Greens’ parliamentary numbers.

It was the demonstrations and public anger that sank Tony Abbott’s first budget, and eventually meant he was ousted as Prime Minister. Similarly it is consistent campaigning for refugee rights that has begun to shift public opinion. And it was not action in parliament that won the overwhelming public support that now exists for equal marriage.

Parliamentary activity and running in elections should be subordinate to championing and building social movements, not a substitute for them.

Greens MPs have drawn exactly the wrong lessons from their period in alliance with the Gillard Labor government. According to Adam Bandt this was “one of the most productive periods” in Australian politics.

Their Agreement itself only committed The Greens to keeping the government in power through supporting confidence and supply motions. In return it committed the government to a climate change committee, a debate on the war in Afghanistan and an investigation into spending on dental care.

But The Greens were drawn to the right, as their desire to prove that they could be a reliable parliamentary partner saw them defending an unpopular and indefensible Labor government.

They constantly talked up the “achievements” of the Agreement and what The Greens extracted from Labor.

The focus was now on working with Labor to extract miniscule reforms that Labor would find acceptable, not on fighting for The Greens’ principles against the parliamentary consensus.

The Greens attached themselves to a climate change committee to negotiate a carbon tax. Yet the limits of such a committee were obvious; it was only ever going to adopt something acceptable to Labor and big business.

The carbon tax that resulted was not only useless for reducing carbon emissions but deeply unpopular too. Even as it was launched, Greens deputy leader Christine Milne admitted that the $23 a tonne carbon price “isn’t high enough to drive the revolution in renewables that we need”. Yet The Greens were left trying to sell the policy as their key achievement.

As Labor’s popularity plummeted, The Greens were pulled down by association.

In entering coalition governments, The Greens risk repeating the experience in Tasmania, where they have now supported three minority governments.

Most recently, The Greens had two ministers in the cabinet of Labor Premier Lara Giddings from 2011 until early 2014.

The consequences became clear as that government moved to implement austerity with $1.4 billion in spending cuts including 1700 job cuts in the public service, $100 million in cuts to health, $190 million in cuts to education and an increase in public housing rent.

The Greens supported the budget, with Greens leader Nick McKim defending it by saying, “Just as the Greens supported previous Labor and Liberal minority governments when tough remedial budget action was required, we have rolled up our sleeves to take on a similar responsible role once again”.

As Education Minister, Nick McKim was responsible for implementing the closure of 20 government schools. The government backed down after a union and community backlash, forcing the Education department to find $24 million in savings elsewhere instead, meaning a slow trickle of job and program cuts. Bizarrely, McKim was rewarded with a move to the Senate, where he now sits amongst other things as the Greens spokesperson for schools!

The Greens had been in a similar situation before. Between 1989 and 1991 they supported their first Labor government in Tasmania.

The Greens gained environmental concessions from an Accord with the government but as a result were pressured into supporting Labor’s budget. This included spending cuts and school closures to deal with Labor’s claims of a budget “black hole”.

Labor directly breached the Accord by raising the wood chipping quota in October 1990. But The Greens continued to support the government until the end of 1991 when they moved a no confidence motion over forests policy. They belatedly moved a bill to save some of the schools from closure, but did not try to bring down the government over the damage to the schools system.

The Greens entered a less formal arrangement supporting a Liberal government between 1996 and 1998. Christine Milne, who was leader of the Tasmanian Greens at the time, has claimed this period as a success for achieving gun law reform, LGBTI law reform and an apology to Tasmania’s Stolen Generations. But it meant again passing a budget that contained public sector cuts at the same time as reducing land tax and stamp duty for the rich.

The Greens face a major question about their direction—be pulled into the parliamentary mainstream or continue to oppose the consensus around neo-liberalism and refugee bashing that has set them apart from it.