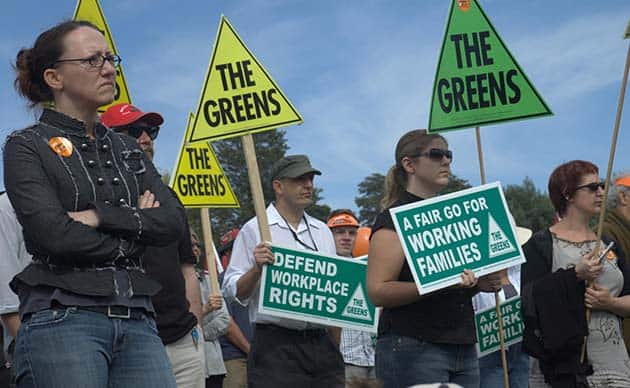 The Greens have hit another fork in the road, and taken the wrong turn. Their decision to prioritise Senate reform, despite the risk of bringing back the anti-union Australian Building and Construction Commission (ABCC) has done serious damage to their credibility with unionists.

The choice between being a party driven by electoralism and “pragmatism”, or building a clearly left-wing party, is starker than ever.

Di Natale is moving the party to the right, with a greater willingness to work with the Liberals to get changes through parliament.

The Greens have built their support as a left of Labor alternative, by taking a stand on refugee rights, against the Iraq war, for same-sex marriage, climate action, and funding for education and health.

They win far more voters from Labor than from the Liberals: in elections where the Greens vote has increased significantly (in 2001, 2004 and 2010), between 30 and 40 per cent of their voters had supported Labor the previous election, compared to around 10 per cent who had voted Liberal.

However most Greens members do not see reaching out to unionists and the wider working class as a strategic priority. Despite the decline in Labor’s vote, it still has the support of most union activists and the more politicised sections of the working class. Former Greens leader Bob Brown often said that The Greens’ aim was not to simply “keep the bastards honest” through deals with the major parties but to “replace the bastards”.

But The Greens can only achieve this through winning over the mass working class support base that remains with Labor. Their decision to prioritise Senate reform over union rights will make this much harder.

The party still goes out of its way to present itself as “above politics” and pitch for “blue-green” votes of disgruntled Liberal or Nationals voters.

Founding leader Bob Brown described the Greens as “more Labor than Labor and more Liberal than the Liberals”, while current leader Richard Di Natale says he’s “not an ideologue” and wants The Greens to represent all “progressive mainstream Australian voters”.

When Christine Milne took over the leadership from Bob Brown, she appealed to “progressive” business and the rural community as the next constituencies for The Greens.

There has not been a similar emphasis on winning working class votes. Unions are treated as just another interest group, and the party does not accept union affiliations as Labor does.

But the working class is a critical base of support in building a mass left-wing party. Class remains the key divide in society. The Panama Papers remind us that class is all too real: there are those in society who can hide their wealth from tax in offshore islands, and there are the rest of us.

Workers have a direct material interest in supporting the progressive reforms The Greens stand for, such as closing superannuation tax loopholes for the rich, or adding dental care to Medicare.

And they have the power to fight for them in a way no other social group does. Union power is vital to the strength of any social movement. The nurses’ union was at the forefront of defending Medicare from Tony Abbott’s co-payment plan. And it was the CFMEU that put the best case to defend the idea of a mining super-profits tax against opposition from the mining companies.

And whilst it is not automatic that working class people support refugee rights and action on climate change, it is in their interests to do so.

There is a proud tradition in Australia of unions fighting racism, from boycotts on apartheid South Africa, to walking off the job for Land Rights. Unions have played a key role in the Gay Liberation movement, and also in protecting the environment from major developments.

On the other hand, chasing “progressive business” will put pressure on The Greens to water down their policies. Sections of business may support social or environmental reforms such as same-sex marriage, but there is no section of business that supports higher penalty rates, the right to strike or higher corporate tax.

The Greens have built relationships with left-wing unions like the CFMEU construction division who have given substantial donations to The Greens in the past, but are now harshly critical. Other left officials like Peter Simpson from the ETU feel similarly burnt (see opposite page).

Despite this, the ETU in Victoria are continuing to support Adam Bandt in the lower house seat of Melbourne, citing the need for a force in parliament to the left of Labor, who retained many of Howard’s anti-union laws.

Many unionists are deeply disillusioned with Labor and looking for alternatives. The Greens’ future will be determined by whether they can recognise the importance of unions and the working class, and work to repair the damage that’s been done.