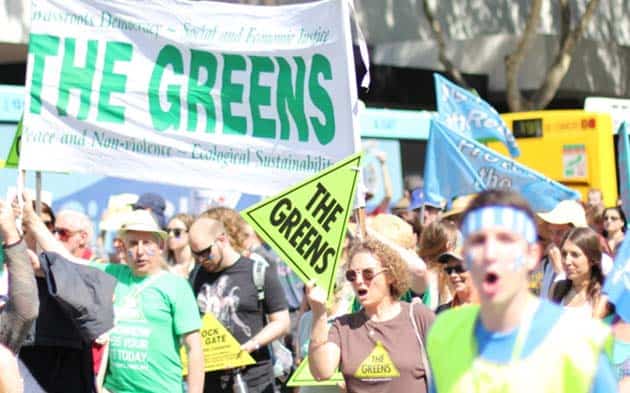 In January, Solidarity welcomed the declaration of Left Renewal—the newly formed left tendency within The Greens. Since then, Left Renewal has held successful public launches in Sydney and Canberra, to showcase its vision for The Greens and begin a badly-needed discussion.

Over a hundred people packed into the Sydney Left Renewal meeting at Redfern’s Settlement hall to discuss the future of The Greens and the implications of the right-ward shift in the party for social movements and the left more broadly.

One of the speakers, Chris, responded to media attacks from Greens leader Richard di Natale that Left Renewal members should “consider finding a new political home,” telling the meeting that that, “socialist, anarchists and radicals had always been part of the party”.

That view has also been strongly put by other Left Renewal members. Tamara Ryan told Sydney Criminal Lawyers that, “We go back to the infamous Green Bans that inspired our party founders, where ecological and social justice were fought for in the streets and on work sites. We want to go back to and strengthen those roots.”

Another speaker, Holly, argued strongly that The Greens need to be anti-capitalist if they are going to capture the radical mood that has seen young people flock to support socialist Democrat Bernie Sanders in the US, and a resurgent left movement backing Jeremy Corbyn in the UK Labour Party.

But, just days after the launch, the right of the party escalated its attack on the left.

Former leader Bob Brown hit a disgraceful new low calling Lee Rhiannon the, “Tony Abbott of The Greens when it comes to political white-anting”. Brown’s brazen attack is astonishing given the white-anting he and another former leader, Christine Milne, happily carry out for Richard Di Natale.

At the same time, behind the scenes the right continues to gain ground. The Greens’ January National Council meeting broke with protocol to hold an “in camera” session and pass a motion against factions—a blatant attempt to intimidate Left Renewal.

Then at the February NSW State Delegates’ Council, despite widespread concern about Dawn Walker breaching party rules and accessing official membership lists to contact Greens members, the left was rolled by a single vote when it moved to overturn her pre-selection win. Walker will now join Jeremy Buckingham and Justin Field as part of the right Greens bloc in the NSW parliament.

The left lost another opportunity at the SDC meeting, when, under pressure from the right for a consensus resolution, the meeting backed away from a motion explicitly condemning Bob Brown’s attack on Lee Rhiannon.

Left Renewal has come under a lot of pressure for bringing the fight against the rise of the conservatives into the open. But the determined action of the right to consolidate their hold on the party shows why the formation of the faction has been so necessary to defend party democracy.

The new group has its work cut out to reach out to rank-and-file Greens members and supporters, and build a base in the party. There are promising signs that the wider left in the party in NSW is also recognising the significance of the stand taken by Left Renewal to defend the party’s principles.

There are good opportunities in the period ahead. Building a solid Greens contingent for the Palm Sunday refugee rally can be a good step towards mobilising The Greens as an activist party, and organising Greens members to fight the racist right—be that Turnbull, Hanson, or Trump.

This outward-looking focus allows space to engage wider layers of Greens members in the debate over what sort of party The Greens should be.

The “Standing Up For Communities: No Bans, No Hate” meeting with Lee Rhiannon and Mehreen Faruqi at Granville on Sunday 5 March, is another opportunity to mobilise Greens members and tap the growing concerns about Trump and Turnbull’s racism and Islamophobia.

There are many other opportunities to respond politically to the conservatism of The Greens leadership. In a couple of weeks, 937 people signed a petition initiated by Solidarity condemning Di Natale’s characterisation of calls by Aboriginal activists to oppose Australia Day and burn the Australian flag as “violent”.

Similar public responses are needed to Bob Brown’s attacks on Lee Rhiannon, and the National Council’s “anti-faction” resolution. Combined with efforts to mobilise members and supporters, such responses can both expose more clearly what is at stake in the fight against the right, and what a fighting left Greens could look like. The wider Left can only gain from that.