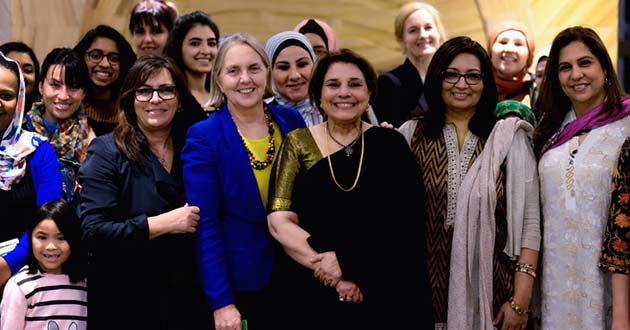 Another polarising pre-selection contest has begun in the NSW Greens, over the party’s Senate ticket for the next federal election. NSW upper house MP Mehreen Faruqi is standing against sitting Senator Lee Rhiannon, who is up for re-election.

The federal party room’s attack on Lee Rhiannon in June, excluding her from party room meetings, has turned her into an important symbol for members in NSW.

She is the most prominent representative of the left-wing grouping that has dominated the NSW Greens, often at odds with party leaders like Richard Di Natale.

Greens members have rallied around her in defence of grassroots democracy in the party and the ability to bind the way MPs vote, as well as in opposition to Di Natale’s parliamentary pragmatism that saw the party flirt with supporting Turnbull’s Gonski 2.0 schools package.

In the statement announcing her decision to seek pre-selection, Rhiannon defended a vision of The Greens as “a party of protest that supports social movements”, and positions itself firmly as wanting to see the defeat of the Turnbull government and its war on workers.

In contrast to the right of the party who favour trying to win small business and Liberal votes, she pointed to the importance of class issues like housing, Medicare, unions and the right to strike and the way, “thousands of people’s hopes and dreams have been shattered by entrenched inequality”.

Di Natale and the party’s right want to see Lee Rhiannon pushed out of the Senate. They have waged a long-running campaign against Rhiannon and the NSW Greens, who are seen as an obstacle to dragging the party to the right.

It is disappointing that Mehreen Faruqi, someone who has a good record of standing up to racism and defending grassroots democracy in the NSW Greens, has chosen to stand against her.

Faruqi has been encouraged to run by other MPs in the NSW Greens who have little sympathy with Lee Rhiannon’s more left-wing approach. She will have the backing of the party’s right in NSW.

A defeat for Lee Rhiannon in the pre-selection would be a serious blow to the left in The Greens. While the federal party room’s attack on her backfired, boosting her personal standing, she is by no means assured of winning. The left has lost the last two pre-selections in NSW, held within a few months of each other last year. On both occasions, the pre-selection was won by explicit candidates of the right.

This time the right is backing Faruqi as a “compromise candidate” who will draw votes from both more left-wing and more moderate Greens members. If the right can marshal the support it mustered behind candidates in the last two NSW pre-selections, as well as confuse enough left-wing Greens members into voting for Faruqi, she could win.

What kind of party?

At stake is not simply who sits in the Senate. Greens leader Richard Di Natale’s negotiations with Malcolm Turnbull over Gonski 2.0 almost led to disaster for the party. Supporting the plan would have alienated The Greens from their many supporters among teachers and all those who want to see The Greens fight Turnbull.

The drift towards focusing on deals in parliament, or “delivering outcomes” as Di Natale puts it, risks the kind of disaster that befell the Democrats when they supported John Howard’s GST.

The left cannot afford to be complacent. A much greater effort to campaign amongst the membership is needed than in the past.

There should have been meetings called around Gonski 2.0 and the party room’s attack on Lee, defending the importance of working with teachers and education unions.

Her pre-selection campaign is a chance for public meetings setting out an alternative vision for an explicitly left-wing party. In the era of Jeremy Corbyn and Bernie Sanders, The Greens need to fight against the political mainstream and put forward radical left-wing solutions to inequality and neo-liberalism. This can attract not just existing Greens members but many supporters as well.

The campaign will need to be explicit about the issues at stake. Every Greens member and supporter needs to understand the politics behind divisions in the party.

Events are coming to a crunch for the left in the NSW Greens. There will be another tightly contested pre-selection next year for candidates for the next NSW state election.

This will pit two sitting MPs, the left’s David Shoebridge and the right’s Jeremy Buckingham, against each other.

If Shoebridge loses he is unlikely to win re-election, removing the only Greens MP in the NSW parliament associated with the left. If both Lee Rhiannon and Shoebridge lose, the left will not have a single MP.

The left needs to get organised. The future of the party as a force for supporting struggles outside of parliament is at stake.