With independent MPs positioned to determine who forms the next government there has been all sorts of talk about the beginning of a different kind of politics in Canberra. But there is nothing progressive about a swing to the right that boosted the Liberal vote and produced a hung parliament that came within a few seats of making Tony Abbott prime minister.

The announcement that enough of them will back a Labor government comes as a relief. But as they have all maintained their right to vote however they wish issue by issue, they will remain kingmakers over the government’s agenda. 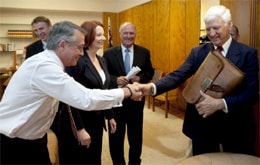 Some of them may have progressive views on some issues, like refugees. But Tony Windsor supported a Liberal minority government in NSW after 1991 for four years. Rob Oakshott has said he is, “probably more conservative in my economics than not and naturally leaning towards the Liberal Party normally”.

And then there is Bob Katter—a right-wing crazy who is a climate denier and was invited by Pauline Hanson to join One Nation because of his racist claims about migrants. His start in politics came as part of the notorious right-wing Joh Bjelke-Petersen government in Queensland.

There is nothing left wing about having a gaggle of ex-Nationals determining the formation of the new government. It is a travesty of democracy.

Some people think the hung parliament and the Greens’ balance of power in the Senate is the beginning of a break with the “two party system”, as if that is the main obstacle to pushing for radical change. But this hung parliament is no break with electoralism nor is it a break to the left. Working class interests are never well represented in parliament—but a far better outcome for this would have been a clear parliamentary majority for Labor and The Greens.

There is wide enthusiasm at the prospect of reforms to parliament procedures, but the independents’ list of proposed changes—question time, campaign finance, private members’ bills—have nothing to do with improving people’s lives.

Adam Bandt seems to think they will have a big impact. He told the Sunday Age that an increased role for private members bills, “will mean I could move legislation on areas important to me—like tackling climate change, ending mandatory detention and removing discrimination against same-sex marriage—and it would have to actually be dealt with”. But the same thing would happen to Bandt’s legislation as happens to Greens’ amendments. They are voted down, and no one ever hears about them.

Given the massive disillusionment with mainstream politics, it is tempting to think that a little tinkering could make the system “work for the people.” But independent MPs have had similar measures introduced before. Independents controlled the balance of power between 1991 and 1995 in NSW and after the 1999 election in Victoria.

In NSW they negotiated four-year terms, changed parliamentary procedures and introduced a bigger role for private members. But nobody could call the NSW parliament a model of democracy or one that delivers for ordinary people. NSW’s Labor government has left the state’s public services crippled and seen the influence of property developers on government run rampant. Victoria’s Labor government may not be quite as hopeless, but nor has the introduction of proportional representation in the upper house or fixed-term parliaments made it any more democratic.

Independent Rob Oakshott’s comments that “we are committed to the national interest [and] stable government” echo a key concern for a minority government. The Greens Senators have also continually stressed that they too want to be “responsible” and give the government a stable working arrangement.

But what does stability in “the national interest” mean? You can get an idea by looking at who else is concerned about it. The Australian Industry Group called the result, “a worrying outcome for business. It will potentially lead to instability, uncertainty and short-termism in policy development, all of which poses risks and challenges for the economy”. The Business Council of Australia said the challenge for the independents was, “to put national interest ahead of sectional interests,” and to support the big business “reform” agenda, which it spelled out in the Financial Review.

By “national interest” they mean the interests of the people that own and run the economy—the big corporations and their millionaire CEOs. There is not a single national interest—Australia, like all capitalist countries, is divided by class.

Working class people struggling to balance their household budgets, the unemployed, or those living on a pension have very different interests to the banks and mining bosses that make their profits from exploiting them.

Yet there is precious little talk of the social change we really need—abolishing the ABCC, funding renewable energy, money for teachers, schools and hospitals, or withdrawing troops from Afghanistan. But if the election has taught us anything it is that for real change we have to look to the parliament of the streets, not the one that sits in Canberra.

Seats saved—but where now for The Greens?

No mandate: Abbott can be beaten