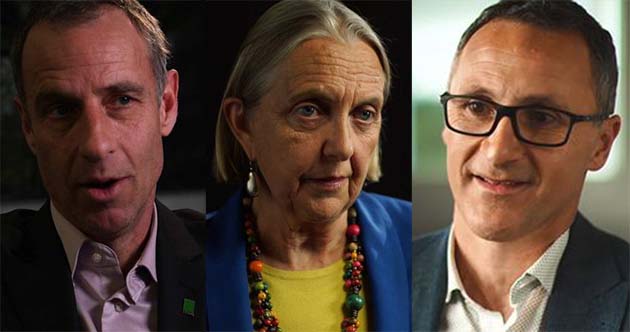 Four Corners on Monday night, pitched as a report on the crisis in the Australian Greens, was used by the right wing of the party to accelerate their open attacks on Lee Rhiannon and the Left in the NSW Greens. They are attempting to drive Lee out of the party and crush the Left.

Lee Rhiannon represents forces within the NSW Greens who are committed to the importance of social movements in driving change. She has provided important support to all manner of protest movements during her time as an MP.

Richard Di Natale has used his leadership of the federal party to try and consolidate The Greens as part of the political mainstream. In this vision, the primary function of The Greens is to use their positions in parliament to “deliver outcomes” through negotiations, even if this means openly collaborating with the Liberals on regressive legislation. Appeals to small business and ex-Liberal party voters are seen as an important way of building The Greens’ vote.

These competing visions were at logger heads during recent attempts by Di Natale to lead negotiations with Turnbull over his Gonski 2.0 schools funding package. Di Natale saw the negotiations as an opportunity to showcase The Greens’ parliamentary relevance.

But Gonski 2.0 had been rejected by teachers, unions and public education campaigners across the country as fundamentally unjust, worsening social inequality and cutting finding to public schools. NSW Greens policy opposed Gonski 2.0, and Rhiannon stood by this policy. According to Paddy Manning writing in August edition of The Monthly, many of The Greens’ MPs had serious doubts about Gonski, yet Rhiannon’s opposition was used as the excuse by the other Greens federal members of parliament to exclude her from Federal Party room.

After the NSW state delegates committee showed strong support for Rhiannon, she was conditionally invited back into the party room. But the fiery words from the right-wing party leaders on Four Corners makes it clear they are still out for blood and want Rhiannon gone.

Former Greens leader Bob Brown and current Tasmanian Senator Nick McKim were open and unapologetic about their mission to drive Lee Rhiannon out. McKim called the attacks on Lee “growing pains” that would lead to a more “professional” party. Brown said, “It’s the end of Lee’s reign, the end is nigh”.

McKim painted a ridiculous picture of the NSW Left as “puppet masters… treating their members like mushrooms—in the dark and fed bullshit”.

Lee Rhiannon is currently facing a preselection battle in NSW for the next Senate elections. Very sadly, NSW MP Mehreen Faruqi has decided to stand against her. Faruqi has a strong record of anti-racism and support for protests. But in this campaign, she will be backed by the right wingers looking to oust Rhiannon. With so much at stake, anything but a majority vote for Lee will be a win for the right.

On Four Corners, Richard Di Natale joined in with Four Corners presenter Louis Milligan’s attempts to dismiss the Left in The Greens as deluded idealists. Earlier in the program, Milligan scoffed at the anti-capitalist demands of the Left Renewal, saying, “Good luck with that”. Di Natale mocked Lee Rhiannon as someone who, “doesn’t believe in leaders”. Di Natale’s real problem is that the Greens Left in NSW have fought to keep leaders accountable, providing a barrier to his parliamentary wheeling and dealing.

The politics surrounding the resignation of Greens Senators Scott Ludlam and Larissa Waters featured prominently in Four Corners. Like Di Natale, Christine Milne used this to push the “professionalism” barrow, saying, “It again highlights why you need a really efficient, well-resourced national organisation. The other parties have that.”

The fact that senior Coalition MPs are now caught in the same dual citizenship scandal shows just how opportunistic Milne’s comment was. “Professional” was just another way of saying respectable.

Right-wing NSW MP Jeremy Buckingham was in full flight in Four Corners, painting Rhiannon and “her faction” as enemies of party democracy because some of his proposals had been opposed.

In reality, it is Buckingham that is contemptuous of party democracy. He refuses to be bound by democratically determined party policy when it doesn’t align with his conservative views. One example is his consistent support for Israel, in opposition to the NSW Greens’ support for the Boycott, Divestment and Sanctions campaign. In June, he issued an open letter calling for a “boycott” of the Parliamentary Liaison Committee elected by the NSW State Delegates Council, which functions to keep parliamentarians accountable to policy and rank and file members.

Given the success of the right in the two pre-selection battles over the past year, the future of the party as a radical force in NSW and Australian politics is at serious risk. The right has been better organised. On Four Corners, they have openly displayed their intentions to remove the NSW left, which they see as an obstacle to their ambition to take the party to the right, focused on being a player in parliamentary politics.

The statements from both Rhiannon and state MP David Shoebridge in response to Four Corners unfortunately were very defensive, emphasising the importance, and their commitment to, the grassroots democracy of the NSW Greens, but were silent on the political agenda driving Di Natale, Brown and Buckingham.

The key question is not just who is most committed to “party democracy”; it is rather, what kind of party should The Greens be? One that openly stands with social struggles, orients to the union movement and champions working class demands? Or one that seeks to have a role in managing the system, negotiating outcomes with either Liberal or Labor parties in government?

The coming pre-selection campaigns are a chance to fight for a vision of the Greens as a party of grass-roots campaigning and social transformation. The campaigns of Corbyn and Sanders, showed there is a real hunger across society for demands for union rights, re-nationalising services and industries, confronting racism and winning solutions to environmental crisis that also deliver social justice.