Electoralism no road to shifting Greens to the left 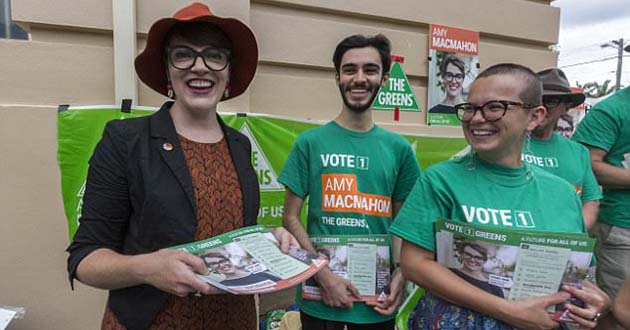 Greens members and supporters are understandably enthused at recent electoral successes in Brisbane and Melbourne. As Turnbull falls in the polls, the need for a party to the left of Labor to take up the fight for refugees and to change the laws that shackle the unions is more urgent than ever.

In November, The Greens won a seat in the Queensland election and significantly increased their vote in inner city seats such as South Brisbane.

Some in the party see this as a model for winning votes using radical arguments and policies.

But this was a wish list of demands concocted for the election. A left campaign needs to relate to existing campaigns and raise demands that can form the basis for community campaigning and mobilisation.

The Greens campaign ignored one of the central concerns of the election—the likelihood of an LNP/One Nation coalition. While Labor campaigned strongly to “put One Nation last”, The Greens’ campaign was deliberately silent on the threat.

The Greens missed the opportunity to make common cause with the union campaign against One Nation.

This decision could only have come from electoralist concerns that targeting One Nation would not win The Greens votes. Subordinating political principles and priorities in order to maximise your vote is one of the hallmarks of an electoralist politics that will drag the party to the right.

The Queensland campaign was actually a continuation of The Greens’ strategy of looking to win inner city seats, like Jenny Leong’s campaign in Newtown in Sydney and Adam Bandt’s in his seat of Melbourne.

This means an almost exclusively electoralist vision for the party. South Brisbane candidate Amy McMahon told a post-election meeting that their campaign was built around, “door-knocking teams going out every weekend over the course of a year”.

Between campaigning in state, federal and council elections, such an enormous mobilisation to get the vote out leaves little time for building activist campaigns and movements.

The other limitation of this strategy is that without a consistent focus on Labor’s working class base, The Greens’ reach does not extend beyond the inner cities into Labor heartlands.

While The Greens implicitly recognised that there is a difference between Labor and the Liberals by directing preferences to Labor, the Queensland Greens persistently positioned themselves as being hostile to the two “old parties”.

But this position, equating Labor with the LNP, alienates the unions and Labor’s base and makes The Greens seem indifferent to keeping the LNP and One Nation out.

The Greens may have raised the issue of re-nationalising the power industry—but it is the unions and workers that have both the interest and the power to use their industrial strength and their base in the community to fight privatisation—as their recent struggles have shown.

This strategy does nothing to reverse the party’s embrace of parliamentary compromise and its focus on one day forming a “stable, effective and progressive government”, as Victorian Greens leader Samantha Ratnam put it after winning the Northcote by-election in November.

This is also the ambition of Greens leader Richard Di Natale. On the night of the Northcote by-election he repeated his underwhelming goal of winning 25 seats in the next 25 years.

Richard Di Natale is leading the drive to pragmatic electoral politics nationally. In NSW it is Jeremy Buckingham. These are the forces that have declared war on the left in NSW—resulting in Lee Rhiannon’s defeat in the recent pre-selection ballot.

There is no point winning more seats if the party is going to be hide-bound by its electoralist ambitions.

To pretend that the left can go forward by focussing on winning seats while the right relentlessly takes control of the party will reduce the left to the role of the orchestra on the deck of the Titanic.

There is now an open fight for the soul and future of The Greens. In NSW, that fight is now focussed on David Shoebridge’s pre-selection battle with Jeremy Buckingham over a spot in the NSW upper house.

Di Natale’s trajectory is a dead end. That was graphically on display when he attempted to do the deal with Turnbull over support for Gonski 2.0, ignoring the strong views of Greens teachers and the education unions.

There needs to be an openly organised left faction in The Greens that systematically fights to mobilise the party for the struggles outside parliament: for the industrial days of action against Turnbull’s war on workers, the refugee rallies, climate action, and the fight against Islamophobia.

The party that is needed is not one primarily focussed on winning parliamentary seats. It needs to be focussed on building the struggles outside parliament to win change.