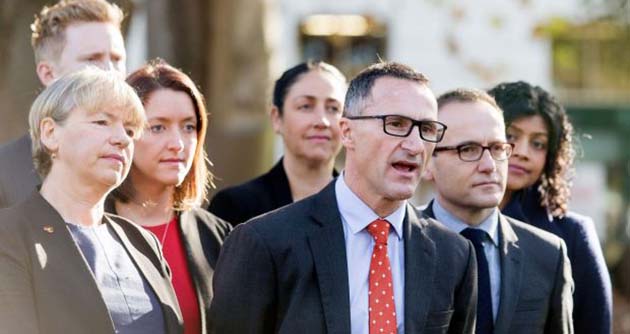 For the broad left nationally, those inside and outside of the Greens, the declaration of Left Renewal is a very welcome development. Its formation as a left pole has already pulled the debate in The Greens to the left, exposing the ongoing offensive by the Richard Di Natale-led right and their NSW allies, and has spurred the broader left in the NSW Greens to respond publicly.

Di Natale’s attack on Left Renewal and his failure to stand up to the Murdoch press over Invasion Day and burning the Australian flag is a very graphic indication of The Greens’ rightward drift.

The battle for the NSW Greens

The launch of Left Renewal has blown open the ongoing battle between left and right inside The Greens. The outcome of the struggle matters for politics in NSW and across the country. The Greens rose as an electoral home for those revolted by Labor’s embrace of neoliberalism during the Hawke/Keating years, and neoliberalism’s corollary, racist scapegoating. While Labor promoted markets in education, savagery to refugees, loyalty to the fossil fuel industry and ardent support for the War on Terror, The Greens took a principled stand, and won a section of Labor’s historic base. Representing this left-of-Labor sentiment has helped the whole left resist the rightward pull of mainstream politics.

But this left-of-Labor politics is only one side of The Greens. The leadership of Christine Milne and now Richard Di Natale has clearly revealed another fundamental element of Greens politics. This is the politics of the “progressive, pragmatic centre”—similar to the electoralist position taken by the now defunct Australian Democrats. Di Natale wants to move The Greens further in the direction of parliamentary pragmatism, using the party’s parliamentary numbers to cut deals with the government to “get outcomes”, such as his deal with Turnbull to support cuts to pensions.

Having initially attracted the “low hanging fruit” of disaffected Labor supporters, The Greens have turned away from the challenge of winning more of Labor’s working class voters (hence The Greens’ difficulty winning votes in the outer-suburbs). The Greens’ national leadership does not recognise the prime importance of appealing to working class people. Making the party the political home of a larger section of the working class requires a focus on class issues like Medicare, the cost of living and union rights.

However, the desire for greater electoral support has seen The Greens’ national leadership look to win so-called progressive Liberal voters and farmers by promoting the party as a respectable parliamentary player, and class-neutral.

As Young Greens member, Vanamali Hermans put it, “Again and again the Greens have fallen into the trap of believing anti-capitalist, anti-establishment politics aren’t popular with the electorate. But as people continue to suffer under austerity and consecutive conservative governments, this myth quickly starts to unravel. Young people inheriting a broken welfare system, a broken housing market, years of unemployment and catastrophic climate change realise the failures of capitalism.”

The success of Bernie Sanders in the US, and Jeremy Corbyn in Britain are two recent examples of the way tens of thousands of people can rebel against neo-liberalism and look to anti-corporate, socialist politics. We need to build a party, in Australia, that can attract and organise that kind of politics.

Millions marched against Trump, and while the rebellion against neo-liberalism may not have developed here as much as in the US or Britain, in Australia we also need a left-of-Labor politics that unequivocally stands on the side of working people and helps rebuild class consciousness. Under the leadership of Di Natale, The Greens are going in the other direction.

Historically, the NSW Greens have been a bulwark against the national rightward trajectory of The Greens. But 2016 saw a series of body-blows against the left. These wins by Bob Brown’s NSW allies—Jeremy Buckingham’s faction—have shifted the NSW Greens to the right and threaten to erode the progressive politics that has underpinned the success of the NSW Greens. The stand of the party as a pole of principle is fading. If left-wing members do not get organised and fight, it’s inevitable that the right’s influence will grow.

Some Greens members regard forming a faction as undemocratic, but on the contrary, forming a faction is necessary to fight for party democracy. The right already has its own faction, run through the right-wing MP’s offices, blatantly defying party rules.

What is to be done?

In the last two decades thousands of people have joined The Greens in order to change the world—over refugees, the Iraq war, climate change and many more issues. There are thousands of Greens members and supporters who want a left alternative to Labor. Left Renewal can play a role organising them into a fight for the soul of The Greens The fight against the Buckingham faction needs to organise and mobilise these thousands of people around a platform that lays the basis for a strong, fighting left.

The war inside the NSW party has thrown up a huge array of issues, from democratic structures, to internet voting, factions, to inheritance taxes. All these have their importance. However two issues are key to building the left and the future of The Greens.

An activist party not an electoral machine

Many NSW Greens MPs are vocal advocates of social movements and regular speakers at demonstrations. But the record of the NSW Greens as an organisation is quite different. The party is geared towards electoral contests. Mobilising members and supporters to build movements and lead industrial struggles comes a very distant second.

Yet real change is won outside parliament and ideas only change in struggle. There is no way to defeat the right-wing take-over of the NSW Greens without organising to shift the party to put political mobilisation, not elections, at its centre. The left needs to use key issues like refugees, climate, union politics and anti-racism to build a membership network who organise and campaign with a shared vision for shifting The Greens to becoming an activist party.

While we can’t be indifferent to election outcomes, the real measure of success is involvement in social and industrial struggles. Elected representatives must be bound by democratically determined party policies. They need to represent the movements outside parliament not substitute for them.

This project offers great challenges, but also massive potential to transform The Greens and build a radical left. Greens local groups have the potential to be organising centres for the refugee movement, for union struggles and against Islamophobia. Allies for this can be found in each local group and particular mobilisations can be selected that allow the left to argue for local groups to become spaces that publicly build demonstrations and meetings.

The energy that goes into election campaigns—where phones are hit, volunteers organised and doors knocked, can and should be turned towards movement building.

For this year’s Palm Sunday refugee rally, for example, local Greens groups could leaflet and hold stalls in their local area. Greens teachers could help build contingents for Teachers for Refugees. Left Renewal can extend its influence by contacting Greens local groups and mobilising members to build the rally while organising a few hundred Greens members to march as a Greens contingent calling to end offshore processing.

A party that builds working class consciousness and orients to unions

Class is not just key for understanding how capitalism works. It’s also about knowing where the interest and power to win social change actually comes from. In 2017 working class power is too often hidden under decades of defeat and caution among unionised workers, whose numbers continue to fall. But rather than accommodate to this, the left’s job is to rebuild class-consciousness and union organisation.

The NSW Greens has a strong proportion of active unionists among its membership. But The Greens as party do not intervene into the union movement. This needs to change. The Greens need to be open to union affiliation. Organising resistance to the ABCC (the special police force for the construction unions); to smash the public-sector pay-cap that hobbles teachers, nurses and public servants, and to win wages and conditions in this round of tertiary sector bargaining, and lead a teachers’ fight for public education and against the testing shackles of NAPLAN are all projects Greens members could be organised around.

The existence of Left Renewal is a good first step. It has already encouraged anti-capitalist debate inside and outside The Greens. The task now is to reach out and cohere the broader left in The Greens and organise an articulate, defiant, class-based left politics across the party.

Solidarity is an anti-capitalist organisation. We are not in The Greens, but we work alongside Greens members on campus, in movements, and in the unions. The future of The Greens is important to the political left in Australia. Establishing a clear, left-wing party oriented on struggle and the unions could play an important part in breaking the stultifying atmosphere of business-as-usual politics in Australia and fighting for a society based on human need, not corporate greed.

We encourage everyone to sign the petition calling on Richard Di Natale to stop the attacks on Left Renewal and stand up to the Murdoch press www.bit.ly/flagpetition