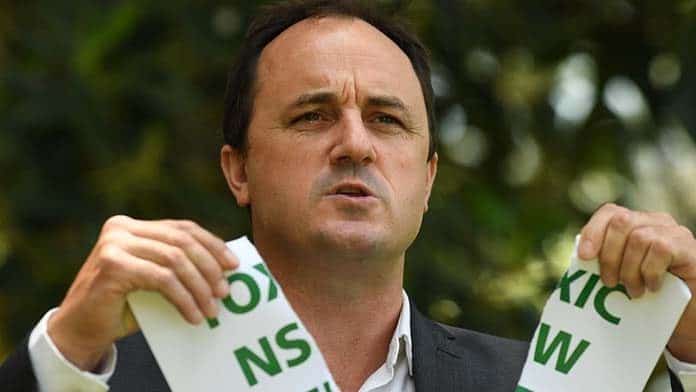 Right-wing NSW Greens MP Jeremy Buckingham resigned from the party in December. But none of the political issues at stake have been resolved.

Buckingham resigned after the NSW State Delegates Council (SDC) finally passed a motion calling on him to step down as a candidate for the March state election. Two previous attempts had failed to gain the required 75 per cent vote.

There had been growing pressure for this since sexual assault allegations against Buckingham were made public in August. On ABC’s 7:30, former Greens staff member Ella Buckland accused Buckingham of assaulting her in 2011, alongside three other women who accused individual Greens members and officials of assault and rape.

Buckingham’s sexist behaviour was already notorious within the NSW Greens. But an external company hired to investigate said there was insufficient evidence to hold him legally responsible for sexual assault. Ella Buckland says she was “disgusted” after being excluded from the investigation and forced to fight to even have her witnesses interviewed.

Buckingham acted appallingly, telling the media that he had been “cleared” and that Ella had made “false allegations” that had been used for “political gain”.

But it was not until then NSW Labor leader Luke Foley was forced to resign, following a harassment complaint from an ABC journalist, that Greens MPs decided to act. Although she and other MPs had remained silent during the Greens’ failed internal complaint process, at this point Jenny Leong used parliamentary privilege to call on Buckingham to step down.

Federal leader Richard Di Natale, a long-time political ally of Buckingham, also said he should step down, realising that he had become an electoral liability.

It’s welcome that Buckingham is gone. But the failure to wage a political fight against him and the more general conservative politics he represented within the party means there are major issues left unresolved.

Buckingham was part of a right-wing grouping in the NSW Greens which wants to embrace Di Natale’s more conservative approach based on single-minded electoralism and parliamentary wheeling and dealing.

Buckingham wanted to appeal to disillusioned National and Liberal voters and pull the Greens further to the right. His defeat by left-wing MP David Shoebridge in the pre-selection battle in NSW last year was a welcome relief, after previous successes for the right-wing grouping.

But the left failed to clearly fight over the fundamental division over political strategy, between electoralism and an active left party prioritising social movements outside parliament.

The fact that the right’s Cate Faermann won just as many votes as Shoebridge in the pre-selection shows that many Greens members remain unclear about the political divisions.

Buckingham will now contest the NSW election as an independent.

No change in direction

The SDC’s decision to request that he remove himself from the election ticket was met with outrage by his right-wing allies. NSW Greens MPs Justin Field and Cate Faehrmann threatened to quit the party, unless it held a recount of the pre-selection ballot to allocate Buckingham’s preferences and push the right’s Dawn Walker into an electable position. But they backed down when Di Natale intervened to broker a deal to keep them in the party.

While some see Buckingham’s resignation, and Di Natale’s support for his removal, as a major setback for the right in the NSW Greens, there has been no change in the overall rightward direction of the national party.

Di Natale remains committed to an electoral view of The Greens gradually winning seats to gain the balance of power. It was this strategy that saw him almost do a deal to support Malcolm Turnbull’s “Gonski 2.0” in 2017, angering teachers and education activists around the country. This was a narrowly missed “Democrats moment” for the party.

The Greens are in danger of losing ground to a Labor Party that is tacking to the left. They are likely to lose seats at both the NSW and federal elections, after a disappointing result in Victoria last November.

The party is yet to seriously take up the working class demands that could appeal to Labor’s base.

They have not been able to recognise the strategic importance of the ACTU’s “Change the Rules” campaign, or the opening for the party to champion the union demands, like the right to strike, that Labor will not support. The campaign will be one of the decisive issues in the federal election and has massive support amongst union activists.

The immediate crisis for the NSW Greens may have been averted for now, but it will inevitably re-erupt.

There is a pressing need for a party clearly to the left of Labor that mobilises its membership to build mass social movements and connect with working class aspirations for change. Unless the left fights, The Greens will be unable to meet this challenge.