Giorgos Pittas is a journalist at Greek newspaper Workers’ Solidarity and a member of anti-capitalist coalition ANTARSYA. This is an excerpt from a recent speech on Greece’s working class movement.

People now in Greece are suffering. The official unemployment rate is 21 per cent, young people between 17 and 24 years old have 50 per cent unemployment. At the same time wages and pensions have been cut between 20 per cent and 50 per cent.

There are about 400,000 people working without pay for five months now, because the bosses said we’re going to fire you, but you can stay and when we have money we will pay you. Thousands of people stand every day to get food from charities or from churches.

But stronger than the anger and the bitterness is the spirit of resistance. In the last two and a half years the country has been shaken by 17 general strikes involving millions of people. In 2011 in the centre of Athens alone there were three demonstrations a day. This was in the face of unspeakable violence by the police, to disperse people from the streets. Four people were killed and thousands of others beaten up and arrested.

For every general strike there were hundreds of all-out strikes, official or unofficial. The general strikes were imposed on the union leadership by rank-and-file workers. 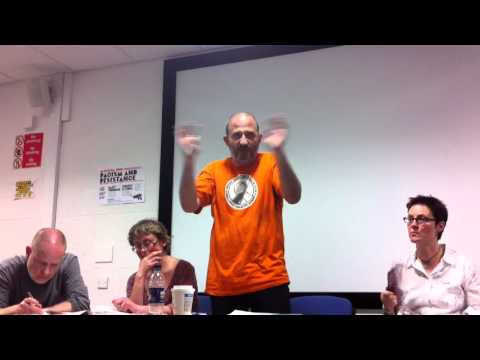 In May 2011, the spirit of Egypt came via Spain to Greece, in the Indignados movement. You had hundreds of thousands of people, gathering not only in Syntagma square where there were tens of thousands, but also in neighbourhoods in assemblies of hundreds of people talking about how the strikes could continue.

In October the whole public sector was on strike for weeks. The Ministry of Economics, the second most important state building, was occupied, with workers chanting slogans out the windows. Half of the state Ministries were occupied for two weeks and the state couldn’t really operate. The only thing they could do was bring out the police again and again to attack people.

This movement in two years has brought down two governments. All the privatisations they tried—even in education—the movement stopped them all.

But it’s not just the number of the strikes. There were big steps forward for rank-and-file action. In most cases the decisions for strikes were taken by union assemblies where hundreds of people participated. In many assemblies people elected workers’ committees to organise the strikes and co-ordinate with other workplaces.

Many started making steps towards workers’ control. The well known example is the hospital in Kilkis, where they decided to manage the hospital themselves. Also the poll tax they tried to impose through electricity bills didn’t succeed because the union stopped it. We also have the occupation in the Alter TV Channel, which was closed and then the workers occupied it and made it into the voice for all the workers on strike in different places in Greece. It was all this action that brought the earthquake in the May 6 elections.’

Understanding the rise and fall of Syriza