China deal: the issue is exploitation, not immigration 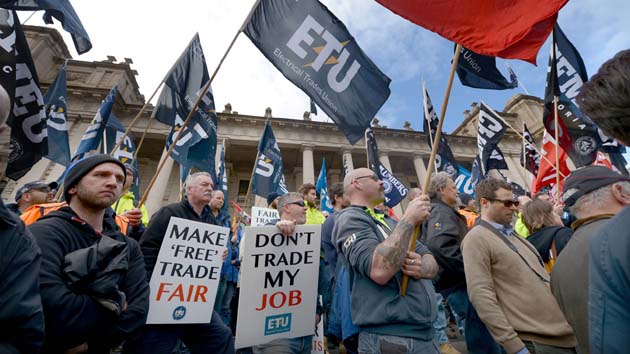 The debate over the Liberals’ China-Australia free trade deal (ChAFTA) has taken centre stage in federal politics. The problems with the deal are real. But there is no excuse for rhetoric blaming foreign workers for unemployment or taking jobs.

Tony Abbott has dug in to defend it, accusing the unions of launching a “campaign of xenophobic lies” and insisting it will boost the economy and jobs. The government has even put aside $25 million for an ad campaign.

But free trade agreements put corporate profits first. ChAFTA would allow Chinese corporations to sue the Australian government if it passes laws that harm profits. Australian companies would be able to do the same in China. This would allow challenges like that against the government’s plain packaging laws for tobacco, currently facing legal action under an investment treaty with Hong Kong.

The unions’ main attack on the deal has been over jobs. Under ChAFTA, Chinese-owned companies spending more than $150 million on a range of infrastructure projects can apply for a special Infrastructure Facilitation Agreement (IFA).

This would allow them to bypass requirements to advertise jobs locally before employing workers on 457 temporary migrant visas and the current requirement they be paid no less than $53,900 a year. The scope of this is wide, including investments in transport, agriculture and tourism.

The decision on employment standards and bypassing these “labour market testing” requirements will be entirely at the discretion of the Immigration Department.

This means the Department will negotiate wages and conditions on sites, without any ability for the union movement to be involved.

Workers on 457 temporary work visas are vulnerable to exploitation because they can be deported if they lose their job. Locking out the union movement from negotiations and reducing safeguards significantly increases the chance migrant workers will face exploitation.

Trade Minister Andrew Robb has branded these claims “dishonest”, saying the Immigration Department would apply guidelines requiring companies to prove there are no qualified local workers to do the jobs. But according to the Australian Fair Trade and Investment Network (AFTINET), “such guidelines are not legally binding and could be challenged by the Chinese Government because the agreement makes legally binding commitments”.

But some unions are using dangerous arguments that blame foreign workers for unemployment and taking jobs. The CFMEU’s TV ads have been a case in point.

At a union rally against ChAFTA in Sydney, AWU official Russ Collison explicitly linked the 800,000 unemployed to foreign workers, saying, “good fair dinkum Aussies are being done over”. Under the free trade deal, “There’ll be no work in this country. It’s going to end up with the Chinese coming in, they’ll be flying in and flying out”, he said.

The problem is not with migrant workers coming here but the potential for exploitation as a result of the new agreements. Instead of a xenophobic campaign, unions should be demanding a role in negotiating conditions for migrant workers under IFAs and for their right to join unions. We also need to demand an end to the visa conditions that make them reliant on their employer to stay in Australia and for the right to permanent migration.

Hundreds of thousands of migrants come to Australia every year. The union movement has been built on the unity in struggle of new migrant workers and local workers.

Migrant workers don’t destroy jobs, they help build a bigger economy with more work for everyone. Opposition to free trade deals can’t be an excuse for scaremongering about foreign workers.