Demanding the government “buy Australian” or impose tariffs has failed to save jobs in the past, and paints “foreign workers” as the enemy, writes Phil Griffiths

As job cuts start to mount, an old argument is gathering force: protectionism—the idea that the government should protect “Australian” jobs, using either tariffs, or “Buy Australian” favouring Australian-made in its own purchasing.
The ACTU, for example, recently called on the Rudd government to make any government funding to business conditional on “Buying Australian”—giving preference to locally produced goods and services. This has been raised as a way to save the jobs of Pacific Brands workers facing the sack and protect jobs in the textile industry. 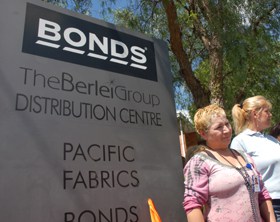 The idea is surfacing in other countries too. US President Obama’s stimulus bill includes a controversial “Buy American Only” requirement for federally funded projects.
It’s an argument that seems to make a lot of sense. If Australians buy Australian-made, there’ll be more jobs here.
Most people embrace protectionism for good reasons. The trouble is, it doesn’t save jobs.

How tariffs failed
The car industry in Australia sheltered behind tariff protection from its very beginning until the late 1980s. And what was the result? Australian workers paid more for cars than workers in just about any other country, yet workers at Holden and Ford were amongst the lowest paid in heavy industry, and far worse paid than car workers in America, Japan or Europe.
Tariffs protected the companies, and protected their profits. They did not protect workers.
There were regular cuts in jobs as companies brought in labour-saving machinery and demanded higher dividends.
We see exactly the same story in clothing, textiles and footwear. This has been, without doubt, the worst area of manufacturing to work in. These industries fed off the labour of immigrants, mostly women, who were barely paid the minimum wage. Abuse by supervisors and sexual harassment were common in these “protected” industries.
And…jobs weren’t protected. Companies used every opportunity to downsize using more sophisticated machinery and production techniques.
These issues have been brought to a head by the decision of Pacific Brands—makers of Bonds, Yakka and King Gee clothes—to sack 1850 workers, and close down their seven clothing manufacturing factories in Australia.
But tariffs aren’t the issue for the company. It has been quite explicit—it doesn’t want higher tariffs to keep the factories open. It already imports a lot of clothing, and higher tariffs would simply make those products more expensive.
That’s consistent with the position taken back in 2003, when Pacific Brands endorsed the government’s plan to cut clothing, textile and footwear tariffs. It is not clear that consumers could buy all-Australian clothes even if they wanted to.

Chasing profits
The main problem with arguments for higher tariffs and other protectionism like “Buy Australian” is that it avoids the real reason for the sackings—bosses wanting cheaper production and higher profits.
“Buying Australian”, maintaining tariffs (or increasing them)—does nothing to stop employers’ drive for higher profits, weaker unions, fewer workers and more intense working conditions.
And every time unions have lined up with companies to demand higher tariffs, they’ve put the struggle against management on the back burner, to the detriment of their members.
There is a further problem with raising tariffs. Other countries are then driven to do the same in retaliation. This is exactly what happened in the Great Depression in the 1930s, and millions of more jobs were lost as a result.
Millions of Australian workers depend on exports for their jobs. What happens to jobs at the Holden engine plant if other countries raise tariffs or other restrictions against imported components?
What happens to jobs in the coal industry if China decides to restrict Australian coal imports? In fact, 20 per cent of Australian manufacturing is exported—far more than the entire clothing, textile and footwear industry.
The same kind of thing could happen as a result of calls from the AWU to restrict Indian steel being used in Australian building projects. Bans on Indian steel could result in India banning Australian exports of iron ore, coal and other products.
The Australian government has actually protested to Obama about his “Buy American” provision. This could see Australian iron and steel producers, who already export $500 million of Australian steel to the US, locked out of contracts for the massive infrastructure projects funded by the stimulus package.
Obama has just banned Mexican trucks from American roads. In retaliation, Mexico has introduced tariffs on 90 imported US products.
This points to the dark side of protectionism: nationalism, and racism. It works on the idea that we have to look after “our own”; as if workers who happen to live in other countries are the enemy. In Queensland, “our own” has often meant other Queenslanders, as if Victorians were the problem.
So while some unions have embraced protectionism, so too have the worst rags of the Murdoch empire, papers like Sydney’s Daily Telegraph. In Britain, the Daily Star—another revolting, anti-union paper—has been promoting “British jobs for British workers”, a slogan being pushed by Britain’s neo-fascists.
We can see this dark side in the demand that immigration to Australia be cut because of the crisis.
Does that mean that other countries have a right to start throwing Australian citizens out of their labour markets? There are over one million Australian citizens living and working in other countries.
The problem we face is not foreign workers, but capitalists of all stripes. Fighting them needs the greatest possible unity.
When workers look to tariffs, and to save “local” jobs, we turn away from our friends and line up with our enemies.
We let the real job-killers off the hook.