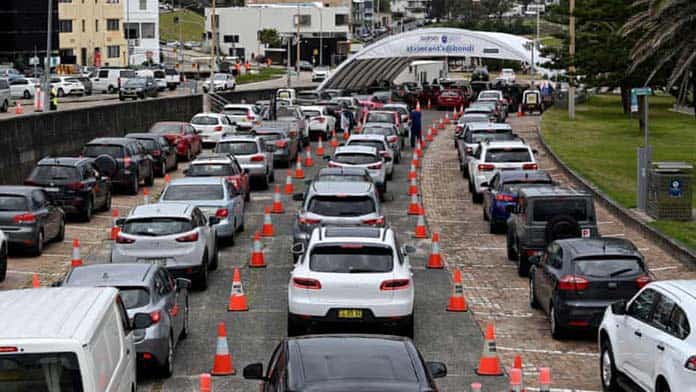 An increase in COVID cases was always predicted as the country moved away from the use of lockdowns and other restrictions, in the context of high rates of vaccination. The Omicron variant has simply sped up this process.

But governments have failed to boost health funding so the system was prepared to cope. In Queensland and WA, doctors were warning that the system was close to collapse before Omicron even hit.

PCR testing in Sydney and Melbourne has been completely overwhelmed, with queues stretching for hours on end and many turned away as sites reach capacity. In NSW people have queued for up to eight hours to get a test. Some have become so desperate they decided to wait in their cars overnight.

And NSW residents are waiting up to six days for results. This means that the system of testing and contact tracing designed to slow the spread of the virus is almost worthless.

This is the result of relying on private companies to run COVID testing, instead of governments taking responsibility and planning to ensure there is adequate capacity.

Rapid testing has been widely used in Europe and the US for almost 12 months, to allow easier screening as a backup to PCR testing. Rapid testing kits were sent free to homes in Britain last year.

The peak doctors’ body, the AMA, as well as pathology providers warned the federal and state governments that PCR testing would struggle to cope. Yet nothing was done to place bulk orders for tests until the testing system was on the verge of collapse.

Unions have been calling for rapid tests to be more widely available for months.

But Scott Morrison has now stepped in to stop Victoria and NSW making them free for the general public, insisting that free tests are limited only to vulnerable sections of the community and selected industries.

He explicitly justified this as necessary for companies to keep profiting from the tests, saying, “What’s important is that [the private market] have the certainty that they know that governments aren’t all of a sudden going to go around and start providing [rapid tests] free to anybody and everybody.” The Pharmacy Guild lobbied Morrison against the plan for free tests, according to the Nine Papers.

Hospital staff in NSW and Victoria are fatigued and overwhelmed after repeated COVID surges over the past two years. Hospitals across the country were understaffed even before COVID hit. Now with 2000 health workers forced to isolate after exposure to COVID in NSW, hospitals are facing crippling staff shortages.

Yet there has been no ongoing increase in hospital funding. The NSW government has also refused to bring nurse to patient ratios into line with those in Victoria and Queensland.

The nurses’ unions across every state need to lead a fight for the extra staff and funding that is needed for hospitals to cope.

The Omicron variant is the main reason for the rapid increase in COVID cases. It is more transmissible even than Delta—and crucially it is more able to infect people who are vaccinated.

It is also a far milder virus. NSW Chief Health Officer Kerry Chant says that the risk of hospitalisation is “around 60 per cent to 80 per cent less than for Delta”, based on evidence from experience in South Africa and the UK. In Queensland, where Omicron is the only variant seriously circulating, there are more than 14,000 active cases and only one person in ICU.

There is also a chance that case numbers will peak quickly, with the South African government announcing that cases there rose at a “staggering” rate, but peaked after only four weeks and have already declined enormously.

However, the sheer number of cases from Omicron could still overwhelm the hospital system here, with large numbers still needing hospitalisation with less severe symptoms.

Two shots of a vaccine still provide good protection against hospitalisation but do little to stop infection from Omicron. A third dose has been shown to have a significant impact against infection and boost overall protection.

As a result, the wait for a booster has been brought forward to four months from 4 January, and three months from 31 January. This staggered timetable is due to staffing and delivery limits rather than any health reasons. Again the failure to boost the health system’s capacity is slowing the rollout.

The increase in cases can also be slowed through measures such as wearing masks and continuing to use testing, tracing and isolation.

Instead governments are abandoning many of these measures in the face of the collapse of contact tracing and testing.

After a week, NSW Premier Dominic Perrottet was forced to reverse his scrapping of requirements to wear masks indoors, density limits in hospitality and QR check-in codes at low risk venues, announced just as the spread of Omicron was starting. While these measures may have some effect dampening the spread, they will not stop continuing mass transmission and Perrottet steadfastly refuses to take action to increase resources in the hospitals where it could make a serious difference.

Scott Morrison’s new national rules on close contacts, setting out who must isolate, narrow this to only household contacts who have spent more than four hours together. Those exposed at work or in pubs and nightclubs, all major sites of spread, are exempt.

He has refused to make rapid tests free, sitting on his hands despite calls from health experts. Now he is throwing the vast majority of the population to the wolves.

Testing will be limited, contacts left to manage their own possible infection and many workers will be left without paid testing or isolation leave.

Dr Omar Khorshid, President of the AMA, savaged the changes saying, “We will miss so many more cases with this new, more narrow definition of a close contact” and that it would “simply accelerate the outbreak” of Omicron.

Morrison has made it clear that the new contact tracing measures and the refusal to offer free rapid testing are designed to benefit business and to get people back to work even if they might be infected.

The union movement has to respond with a campaign for guaranteed testing and sick pay, free rapid testing and improved ventilation in all workplaces, including schools.

Increased funding for testing, hospitals and the vaccine rollout are crucial to protecting us from the Omicron variant—and to making sure we protect people’s health from anything else the pandemic throws at us.

COVID has hit lower-paid workers hardest, according to new research. Solidarity spoke to lead researcher Dr Tom Barnes from the Institute for Humanities and Social Sciences at the Australian Catholic University.