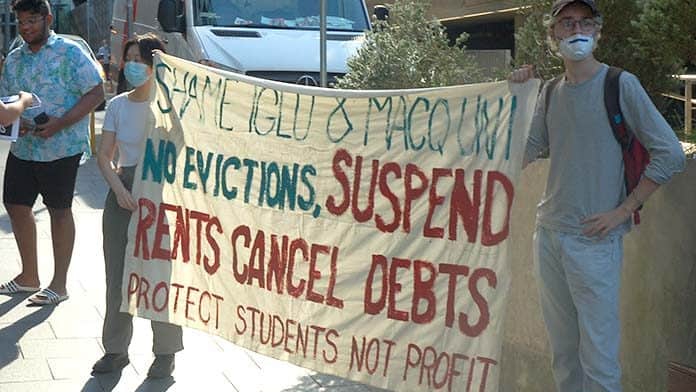 With soaring unemployment a crisis for renters was inevitable in the absence of strong government support. Renters disproportionately work in industries like retail and hospitality which have been the hardest hit.

But tenants and the newly formed Housing Defence Coalition in Sydney have shown how to fight back.

Even before the full lockdown, growing numbers of renters were being driven out. In March residential bond refunds were up 17 per cent, year on year, while new bond lodgements were up just 3.2 per cent over the year. Unusually high numbers of people were leaving their homes but unable to rent new one.

Yet it wasn’t until 15 April that the NSW Liberal Government introduced any protections for renters.

The new laws are woefully inadequate. The 60 day stop on evictions only applies to tenants who have lost 25 per cent or more of their income due to COVID-19 and who are being evicted for non-payment of rent.

The Liberals’ policy has left landlords able to throw people onto the street for any other reason. Their six month framework for negotiating rental reductions is close to useless. Landlords can largely ignore their tenants’ requests and the only enforcement mechanism is mediation through Fair Trading. The policy does, however, make it harder and slower to evict tenants for non-payment of rent if they have lost income due to COVID-19.

Unemployment, weak protections and landlords’ willingness to act outside the law have all meant struggle is necessary to defend the right to safe and secure housing.

Sydney Uni international students were the first to show it is possible to fight. Many had lost all income from jobs or parents, while also being excluded from JobKeeper and JobSeeker payments by Morrison.

In March, after being pressured to keep paying high rents at Sydney University Village and other Sydney Uni linked student housing, they organised a sign-on letter to the Vice-Chancellor demanding no evictions and a reduction in rent.

At first, there was no response. But management cracked after students went to the media and campaigned to win solidarity from other students, who displayed posters saying “SUSPEND RENT” in their windows.

An attempt to intimidate the campaign by sending staff into a student’s unit to tear down the posters ended in embarrassment for the university.

Students defied the bullying and posted a video of the incident on social media.

Aman Kapoor, an Indian international student who led the protests, said, “We won the no eviction confirmation from Vice-Chancellor. And many students are now getting their rent fully suspended or getting other options like rent reduction up to 50 per cent.”

International and domestic students also won a guarantee of no evictions at the Macquarie Uni Iglu Student Accommodation in Chatswood, after an attempted illegal eviction.

An international student with less than $1 in the bank who was living off food donations was threatened with eviction for non-payment of rent in early May.

The student challenged management and the Housing Defence Coalition organised a protest demanding no evictions and a rent suspension. Twenty protesters delivered food parcels to students and invaded the Iglu foyer, forcing management to issue an email saying they would not evict anyone.

In April, another action was launched when Layla, a trans-woman living in St Peters in Sydney, was threatened with illegal eviction.

She had lost all income due to an injury and was excluded from any government payments as she is from New Zealand.

Layla was given three days’ notice to vacate the property, with heavies organised to move furniture on the eviction date.

The Housing Defence Coalition organised 15 people to assemble at the house on the day.

Despite restrictive public health orders and police threats, the eviction was abandoned. She won the ability to stay while seeking help and awaiting a tribunal date.

The St Peters landlord owns millions in property on the street and one neighbour described him as a “slumlord”.

Sydney University Village’s parent company Campus Living Villages is worth around $2 billion. Iglu has over $150 million in assets and their major shareholders include Macquarie Group and GIC Sovereign Private Limited, whose assets are estimated to be worth over $600 billion.

But resistance has shown we can fight back and win.