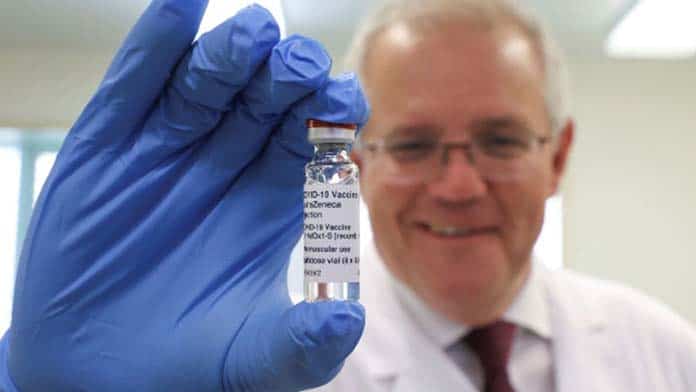 Morrison’s failure on support for workers and the vaccine have left Australia dangerously exposed in the face of the new more contagious Delta variant of COVID.

The renewed outbreaks and lockdowns across the country show that the virus is far from under control.

Melbourne has experienced its fifth lockdown and Sydney is facing a lockdown of five weeks or longer. Workers at pubs, restaurants, cafes and sports centres have again been stood down.

Yet Morrison has refused to reintroduce JobKeeper, offering lower payments far below the minimum wage. For the first week of a lockdown workers in Sydney were given nothing, then $500 a week in the second and third week. Those who had lost less than 20 hours work a week received $325.

The payment for both casual and permanent workers has now been increased to $600 a week and will be paid for the first week of a lockdown. But this is still $300 a fortnight less than JobKeeper was when last year’s lockdowns began. Anyone already on JobSeeker or other income support is excluded.

There will be still workers taking a huge hit to their incomes, and at risk of missing rent or mortgage payments.

The failure to support workers has also increased the spread of the virus, forcing more people to continue going into work. Without the right to sick leave, casuals still face pressure to go into work when sick.

NSW’s Chief Health Officer Kerry Chant has pointed to “a number of workplace clusters” as the key factor in the virus spreading into south-western Sydney. But the reason there is more chance for the virus to spread in Western Sydney is that most people can’t work from home—unlike the professionals and officeworkers concentrated in wealthier areas.

Instead of supporting workers to stay home or demanding employers put in place more safety measures, we are again seeing government efforts to blame ordinary people, with NSW Premier Berejiklian declaring “The biggest problem we have is lack of compliance”.

Now all construction sites in Sydney are closed until at least 30 July and workers in Fairfield, Canterbury-Bankstown and Liverpool will not be allowed to leave those regions for work (except emergency services, health, aged care and disability workers).

Berejiklian has singled out migrant communities in Western Sydney, launching a police operation with over 100 officers, mounted police and dog-squads to enforce restrictions there.

Instead of police harassment and intimidation there should be a surge in health workers and community workers, going door-to-door to encourage testing and explain the response—not more heavy-handed policing.

For months, Morrison has shown little urgency on vaccination, saying that it was “not a race”.

But with Sydney now facing a major outbreak, there is fierce competition for vaccines. NSW Health Minister Brad Hazzard even described the situation as, “almost a sense now of The Hunger Games, of people chasing vaccine”.

Australia is ranked last out of the 28 countries in the OECD, a club of the world’s richest nations, on vaccination. Around 13 per cent of the population has been fully vaccinated, with an estimated 80 per cent needed to adequately protect from outbreaks.

Morrison has hopelessly failed to ensure aged care workers get vaccinated. Still only 40 per cent have had their first vaccine, despite supposedly being in category “1a” to get one.

Most have been forced to find an appointment in their own time. Around 50,000 council workers in NSW have been given paid leave to attend vaccine appointments—something that should be extended to all workers, alongside sick leave to deal with side effects.

But the main problem is that, following health advice that only over 60s should received the Astra-Zeneca vaccine, there is simply not enough vaccine to go around.

Morrison made an appalling mess of securing sufficient doses from Pfizer. He was four months behind the US, UK, Japan and Canada in striking any deal.

And the ten million doses initially ordered were only enough for one-fifth of the population. It wasn’t until February that the order was doubled—by when Pfizer was already swamped with demand.

The continual changes in advice on who should use the Astra-Zeneca vaccine have also caused massive confusion.

But simply vaccinating Australians is not enough. The vaccine nationalism which has seen rich countries simply worry about their own populations is a disaster.

The virus is still running rampant through the largely unvaccinated global south.

If this continues new variants, potentially including vaccine resistant strains, will emerge, threatening another deadly wave of the pandemic here.

Australia should be doing everything in its power to push for a global response, forcing pharmaceutical companies like Pfizer, Moderna and Astra-Zeneca to release patents, share vaccine technology and co-ordinate with governments around the world to scale up production. Australia is capable of producing one million Astra-Zeneca doses a week, most of which are not being used here.

We need to keep fighting for the health measures and support for workers needed to control the virus—and to ensure no worker is left behind as a result.