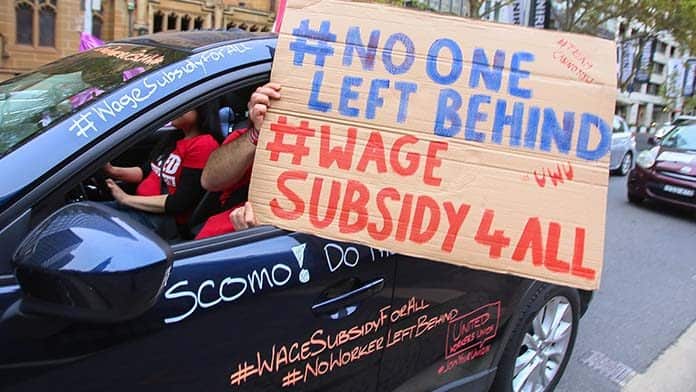 So far Australia has managed to avoid a coronavirus outbreak on the scale of parts of Europe or the US.

Instead of talking about a six-month shutdown, Scott Morrison is now floating the possibility measures could be relaxed in another four weeks. But that’s more due to good luck than Morrison’s good management.

If the government had properly prepared for a pandemic, testing measures could have been in place months ago. Testing, tracing and quarantine are the backbone of South Korea’s response, where an effective coronavirus test was developed in a week and a mass-testing regime was running within a month of the first cases.

The Australian government has had more time to prepare than elsewhere. Yet, the Sydney Morning Herald reports that Intensive Care Unit staff at Sutherland and Westmead hospitals are still having to make their own face shields using plastic covers from stationary notebooks.

Meanwhile the economic fallout from the crisis is accelerating, in the fastest collapse since the Great Depression. The Grattan Institute estimates unemployment could reach 15 per cent, with 3.4 million unemployed, even with the JobKeeper wage subsidy keeping some people in a job.

But many are set to miss out on JobKeeper.

Around 2.2 million casual workers, employed at their current job for less than 12 months, as well as temporary migrant workers, international students, refugees and asylum seekers have all been left out.

This is cruellest for those on temporary visas, who are not eligible for JobSeeker benefits either. Many are now facing destitution.

For those who now can’t support themselves, Morrison declared, it was time to go home.

Morrison fuelled racism, scapegoating temporary migrants, by declaring, “our priority is on supporting Australians and Australian residents… to ensure that we can maximise the economic supports that we have”.

But if the government can find $130 billion for its JobKeeper package, it can find the other $25 billion the Treasurer says it would cost to extend it to everyone.

Unions including the ACTU are calling on the government to extend JobKeeper to all casuals as well as anyone on a temporary visa.

Morrison keeps claiming that “We are all in this together”—but he has made it clear that, “business is at the centre of the economy.” Already we have seen NSW and Queensland state governments renege on wage increases for public servants, nurses, and teachers. The federal government has unilaterally imposed a 12 month wage freeze on all federal government agencies.

The federal government has called on Fair Work to delay any increase in the minimum wage, while the Australian Chamber of Commerce and Industry has suggested that Fair Work should consider a pay cut similar to the 10 per cent cut notoriously imposed on workers during the Great Depression.

And big business is pushing its claims for greater flexibility in industrial relations too. Attorney-General Christian Porter has cut the time employers need to consult on changes to enterprise agreements from seven days to 24 hours.

Morrison’s vision for the other side of the crisis is very clear. In late April he declared he would adopt an aggressive pro-business investment strategy, including wide scale industrial relations reform. And the government is still talking up tax cuts for big business.

To ensure that the profits of the private sector interests are prioritised, Morrison has established a National COVID-19 Co-ordination Commission, headed by Nev Power, a former chief executive of Fortescue Metals and present boss of Perth Airport.

To top it off, there is also Philip Gaetjens (who was the chief of staff for both Peter Costello and Scott Morrison) and the Home Affairs Secretary and immigration thug, Mike Pezzullo.

Morrison wants the bosses to be in the box seat for the “snap back” to business as usual.

Rather than nationalise Virgin airlines, and guarantee the jobs and entitlements of all Virgin workers, the Liberals have left their fate to the market. Along with the attacks on awards, like short-time and forced holidays, this is a taste of things to come.

There won’t be a snap back recovery. The Reserve Banks says wages will fall even further.

How we fight now is going to determine what things look like “on the other side.”  Christian Porter is boasting that the government has “established a more cooperative approach with the ACTU.” The ACTU should reject the overtures from the government to help “re-animate the economy”.

There needs to be a fight for jobs and against wage cuts. We will have to fight to extend JobKeeper subsidies to all, including migrant and undocumented workers, and fight to keep the increase to JobSeeker payments.

We are not powerless. United Workers Union members in warehouses have shown how it is possible to fight around safety conditions at work, and win. Transport workers, cleaners, teachers, workers in supermarkets and warehouses, are not just essential, they have industrial power.

Even for those working from home, industrial action remains possible. In some cases workers at home will have increased bargaining power.

The coronavirus and the economic crisis it has precipitated has exposed everything that is rotten about capitalism. The fight for the future is a fight for a socialist society, in which the resources are democratically controlled to produce for human need not greed.

Editorial: Turn rage at Morrison’s failure on rape into fightback against the Liberals’ sexist policies