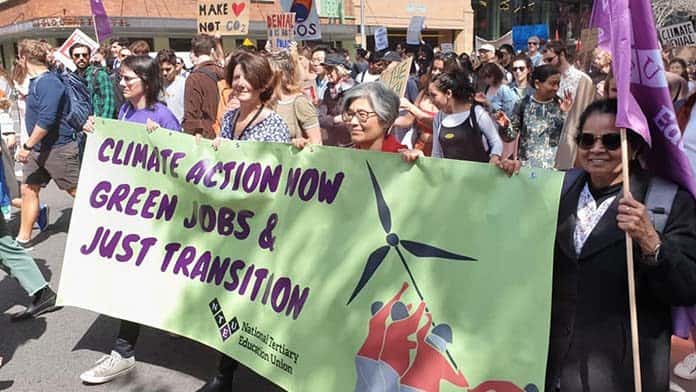 The union turnout on 20 September was a crucial step towards putting jobs and workers’ rights at the centre of the climate fight.

School climate strikers made a decisive shift following the election to reach out to unions and workers, adopting a demand for a just transition and secure, clean jobs.

In Sydney, the biggest union contingents were from the university education union, with hundreds of staff joining a feeder march from Sydney Uni, UTS and the University of Notre Dame. UNSW, Western Sydney Uni and Macquarie Uni also had their own contingents. There are now rank-and-file climate staff groups at most of the big universities in Sydney.

One of the highlights was the speech from the stage by maritime unionist Tommy-John Herbert. He told the crowd, “The MUA is currently fighting for an offshore wind project off the coast of Gippsland Victoria that has the power to bring hundreds of jobs to unemployed seafarers, hundreds of jobs to construction workers.

“In the Hunter Valley the government is desperately trying to keep the Liddell power station going, they could invest that money in renewable energy and retraining those workers. We need tens of thousands of those jobs.”

He was on strike over enterprise bargaining, along with others from Hutchison who attended.

The national secretary of the electricians’ union also spoke and called for “the government to invest in renewables” and “job security and a secure future” for workers transitioning from jobs in coal.

Fifty National Union of Workers members who were on strike from Fenner Dunlop voted to attend the Melbourne protest and one of them, John, addressed the rally. Farmworkers affected by climate change also shared the platform.

“Our work depends on the coal mining industry as we manufacture conveyer belts for coal mines”, John said.

“Me and my workmates care about better wages and conditions, but we also care about climate change. I know the work we do needs to move away from coal mining, but workers who work in these industries like me must have a say in what comes next. We need to make sure good, well-paid union jobs are at the centre of future clean industries.”

Victorian Trades Hall also organised a contingent of 150 workers to the Melbourne rally, which met with a university staff union contingent of another 100 people.

One group of workers at an organic foods warehouse managed to get their workplace shut down for the day to attend the Sydney rally.

The nurses’ union bussed in members. Cleaners, firefighters and teachers all had contingents as did workers from the community, transport, retail, bank and public sectors.

The construction division of the CFMMEU brought 30-40 mostly delegates and members, as well as striking workers from GBAR. The union’s flags were prominently displayed near the front of the stage.

This was despite heavy pressure from the mining division of the union not to attend the rally—which stifled efforts to produce and distribute a leaflet supporting the rally and linking it to the fight against the Liberals’ Ensuring Integrity bill.

The mining division of the CFMMEU remains hostile to the climate movement, preferring to defend jobs in the coal industry. It also pressured Unions NSW to scale down its support. The secretary of Unions NSW, Mark Morey, had been asked to speak at the rally, but declined as a result.

Hunter Workers pulled its support from the climate strike in Newcastle after facing similar pressure from the miners’ union, and even reneged on an offer to lend the school strikers their stage.

There has also been some backlash within the RTBU transport union against members who attended the climate strike as an RTBU contingent. The union’s members include coal train drivers. Some members have reportedly left the union over it.

Despite these ructions, the union mobilisation was a huge step forward from the previous strike in March. It shows the possibilities of winning union support for the climate movement—and to drawing in the power of workers’ strike action. This will be vital if the movement is to force change.

The Workers for Climate Action group in Sydney has played an important role in building this perspective within the climate movement. If we are to successfully defeat Morrison and win a just transition, building support for the climate strike demands within unions at the grassroots level is critical, as is taking industrial action in favour of them.

The school strikers are discussing another big mobilisation next year on 1 May. In Sydney, the maritime and construction unions are already committed to a strike rally on May 1 around industrial demands. A joint rally including climate action demands, with some workers on strike, would be another step forward for the movement.