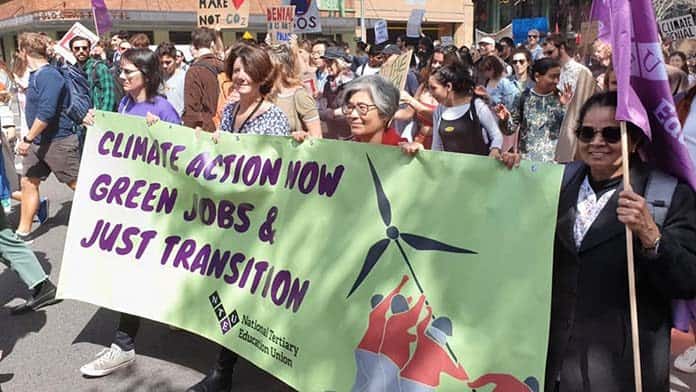 Two major strikes in May will see unions and students out in force for climate action. Last year School Strike for Climate brought 350,000 to the streets on 20 September.

Their next Climate Strike has been called for 15 May. And on 1 May, trade unions in Sydney will stop work to rally for workers’ rights and climate action.

University workers in Sydney from five campuses met in early February to plan for the mobilisations.

The meeting attracted 40 staff from Sydney University, UTS, UNSW, Western Sydney University and Macquarie and centred on building staff contingents to the Climate Crisis National Day of Action on 22 February. It also strongly backed a resolution to mobilise widely for the 1 May strike rally and for the Climate Strike on 15 May.

Kurt Iveson, Sydney branch president of the National Tertiary Education Union (NTEU), explained why the union had strongly backed the Climate Strikes in 2019 and argued that the union has to become a vehicle for staff climate activism. He pointed to examples of past political strikes such as the Builders Labourers Federation’s Green Bans and railway strikes against uranium mining in the 1970s.

Others drew out lessons from mobilising on campus last year. University Vice-Chancellors (VCs) were pressured to concede that no one attending the strikes would be penalised. But in many departments staff had to fight even to use paid leave or their lunch break to attend. To shut down whole departments we will have to fight the VC and local administrators tooth and nail.

Several workers mentioned the importance of linking industrial issues to the climate action mobilisations. A number of people have joined the NTEU through the climate strikes as a result of the union’s role in leading calls for investment in publicly-owned renewables and a just transition for workers. So climate mobilisation can strengthen the fight over casualisation and management restructures. But to get a real strike over climate action, we will also need to build up people’s confidence to strike over industrial issues, and to win those industrial fights.

Iveson raised that white-collar unions like the NTEU need to build credibility with blue collar unions, whose members face the loss of jobs in fossil fuel industries, in order to win stronger union support for climate action.

Others responded by saying the best way to build credibility with unions like the CFMEU and the MUA was to hit the streets with them shoulder-to-shoulder for the 1 May strike rally. Last year thousands of workers marched off construction sites, factories and wharves against the Morrison government’s anti-union laws. This year the 1 May stopwork rally includes demands for climate action, alongside workers’ rights and social justice.

Mass mobilisation will be crucial to winning jobs, public investment in renewables and the emissions reduction required to avoid future climate disasters.

At the 20 September Climate Strike in Sydney teachers, public servants, nurses, electricians, construction workers, wharfies, land regeneration workers and many more came as part of around 20 different contingents. University staff and students organised a 5000-strong contingent to march into the Domain.

Hutchison workers at Port Botany, as well as NUW members at Fenner Dunlop and farmworkers from Melbourne, all on strike over workplace issues, attended the rallies. We will need larger contingents and many more workplaces out on strike for climate justice in future.

The 22 February day of action has been endorsed by the United Workers Union, the Maritime Union and the Nurses union nationally—as well as Unions NSW and Unions ACT.

Working class support for the climate movement is vital. Workers are the only force in society with the power to win the movement’s demands—through strike action that stops the gears of the economy turning.

That’s why Morrison always talks of job losses and higher electricity prices to try to undermine support for climate action. The truth is that Morrison doesn’t care about job losses or workers’ rights—but the climate movement should.

It’s crucial that we build the largest possible walk-offs for the Climate Strike on 15 May. But it’s also vital that the movement seriously mobilises for the 1 May strike rally, and stands in solidarity with workers who are defying the law to fight for workers’ rights.

As the Liberals attack militant unions like the CFMEU through their union-busting Ensuring Integrity Bill, climate activists and unionists everywhere need to back their fight.

The climate movement will only succeed if it nails the real culprits—the big polluting companies and the politicians who back them. We need to tax the rich to deliver publicly-owned renewables—and to shut down the workplaces and the streets to win it.