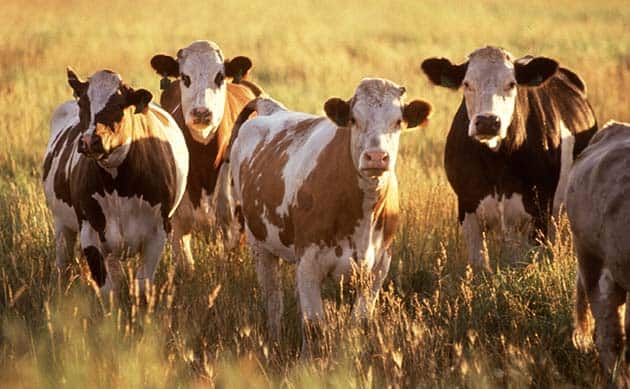 Al Gore has gone vegan and actor Leonardo Di Caprio has thrown his name behind a new film, Cowspiracy, which suggests that all we have to do to stop climate change is stop eating meat.

Is that really all there is to it?

Cowspiracy starts reasonably enough. Narrator and co-producer Kip Andersen expresses his frustration that lifestyle changes such as riding his bike and taking shorter showers are not leading to emissions cuts. But the film goes rapidly downhill. Rather than challenge the failed politics of individual lifestyle change it doubles down on the strategy, claiming that the real problem is that we are still eating hamburgers.

But individual lifestyle choice is a dead end that is incapable of delivering significant emissions cuts. It blames ordinary people rather than challenging the power and profits of the fossil fuel industries. It avoids the need to build a movement to force politicians to act.

Cowspiracy paints animal agriculture as the number one climate villain by cherry picking wrong or misleading “facts” and “experts”. The film only pays lip service to the idea that fossil fuels are a problem, and completely ignores profit as a driver of environmental destruction.

One of the film’s main claims is that, “Animal agriculture is responsible for 18 per cent of all Greenhouse gas emissions, more than the combined exhaust from all transportation”, or as it puts it elsewhere, “livestock and their by-products actually account for…51 per cent of annual worldwide greenhouse gas emissions”. These claims both come from the widely criticised 2006 UN Food and Agriculture Organisation report Livestock’s Long Shadow. It has been debunked by Simon Fairlie in his book Meat: A Benign Extravagance. He puts the figure at closer to 10 per cent. More recent data from the authoritative Intergovernmental Panel on Climate Change (IPCC) Fifth Report in 2014 comes to a similar figure of under 10 per cent. (It lists agriculture as producing 24 per cent of global emissions, of which methane produced by livestock accounts for 39 per cent).

Nor is it true that agriculture emissions are growing faster than those from other sources. The IPCC says, “emission from fossil fuels contributed 78 per cent to the total greenhouse gas emission increase between 1970 and 2010. Since 2000 emissions have been growing in all sectors except in agriculture”.

The film shifts away from climate concerns as it progresses, moving to animal rights and veganism. It makes the old vegetarian argument that eating meat leads to human starvation, claiming, “82 per cent of starving children live in countries where food is fed to animals, and the animals are eaten by Western countries”.

But the fundamental reason people starve is competition for profit. The world produces more than enough food to feed everyone. The reason people starve is that they can’t afford to buy it. Huge amounts of food go to waste when they cannot be sold at high enough prices. Governments in rich countries also pay farmers not to grow food to keep prices high.

All the way along Cowspiracy alleges a conspiracy to let cows off the hook. It hints darkly at the power of the meat industry to silence environmental organisations. It asks questions about meat industry funding of environmental organisations without making any specific allegations which could be proved or refuted. It makes ponderous use of the fact that Greenpeace will not grant Kip Andersen an interview.

But all the conspiracy ultimately amounts to is the suggestion that big environmental organisations need donations from people who eat meat. Even this is undermined by the fact that Greenpeace actually does encourage people to eat “less or no meat or fish”.

There are problems of conservatism in big environmental organisations. But these having nothing to do with meat. Naomi Klein’s film and book This Changes Everything. Capitalism vs The Climate exposes the cosying up to corporations by big environmental groups and advocates grassroots movement building in response.

But Cowspiracy is ultimately demobilising—calling for a focus simply on individual lifestyle change. Kip Andersen, a self-described “serial entrepreneur” who makes a living from “a number of business that I run” makes this explicit in an interview with realnews.com stating, “The solution is really simple…it doesn’t even take necessarily widespread transformation with the legal system and our politics. It’s basically just switching our diet.”

Tackling climate change requires a focus first and foremost on transitioning away from the use of fossil fuels like coal, gas and oil. This will mean a serious challenge to the profits of major corporations.

But emissions from animal agriculture do need to be addressed. Climate research group Beyond Zero Emissions’ Land Use Report does recommend reducing herd numbers, and therefore eating less meat.

But it also suggests changes to production methods like rotational grazing (rather than burning used pastures), feed changes, selective breeding, conversion of methane to bio-energy at piggeries and practices which increase soil carbon. Such changes would need “very significant investments” and require political change.

Not only does this film have no solutions to the climate crisis, it points in entirely the wrong direction: blaming ordinary people, ignoring fossil fuels, and letting corporations, politicians, and capitalism off the hook.