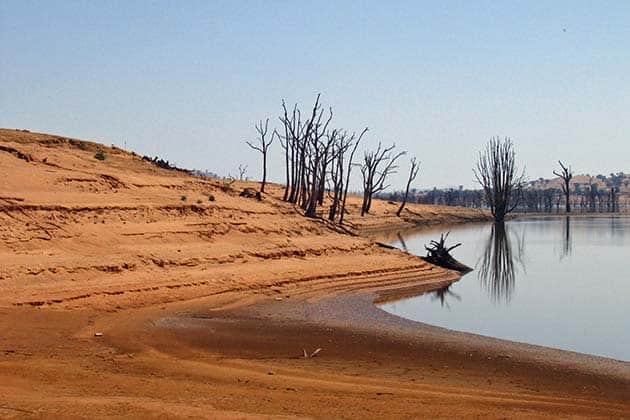 The spectre of climate change haunts global politics. In Australia, Turnbull has deceptively used the power outages in South Australia to try and undermine renewable energy, while offering a billion dollar government loan to the proposed Adani coal mine.

Ian Angus’ new book Facing the Anthropocene will aid anyone who wants to fight governments that put profit before planet. It will serve as an introduction for many activists to the scientific concept of the Anthropocene—a new geological era that has no analogue in the Earth’s history.

Climatologist Will Steffen and colleagues write, “The term Anthropocene… suggests that the Earth has now left its natural geological epoch, the present interglacial state called the Holocene. Human activities have become so pervasive and profound that they rival the great forces of Nature and are pushing the Earth into planetary terra incognita”.

Angus argues that the scale of unplanned production for profit is causing a crisis of the Earth system itself. The threat of dangerous climate change is just one aspect of this crisis facing nine important “planetary boundaries”. The others are stratospheric ozone depletion, ocean acidification, biodiversity loss, biogeochemical flows (nitrogen and phosphorus), freshwater use, land-system change, atmospheric aerosol loading and the introduction of novel entities (like chemical pollution).

Angus argues that four are in the danger zone with three more on the way and that, “although the planetary boundaries are defined separately, in reality they are tightly linked”.

When did the Anthropocene begin?

Angus writes, “For geologists, formally approving the Anthropocene is not like applying a faddish label to a current trend… It would mean declaring, on clear scientific criteria, that the present is as different from the Holocene as the Holocene was from the Pleistocene before it.” Such a change is a major event: the Pleistocene lasted for over two and a half million years.

There is a growing consensus that the Anthropocene began following the Second World War. This has become known as “The Great Acceleration” based on graphs published by the International Geosphere-Biosphere Program. These displayed physical changes in the Earth system showing gradual growth from 1750 and a sharp upturn in about 1950.

Since 1945 industrialisation based on fossil fuels has taken root on a global basis.

All in it together?

Angus writes, “The search for the social and economic origins of the Anthropocene is very different from the search for its geological beginning.” Importantly he explicitly pins the blame on capitalism and its rulers for the crisis. He explains in detail how the problem is capitalism’s drive for profit combined with the way fossil fuels are built into the heart of the modern economy.

He writes, “Globally, there is more capital invested in oil and gas than in any other industry. If state-owned oil companies are included, oil and gas capitalization totals about $6,729 trillion, more than all the world’s banks combined.”

And also, “if a corporate executive has an inconvenient attack of conscience, he or she will not last long in that position… when protecting humanity and planet might reduce profits, corporations will always put profits first.”

Political leaders won’t act because they and their nation’s corporations are locked into competition with other states. Economic competition also means military competition, another vast user of fossil fuels.

Angus quotes researchers who wrote in 2010 that, “Today the U.S. military is the world’s largest user of petroleum, and the largest polluter, producing more hazardous waste than the five largest U.S. chemical companies combined, and the largest producer of greenhouse gases.”

Naming this new period the “Anthropocene” is not intended to cast the blame on the whole of humanity, he says. A close look at the scientists’ work shows the opposite. Angus quotes several passages from a key book on the science of the Anthropocene, Global Change and the Earth System, which argues that in, “a world in which the disparity between the wealthy and the poor, both within and between countries, is growing, equity issues are important in any consideration of global environmental management.”

The movement we need

Angus is for building a movement for change in the here and now, and ultimately for a new kind of society that he labels “eco-socialism”. His distinguishes “eco-socialism” from “productivist socialism” in part because of the mistaken identification of Stalinist state capitalist regimes like Cuba and the Soviet Union as socialist.

Unfortunately he doesn’t go much further than to sketch out some very general principles for “the movement we need”. Some flavour of the concrete struggles and debates socialists face within the climate movement would have been useful—for instance in the fight against the Keystone pipeline or tar sands in Canada, where he lives.

He rightly proclaims opposition to market solutions and carbon trading, but doesn’t flesh this out. Support for a market solution in the form of a carbon tax crippled the climate movement here in Australia.

His long outline of what governments should do doesn’t suggest any strategic focus for the movement—for instance fighting for governments to directly build renewable energy, or working within unions to campaign for climate jobs.

But the book does face up honestly to the crisis for the Earth system. It’s a well-written popularisation of important new science that belongs on the shelves of climate and environmental activists.

Facing the Anthropocene: Fossil Capitalism and the Crisis of the Earth System
By Ian Angus
Monthly Review Press, $30