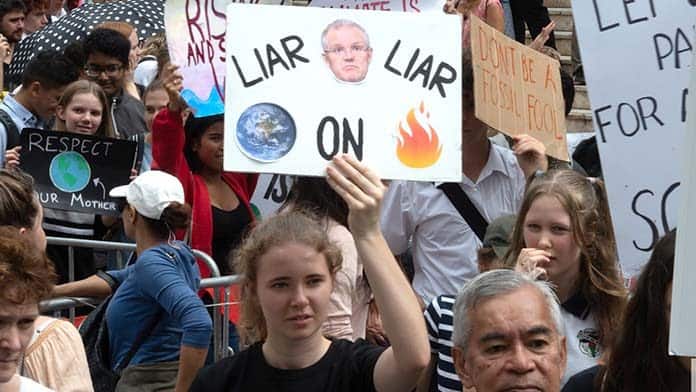 Catastrophic bushfires fuelled by extreme heat have swept through northern NSW and Queensland—even before summer has officially begun.

Four people lost their lives and almost 500 homes have been destroyed.

Scott Morrison and the Coalition are desperate to shut down discussion of the link between the fires and climate change.

Instead the Liberals are lashing out against climate activists, promising new laws to stop consumer boycotts against corporate climate criminals like Adani and their contractors. Laws like these would have criminalised the boycott of apartheid South Africa or fashion brands that use slave labour.

While they deny any connection, yet another report in November fingered Australia as among the G20 group of economies “furthest off track” on meeting its Paris targets, with the second most emissions intensive energy sector among the group.

Deputy Prime Minister Michael McCormack even denounced the idea climate change was a factor as the, “ravings of some pure, enlightened and woke capital city greenies”. Other Nationals including NSW leader John Barilaro and Barnaby Joyce have tried to blame The Greens, recycling the old myth that they were stopping backburning in national parks. Barnaby Joyce disparaged two people who died in NSW saying they “most likely” voted for The Greens.

But the NSW Coalition has actually cut the number of park rangers, who carry out reduction burns, by a third since 2011. The parks service has been unable to meet reduction burning targets this year because of the cuts, the Public Service Association says, including a budget cut of $80 million this year.

The state government has also cut $40 million from Fire and Rescue and the Rural Fire Service budgets compared to last year.

Morrison’s efforts to avoid the climate issue have fallen flat after former NSW Fire and Rescue Commissioner Greg Mullins went public to say the coming summer was set to be “the worst I have ever seen” and was part of “a new age of unprecedented bushfire danger”.

NSW issued its first ever warning of “catastrophic” conditions in November, the first since the new warning level was introduced in 2009.

The fires we are seeing are far from normal. The bushfire season is starting earlier and running longer, beginning in September this year in eastern Australia—far before summer had begun. The current drought has produced the lowest rainfall on record between January and August across the Southern Downs in Queensland and the Northern Tablelands in NSW.

Meanwhile the economy is getting worse. Wage growth in the private sector is down again. Interest rate cuts and tax cuts have done little to increase consumer spending. Yet the Morrison government is refusing to bring forward government spending.

Instead they are continuing their war on unions with the Ensuring Integrity Bill—a further attack on the right to strike. Their new proposal for a demerit points system could ban officials after two or three breaches of industrial laws, including late filing of paperwork such as annual reports.

But its real target is union militancy in defiance of anti-strike laws. In November the NUW was fined $173,000 after taking strike action in response to Woolworths’ effort to make all new staff labour hire casuals—because the union wasn’t in a bargaining period. Australia’s anti-strike laws are now so draconian that such actions require breaking the law.

The Coalition’s other line of attack on climate action is to present it as a threat to jobs and regional communities—the same line they ran on Adani during the election. Energy Minister Angus Taylor seized on suggestions that the Portland aluminium smelter in Victoria could close to blame energy costs for threatening jobs.

Taylor claimed more serious climate targets would mean, “killing off these export industries and the regional jobs that go with them.” But power prices are only high because of privatisation and the decision to turn the power system into a plaything for the free market.

Instead of standing up to them, Labor remains in retreat. Its election review confirmed the party’s move to the right.

Instead of rejecting the Liberals’ attempt to muzzle debate about climate change’s role in the bushfires, Albanese weakly insisted, “I’m not seeking to politicise this at all”. Instead of arguing for a job-creating transition to renewable power, Albanese has conceded to the Liberals’ attack over jobs, saying he wants coal and gas mining to continue indefinitely.

The money needed to transition to 100 per cent renewable energy should come from taxing the rich and big business—including the super profits of the power companies.

It is the Liberal government in NSW that is responsible for destroying jobs in fire risk management. The immediate need is for more funding for firefighters and hazard reduction work. This means not only reversing the cuts but more jobs to deal with the consequences of a hotter climate. This could mean jobs on country for Indigenous communities to help care for the land as well as more staff in national parks.

The fight for jobs and a just transition should be at the centre of the climate movement’s demands.

Such a commitment is crucial to winning support—including amongst the workers and regional communities that delivered Morrison’s election win. It is something unionists would be willing to fight for—and it is organised workers who have the industrial power that we need to force change.

A fight from below is going to be needed to halt Labor’s slide to the right. While Morrison is on the offensive, the official union campaign against the Ensuring Integrity Bill has been confined to lobbying and an online campaign.

Strike action can win gains. Almost 1000 workers at a Woolworths’ warehouse won a pay rise of 8 per cent in the first year of their new deal after threatening indefinite strike action. Workers on offshore oil and gas platforms won an immediate 20 per cent pay rise in their new agreement.

This is the kind of action needed to end stagnating wages, defy the Liberals’ anti-union laws and build the fight for real action to stop climate change.