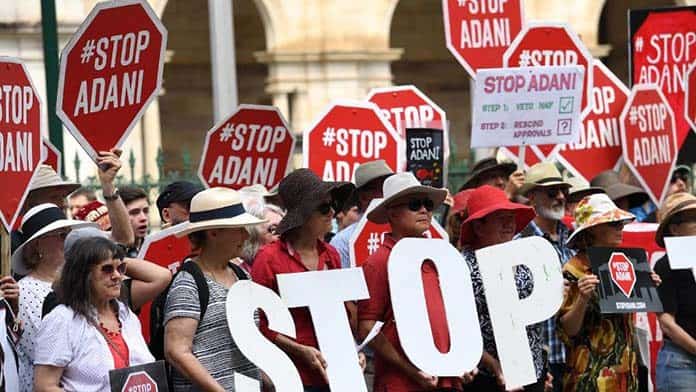 If the Adani Carmichael mine goes ahead it will be one of Australia’s biggest coal mines, despite December’s announcement scaling it down.

The Liberals and Scott Morrison support Adani and Labor has refused to come out clearly against it.

The campaign to stop the Adani mine has been the most prominent environmental campaign in Australian politics in recent years.

For those concerned about stopping runaway climate change, stopping Adani has become a common sense demand.

The mine should be stopped. It would destroy the environment that surrounds it, trample on Indigenous rights and create a huge amount of emissions. But there is a big gap between Stop Adani and the kind of platform of demands we need to stop runaway climate change.

Last November’s phenomenal school strike for climate opened up space to discuss what a more comprehensive platform of demands for climate action would like. Not only was the strike a massive success that humiliated the Liberals, it put forward the demand for 100 per cent renewable energy by 2030.

In and of itself campaigning against Adani’s plan to export coal from the Carmichael basin doesn’t get us any closer to reducing Australia’s domestic emissions or to 100 per cent renewable energy.

Yet this is what will determine whether Australia meets its international targets and plays any part in forging a global response on climate change.

Australia’s existing emissions are disastrously high. In February Environment Minister Melissa Price tried to paint a picture of falling emissions. She pointed to a decline in the last three months, driven by declining electricity emissions. But the same report shows that emissions increased over the last year, continuing the pattern of increases over the last five years.

On an annual basis emissions from stationary energy rose 5.8 per cent over the year. This includes industrial combustion of fossil fuels, for example in the steel industry. Fugitive emissions from coal mines and gas facilities also rose 7.3 per cent. A massive 20 per cent increase in LNG exports helped drive these increases.

The overwhelming focus on Adani—an Indian company planning to extract coal for export—can also give legitimacy to the idea India and China are to blame for climate change. Western leaders promote this idea to avoid taking action themselves. Australia is not doing anywhere enough to transition and has some of the highest per-capita emissions in the world.

A climate campaign has to be focused on demands against our own polluters if we are going to cut carbon emissions in Australia to the necessary levels.

Another major problem with the overwhelming focus on Adani is that it locks supporters of climate action into an anti-jobs position.

A movement that says “Stop Adani” but is not committed to fighting for jobs won’t get a hearing with organised workers.

Most of the Adani campaign materials focus on how few jobs the mine would create. But even if the lower estimates of around 1500 jobs are right, those who want climate action shouldn’t be indifferent on this question.

In central Queensland mining—and associated services and manufacturing—are a core area of employment. The Queensland mining division of the CFMEU has unfortunately come out in support of Adani on the basis that it will provide jobs for miners.

The climate campaign needs to be a campaign for jobs. One CSIRO study estimated that the action needed to cut carbon emissions could generate between 230,000 and 340,000 additional jobs. The movement for climate action needs to take working class demands and issues like electricity prices, living standards and jobs seriously.

To extend the climate movement beyond schools and universities we need to win support. Workers’ strike action will be necessary to win climate action.

We should demand government investment to build renewable energy generation, massively expand public transport and retrofit buildings to improve energy efficiency. And we should tax corporations and the rich to pay for it, instead of pushing the burden onto ordinary people. The discussion in the US around a Green New Deal has put demands like this on the agenda—and linked them to creating well-paid jobs.

There is certainly a need to keep coal and fossil fuel deposits in the ground. According to research by Oil Change International, “The potential carbon emissions from the oil, gas, and coal in the world’s currently operating fields and mines would take us beyond 2°C of warming”, far beyond the much safer 1.5 degree target.

To avert climate disaster we need an immediate, just transition to 100 per cent renewable energy through massive government investment. And we need a movement that demands it, backed up by working class power.