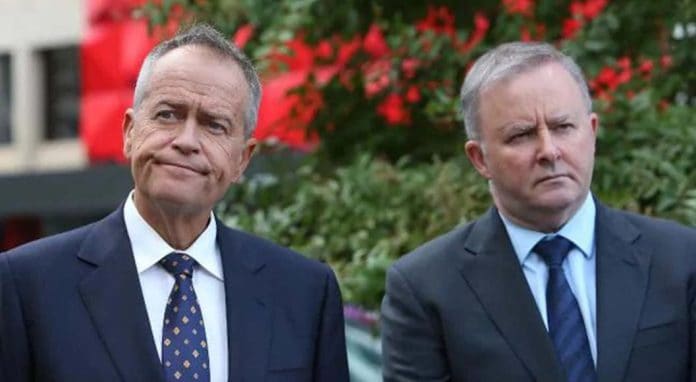 Labor was unable to win over working class voters at the election with its promises of change—reflecting long term decline in its class roots and credibility, writes James Supple

After its unexpected election defeat, Labor is thrashing around trying to understand what went wrong. It wasn’t simply regional and mining areas in Queensland that lost it the election.

In seats across the country Labor failed to win the swing it needed. Many marginal seats even saw swings to the Liberals. Labor went backwards in every state and territory except Victoria, South Australian and the Northern Territory.

This came despite Labor’s tack to the left and promise of a significant increase in spending on schools, hospitals, TAFE, childcare and pensioner dental care.

Many workers voted against their own interests to back the Liberals. In NSW, Labor suffered larger swings in the poorer areas of marginal electorates like Lindsay and Banks. Polling booth data examined by the Grattan Institute’s Carmela Chivers shows that every income group except the top 20 per cent swung to the Liberals.

It’s clear many working class voters simply did not believe Labor’s promises—and some saw Labor’s tax changes, such as over franking credits, as a sign it would attack retirement incomes more generally.

One key reason is that Labor never clearly argued for taxing the rich. Instead it often justified its changes as simple “fiscal responsibility”.

But it also reflects the disillusionment with Labor that has been growing since the 1980s and is compounded by declining union membership and strike figures.

This is part of a deeper disillusionment with the political system and the major parties. The Australian Election Study carried out after the 2016 election by ANU academics shows that 74 per cent thought people in government look after themselves, and that just 14 per cent believe politicians know what ordinary people think.

Labor’s membership and its base in the working class are in long term decline. In the past Labor could rely on its own mass membership as well as trade union networks to help carry its arguments deep into working class communities.

When unions were leading strikes that fought for improved conditions, the connection between the unions and Labor gave workers more confidence that a Labor government would represent workers’ interests. This is much less true today.

Former state government minister Rodney Cavalier has listed 100 branches in NSW that folded between 1999 and 2009, and claimed there were just 1000 members in the state who “play any sort of active role in the party”.

Labor’s formal membership has remained around 45,000 since 1955, despite the country’s population almost trebling. And just 30,426 bothered to vote for the party’s leader when given the opportunity in 2013, suggesting the figure is inflated by branch stacking.

But union membership has crashed in recent decades. In 1980 around 50 per cent of the workforce were union members. This has fallen to just 15 per cent today.

Labor’s “rusted on” vote has also steadily ebbed away. The percentage of the population who said they always voted Labor has fallen from 33 per cent in 1979 to 16 per cent in 2016. Its primary vote this election was just 33.3 per cent nationwide, a fraction above its worst ever figure in 2013.

This decline is the result of Labor governments since the 1980s embracing neo-liberal policies and attacking their own supporters.

The neo-liberal agenda pursued by both major parties has increased inequality, forced people to work harder, and produced a decline in public services.

This began during the 13 years of Labor government under Bob Hawke and Paul Keating from 1983. Labor abandoned policies that it had once been known for—such as public ownership of assets, and increased spending on services and the welfare state—and embraced policies in the interests of big business.

There was a ruthless policy of wage cuts and trading off conditions under the Accords, designed to boost profits and restore the fortunes of Australian capitalism. Whole industries were restructured, at the cost of thousands of jobs, and privatisation began in earnest.

The steepest drop in membership as a percentage of the workforce took place during Labor’s time in government between 1983 and 1996.

The experience of Labor in government federally just six years ago did equally little to inspire support. Kevin Rudd built up people’s hopes for change but then spectacularly failed to deliver.

Social researcher Rebecca Huntley says Rudd’s election in 2007 is the only time she has witnessed a widespread sense that people, “felt they were voting for something, rather than against someone”.

People remember not simply the divisions between Rudd and Gillard, but a government which made big promises while doing little to improve workers’ lives. Labor even imposed cuts to single parents’ payments and universities, as well as a carbon tax that was designed to drive up power bills, and set back the climate movement by insisting that workers would have to pay for climate action.

Labor’s recent record of betrayals in government is not unique in its history.

Every Labor government has eventually attacked the working class voters that put it in power. Labor Prime Minister James Scullin, in power during the 1930s Depression, imposed vicious cuts to government spending and wages. Even Gough Whitlam handed down a budget before his dismissal in 1975 that slashed spending in response to the end of the post-war boom.

Labor’s commitment to working within capitalism means that, in times of economic crisis, it chooses to impose policies in the interests of big business and the rich in the hope of nursing the system back to health.

But the long-term crisis of capitalism since the end of the post-war boom has reduced the space for Labor to deliver reforms that improve workers’ lives.

This is playing out across the developed capitalist world. Social democratic parties like the Labor Party have imposed drastic austerity measures and moved so far to the right that a major gap has opened up between the expectations of their supporters and what the parties will deliver.

Some have practically imploded. In Greece the equivalent of the Labor Party, PASOK, saw its vote collapse to 6.3 per cent at the last election. The French Socialist Party fell to fifth place in the 2017 presidential election with 6.4 per cent of the vote.

New parties of the left and the right have also made electoral breakthroughs as politics has polarised—similar to the process here where the share of the vote of minor parties like The Greens and One Nation has grown over time.

The Liberals also have their own problems with their membership and support base. But this is a much more serious issue for Labor.

The Liberals are the direct political representatives of big business and therefore the preferred option for corporations and the rich. They normally receive the support of the bulk of the mainstream media. Their ideas represent the common sense of capitalist society.

By contrast Labor was founded to represent the trade unions officials and their base in the working class.

One of Labor’s main explanations for its election disaster has been Clive Palmer’s $70 million advertising splurge.

Bill Shorten said Labor had been the victim of “corporate leviathans” like Murdoch’s News Corp and a “financial behemoth” in Palmer.

Labor’s capacity to push back against these interests relies on working class people recognising, at least to some degree, that they have class interests distinct from those of big business.

This understanding is strongest when the working class is organised and has experience of class struggle.

Labor is a reformist party that works within capitalism.

Outside of revolutionary situations, support for reformist politics is the main product of workers’ involvement in struggle.

This fits with the experience of workers who can see that the system works in the interests of the bosses, and produces inequality and oppression—but at the same time accept the continuation of capitalism.

The Labor Party emerged as a result of the class struggles in the 1890s, following the development of trade unions and their defeat in a series of major strikes.

It was this involvement in struggle against the bosses that led wide layers of workers to understand the need for a working class party.

Labor’s membership reached its height in the period after the Second World War, as workers went on the offensive to make up for the sacrifices of the war years. It also grew during the era of the Whitlam government, fuelled by a high level of trade union struggle, as well as mass movements against the Vietnam War and for Aboriginal land rights and women’s liberation.

Even Kevin Rudd’s election victory in 2007 came on the back of significant trade union stopwork demonstrations against the Liberals’ WorkChoices laws, the largest of them involving 500,000 people Australia-wide.

Labor is far from a finished force. The election result was not a ringing endorsement of what the Liberals stand for. Scott Morrison has just a two seat majority in parliament.

But Labor only has itself to blame for its decline. Its shift to the right will only make things worse. Labor’s failures also show the folly of waiting another three years to elect a Labor government hoping it will be different.

The main task for unions and the left is to build the struggle outside parliament in the workplaces and on the streets. Without this, Labor will have difficulty improving its primary vote and winning government.

The unions will have to take the fight to the bosses if we are going to see the kind of movement that can really fight Morrison and his system he rules for.