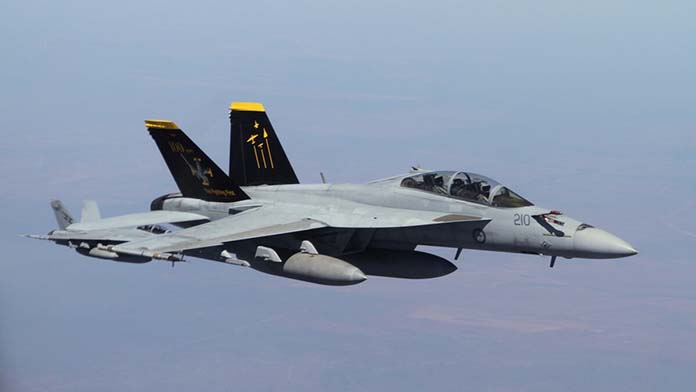 Australia will spend $270 billion over ten years to recalibrate its military strategy and project more power across the Indo-Pacific region, which Prime Minister Scott Morrison says is now “the focus of the dominant global contest of our age”.

Morrison says “We have not seen the uncertainty now being experienced in our region since the 1930s and 1940s” adding “we need to prepare for a post-COVID world that is poorer, that is more dangerous, and that is more disorderly.”

These weapons will target China. They come on top of Morrison banging the drum for an international inquiry into the origins of the coronavirus. The sole purpose of the sham inquiry is to stir racist paranoia regarding what US President Donald Trump has called the “Chinese virus” and “Kung Flu”.

At a time when countries should be cooperating to overcome the pandemic, climate change and species extinction, these announcements highlight the sick priorities of a system based upon racist divide and rule, and competition between states for markets and resources in pursuit of profit.

The $270 billion for weapons could pay for extending both JobKeeper and JobSeeker payments at current levels for another six months more than three times over. It could almost cover the cost of converting the entire Australian economy to 100 per cent renewable energy—estimated at $370 billion ten years ago and $300 billion in a more recent report.

Shamefully, opposition leader Anthony Albanese agrees with Morrison on the coronavirus inquiry. And says that, not only does he support the weapons splurge, but that Labor thought of it first!

Australia’s ruling class has always seen the south Pacific as its own backyard and shown racist contempt for the countries of the region—treating them variously as quarries, sources of cheap labour, or slaves for the early sugarcane industry, military staging posts, and jails for refugees.

Laughably, Morrison claims, “We want an Indo-Pacific free from coercion and hegemony.” But he has no objection to the US military bases in Guam, American Samoa, Hawaii, Japan, South Korea, Thailand and Australia. The US has also re-established bases in the Philippines and is busy expanding its base on Wake Island in the mid-Pacific.

France has a military presence in New Caledonia and conducted nuclear weapons testing on Mururoa Atoll up until 1996.

All this passes without Australian complaint. Along with the US alliance, keeping rival powers out of the region is central to its military and strategic concerns.

In 2018 Australia and the US commenced a naval base upgrade on Manus Island in northern Papua New Guinea. The same year Australia outbid China to fund the upgrade of Blackrock Camp military base in Fiji.

And Australian soft power in the form of regional aid still exceeds that of China. The Lowy Institute estimates that in 2016 China was only the fourth largest aid donor in the Pacific—well behind Australia and trailing New Zealand and Japan.

But the global balance of power is tipping as China’s economic growth translates into military might.

China has accelerated its program of building military bases on islands and reefs in the South China Sea. China’s rulers claim 80 per cent of its area, up to what they call the “nine dash line”. China also claims sovereignty over Taiwan.

In an important speech in 2017, President Xi Jinping announced that China will have a blue water navy comparable to the US by 2035 and should have “resolved the Taiwan question” by 2049. Last month Chinese and Indian troops were involved in a deadly clash on their border.

But Trump has also torn up the Trans Pacific Partnership (TPP) trade deal aimed at providing regional allies with an economic alternative to China. And he has signalled the US may be less willing to foot the military bill to protect allies, claiming the US has been short-changed by such arrangements in the past.

Australia still considers the US alliance as central. But concern about whether it can rely on the US means the Australian ruling class is expanding its military.

Morrison is also exploring new alliances that might help restrict China’s advance. Australia and India signed a military pact in June. And Morrison will soon visit Japan to sign an agreement for co-operation between space agencies to “directly contribute to warfighting outcomes in the space domain.”

Just like other countries, Australia is pursuing its own economic interests and geo-political goals. Far from creating “regional security”, all this is producing growing imperialist tensions and militarism across the Indo-Pacific.

The left needs to oppose Australian imperialism along with that of the US and China. But because socialists are against imperialism everywhere, it can be tempting for socialists in Australia to see American and Chinese imperialism as identical—and to devote equal energy to opposing both. This is a mistake.

For socialists in Australia the main enemy is at home. That means building movements against Morrison’s warmongering, racism, and neo-liberalism is more vital than ever.