Is China really a threat? 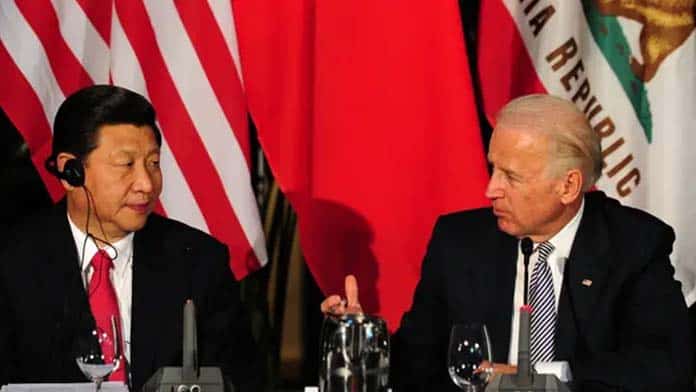 Expanding military spending and locking Australia further into cooperation with the US war machine only inflames the prospect of war in the region, argues Adam Adelpour

The new Cold War between the US and China is a defining feature of politics in Australia and around the globe.

Some claim that Australia needs to arm itself because China poses a threat to freedom, “the rules-based order” and democracy.

Labor’s Richard Marles argued in his first speech in Washington as Defence Minister in July that, “AUKUS will not only make Australia safer, it will make Australia a more potent and capable partner”.

But more US and Australian militarism won’t make us safer, it will intensify the military rivalry and increase the likelihood of war.

China is accused of practising coercion, engaging in malicious interference in sovereign states and harbouring ambitions for regional and world domination. The US and Australia position themselves as defenders of the great and good against China’s authoritarianism.

China’s treatment of ethnic minorities like the Uighurs and Tibetans, as well as its repression of workers struggles and democracy activists, is undeniable.

Since 1945 the US has been the world’s dominant power. Far from promoting democracy and freedom, it has used brute force again and again to tear down anyone threatening its power and profits.

The world is covered in the bloody footprints of the US and its allies, from the Vietnam War, to the illegal invasion of Iraq that left one million dead, to the carnage in Afghanistan and the war crimes whose horrors were revealed in the Brereton Report. These are just the latest in a long list of brutal foreign interventions.

The US emerged as a world power after defeating Spain in the Spanish American War in 1898. It promptly seized Spain’s colonies which were a source of immense profits for US corporations. These included sugar-rich Cuba and the Philippines, where the American war of conquest left over one million dead.

“I spent most of my time being a high-class muscle man for big business, for Wall Street and for the bankers. In short, I was a racketeer for capitalism.”

The US has had no qualms about supporting the violent overthrow of democratic governments, from Iran in 1953 and Indonesia in 1965 to Chile in 1973. Each of these governments (and many more besides) were drowned in blood by US-backed military coups. And the US arms and supports a long list of dictatorships and repressive regimes today from el-Sisi in Egypt, to the monarchy in Saudi Arabia and apartheid state Israel.

Australia has its own brutal history of dominating weaker Pacific Island nations for profit.

For example, Australia seized control of German colony Nauru in 1914. It then strip-mined 80 per cent of the island for its rich and incredibly profitable phosphate deposits to use as fertiliser. Now the phosphate has run out. The island has been left destroyed, with little infrastructure, a 90 per cent unemployment rate and is used by Australia as a cruel dumping ground for asylum seekers.

In the 19th and early 20th century, Western powers used military force to humiliate Chinese governments, loot the country’s wealth and grab control of Chinese territory. China’s rulers today are well practised at using this history to mobilise the population in their support.

Continued Western aggression just gives Chinese President Xi Jinping ammunition to whip up nationalism and use it as a pretext to crush dissent.

Military mobilisation against China by the US and its allies is not primarily aimed at defending freedom and democracy from Chinese authoritarianism. Its aim is to defend a global imperialist rules-based order in which the US sets the rules.

The US emerged from the Cold War and the fall of the USSR in the early 1990s as the world’s sole and unrivalled super-power. It views China’s rise as a challenge to its dominance. According to a Lowy Institute report China is set to, “overtake the United States to become the world’s largest economy in nominal US dollar terms by about 2030”.

President Joe Biden says the US is in “a competition to win the 21st century” with China, and is continuing Donald Trump’s trade war in an effort to stop China matching the US’s lead in high technology industries.

China’s economic rise has been accompanied by an increase in its military capacity. But the US still maintains an overall military superiority by a large margin.

The US has a belt of 750 military bases circling the globe, while China has just one foreign military base, in Djibouti.

The US has stepped up aggressive naval operations in the South China Sea and has boosted its military presence in the region. This creates a tinder box for future military conflict.

This has been accompanied by an increased flexing of hard military power. The same report says that in 2021 four separate US Carrier Strike Groups entered the South China Sea a total of ten times. This is almost double the figure for 2020.

A Carrier Strike Group is an immense show of force. It consists of an aircraft carrier housing up to 6000 personnel and up to 70 aircraft, usually alongside a squadron of destroyers and a cruiser. Imagine the hysterical response from Western leaders if China dared to mobilise a similar naval force off the coast of the US or Australia.

Militarism is the real threat

Australia under the ALP has doubled down on its ties to US imperialism and belligerence toward China. As Richard Marles put it in his Washington speech:

“Today there is no more important partner to Australia than the United States. The US-Australian alliance has become a cornerstone of Australia’s foreign and security policy”.

Australia is already deeply tied into the US military machine, hosting key surveillance and tracking bases like Pine Gap. Thousands of US marines already rotate through Darwin, with plans to further expand the US military presence with deployments of warplanes and US naval assets.

Australia is engaged in its own military build-up bigger than anything seen for decades. The government is increasing military spending to at least 2 per cent of GDP and wants to acquire nuclear submarines at an estimated cost of at least $170 billion.

More military ties with US, more weapons and the purchase of nuclear subs are not about keeping Australia safe. They simply fuel the arms race with China, inflame the military rivalry and make war more likely.

The AUKUS pact signed in September last year was a dangerous escalation. Albanese backs it to the hilt. It will see Australia become only the seventh country in the world to acquire nuclear submarines, a new East Coast nuclear submarine base, increased military co-operation with the US and UK and the presence of nuclear-weapon capable submarines in Australian ports.

Part of the rationale for Australia pursuing nuclear subs is that they can operate hidden, close to China’s coast for many months because they don’t have to re-surface as often to refuel.

China’s military efforts are overwhelmingly directed at the first island chain off its coast.

Even many pro-war sources concede a direct military threat from China against Australia is remote. Dr Alexey Muraviev is Associate Professor of National Security and Strategic Studies at Curtin University admits that China has no history of overseas military interventions saying it, “lacks operational combat experience, including in managing expeditionary operations.”

It is the US that has encircled China with military bases and alliances and is concentrating aircraft carrier strike groups off its coast. Despite its overtures to Pacific Island nations and growing military power, China is not capable of, nor interested in, directing a comparable level of military aggression at Australia.

China’s rapid economic growth has changed its relationship to the rest of the world. It is now a rising imperialist power.

While previously its economy was relatively self-contained, today it is dependent on global shipping routes controlled by the US. This is a key part of what has driven China to expand its military so rapidly.

The classical Marxist theory of imperialism explains that due to capitalist competition the world becomes a battleground where major powers whose giant companies have outgrown national borders fight for control.

As the Marxist theorist Bukharin put it: “The struggle between state capitalist trusts is decided in the first place by the relation between their military forces, for the military power of the country is the last resort of the struggling ‘national’ groups of capitalists.”

This dynamic is what lies behind the growing conflict between the US and China.

A US naval blockade would now be devastating to China. For example, in 2019 Chinese crude oil imports were the highest in the world at ten million barrels per day. Eighty per cent of this imported oil travels by tanker in the Indian Ocean through the sea lanes in the Malacca Straits.

In 2016 roughly $874 billion in exports from mainland China passed through the South China Sea, primarily through the Malacca Straits as well.

This reality has driven China to claim the majority of the South China Sea by building military bases on atolls that are also claimed by Vietnam, the Philippines, Brunei, Malaysia or Taiwan. China is also trying to cut deals and carve out it own sphere of influence across the world in competition with the US and other powers.

There is a rotten history in Australia of governments using racism to bolster Australian militarism. The supposed threat of the “yellow peril” was used to support Australian military intervention alongside the US in Vietnam.

In Australia the real threat that has to be addressed is our own government’s growing militarism and the immense, dangerous and wasteful expenditure on war.

Workers in every country have no interest in war or militarism. We need to urgently build an anti-war and anti-imperialist movement in Australia to oppose the threat of our own ruling class. 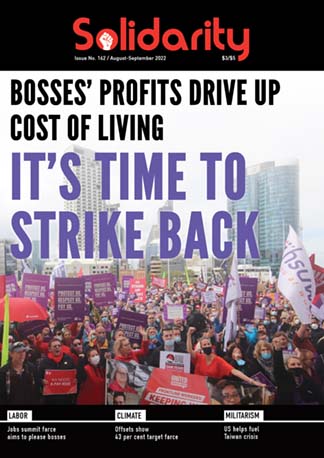 Nancy Pelosi’s provocative visit to Taiwan in August has signalled a dangerous new phase in the rivalry between the US and China.

Anger at lockdowns in China fuels dissent against the regime

After two months of total lockdown, some semblance of normal life has started to return for most of the 28 million people who live in Shanghai, China’s largest and richest city.